Ok so I keep breaking my Solid Carbide 2 Flute Straight End Mill. I looked on the forums but my break is happening at an odd spot and wanted to see if anyone could help me out / let me know what I’m doing wrong.

I was cutting some MDF for a lettering sign I was making today and it was only .25 thick. Almost at the end of the cut it decided to snap. I have included a picture of everything I use and where the break took place. 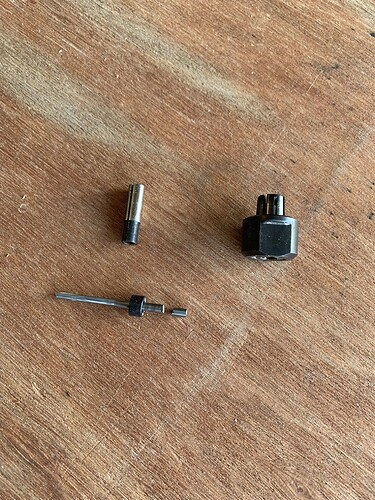 Are you inserting the adaptor the way it is in the photo, with the dark end down? 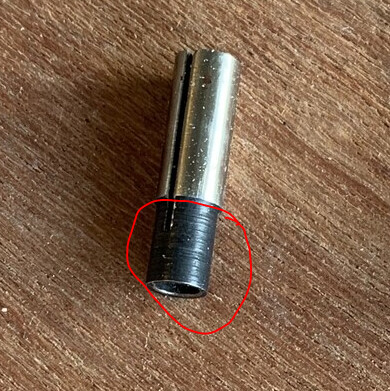 This is how I place it in 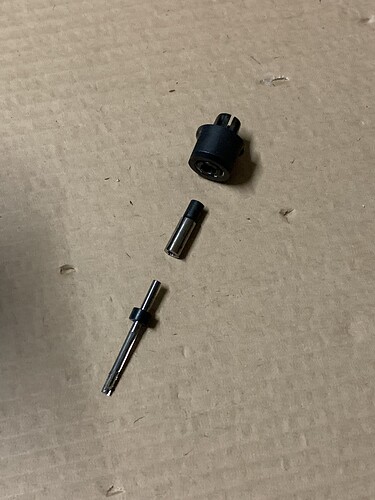 I had exactly the same issue with the “black” bit, and afterwards some unevenness inside the adapter, I tried to file that even, but again -and only this type- broke.

I think it is because of the rather short distance that bit can be inserted due to the black “collar”.

I bought some same bits from another manufacturer, and replaced the collets, and hope with inserting the bits deeper into the collet that does not happen again.

And yes, I think that is clearly due to a misfit of that bit and adapter. With my system it happened aso with the precision collet, so I think change of the bit brand will make it.

Anyway I think the best bits ever are the “o”-type ones. Excellently with plastic, and tried some cuts with wood too, came out ok.

Btw: the dark side of the adapter should pint upwards, not down, since the clamping side must point downwards.

What o type are you talking about? Could you post a link. Also the way I have it set up in the picture is correct right? You are saying the dark side of the adapter should point upwards so according to the picture it is upwards or am I missing something?

I think on the second image, where you said it is as you do it, you did it right. I think this link

CNC Router Technical Tip: When do I Use an O Flute Bit?

If you’re in the business of making signs, you may already have a vast array of tool bits that you use for clean cuts and finishes. If your tool box doesn’t include

I had the same problem with the 8th in bits I purchased from inventables so I finally got tired of having to start a cut over. Got on the computer and found a place that sells them in a ten pack. I have not had one of them to break so I did the same for 1/6th in and have had no more problems breaking