Needs a bit of work, probably need to get away from Easel unless changes or apps can be written to remove Z movement and replace with PWM control mid job.

5 Likes
Do inventables sell a laser for x-carve? anyone got experience buying laser in UK?
Glowforge laser
Hawkdriver August 7, 2015, 2:17am #2

I can see this in my future…nice!

@IanWatkins - Would that thing be able to cut 1/8 birch ply?

Edit: Well, nevermind - I just saw your post in the other thread that it cuts 1/8" birch ply.

It burns it and marks it just fine. Cutting all the way through is a test for tomorrow. When I said cut on the other thread I meant with the spindle and bit.

Do update us on how a full cut test goes. This looks like one of the more interesting potential add-ons for my machine.

Will do Alan. Didn’t get a chance today but tomorrow is high power testing and cutting day.

@IanWatkins is this one that you have? http://jtechphotonics.com/?product=2-8w-445nm-9mm-laser-diode-and-2-5amp-adjustable-driver-kit-with-us-style-power-adapter

I’ve simply hooked the laser control up to the terminal block on the front of the X-Carve spindle control from the GSheild. I issue a M3 S18000 command for laser on (at full power) and M5 to switch it off. And M3 S1200 for a low power laser on for focusing/zeroing the laser. And of course switching the spindle off, I.e, from logic to off.

After that, it’s just software. You can use Easel just fine for marking and cutting, in fact I’m doing it on purpose. But if you want photo engraving, optimised fills etc. you need other software.

Of course, you’ll need to make a mount for it, but it’s very light, so no great problems there.

Now to find the optimum speeds and feeds, as usual. 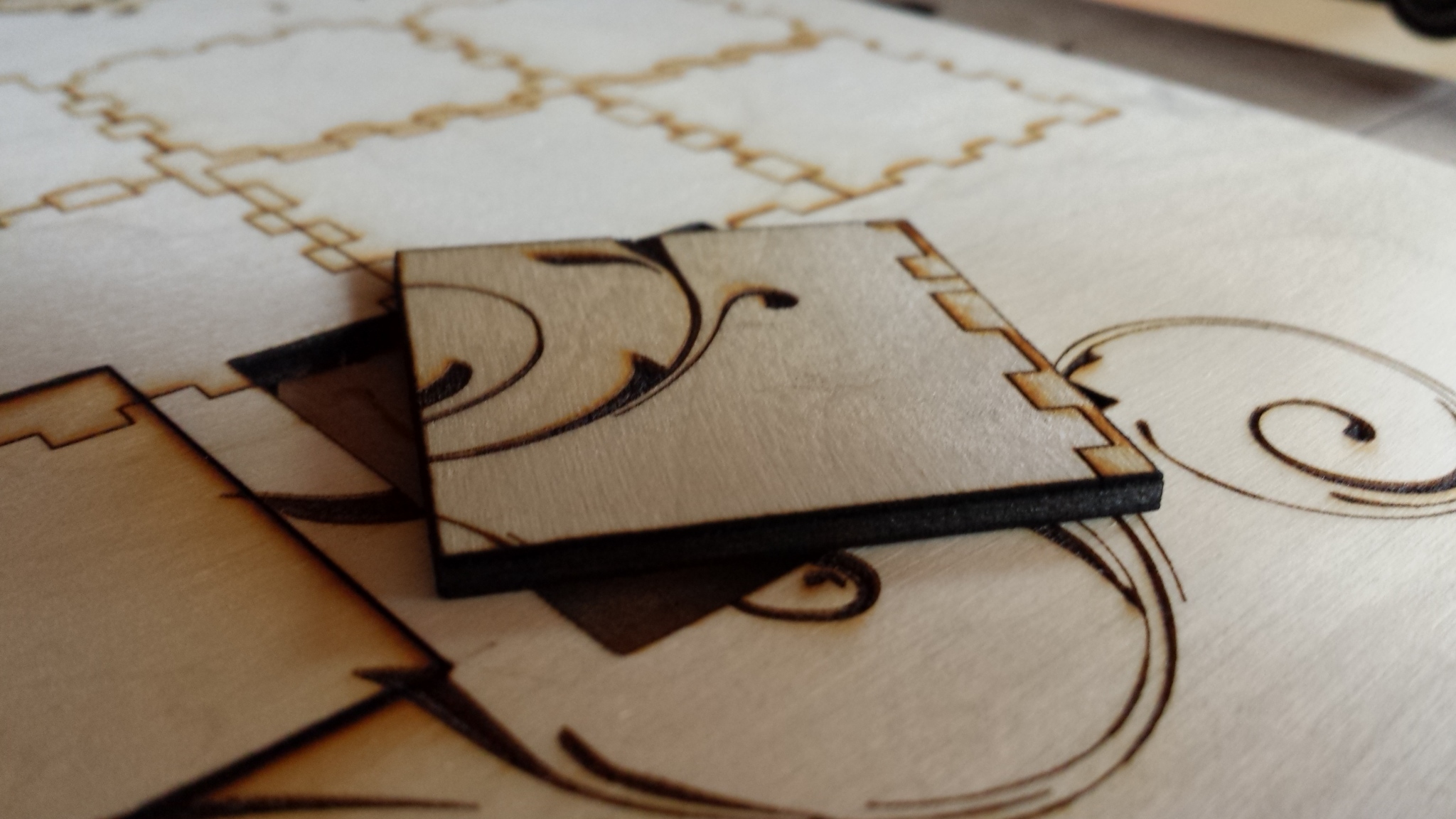 So it’s not winning speed comps but for delicate work where slamming an end mill into the piece isn’t going to work it may be an option.

Way cool. Looks like you have been playing with MakerCase as well.

I did indeed. Very good it is too. 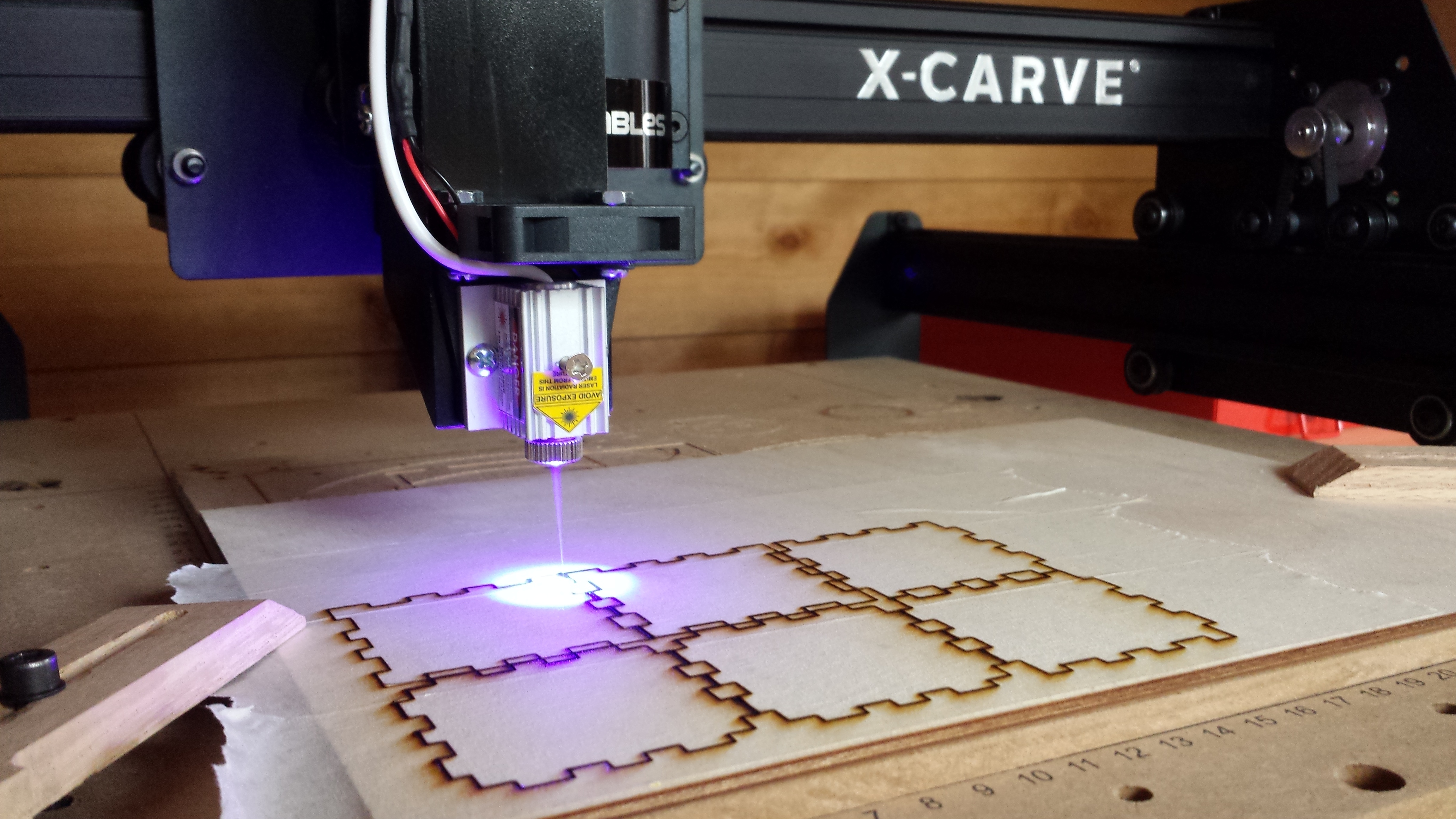 @IanWatkins - you’re awesome! Thanks for the update and pictures.

When I was starting out looking for a machine, I was choosing between laser and CNC. I saw more potential in the CNC and a cheaper price…but for $350 more I can do BOTH.

No worries Alan. I’m very impressed with this kit from JTech. Little bit of thought, some simple cabling and I think I can more tightly integrate it all together.

As I say, it’s never going to replace a big CO2 laser if you need it all the time but as just another tool in the arsenal it’s brilliant.

Oh, and finished item shot (I always forget this). 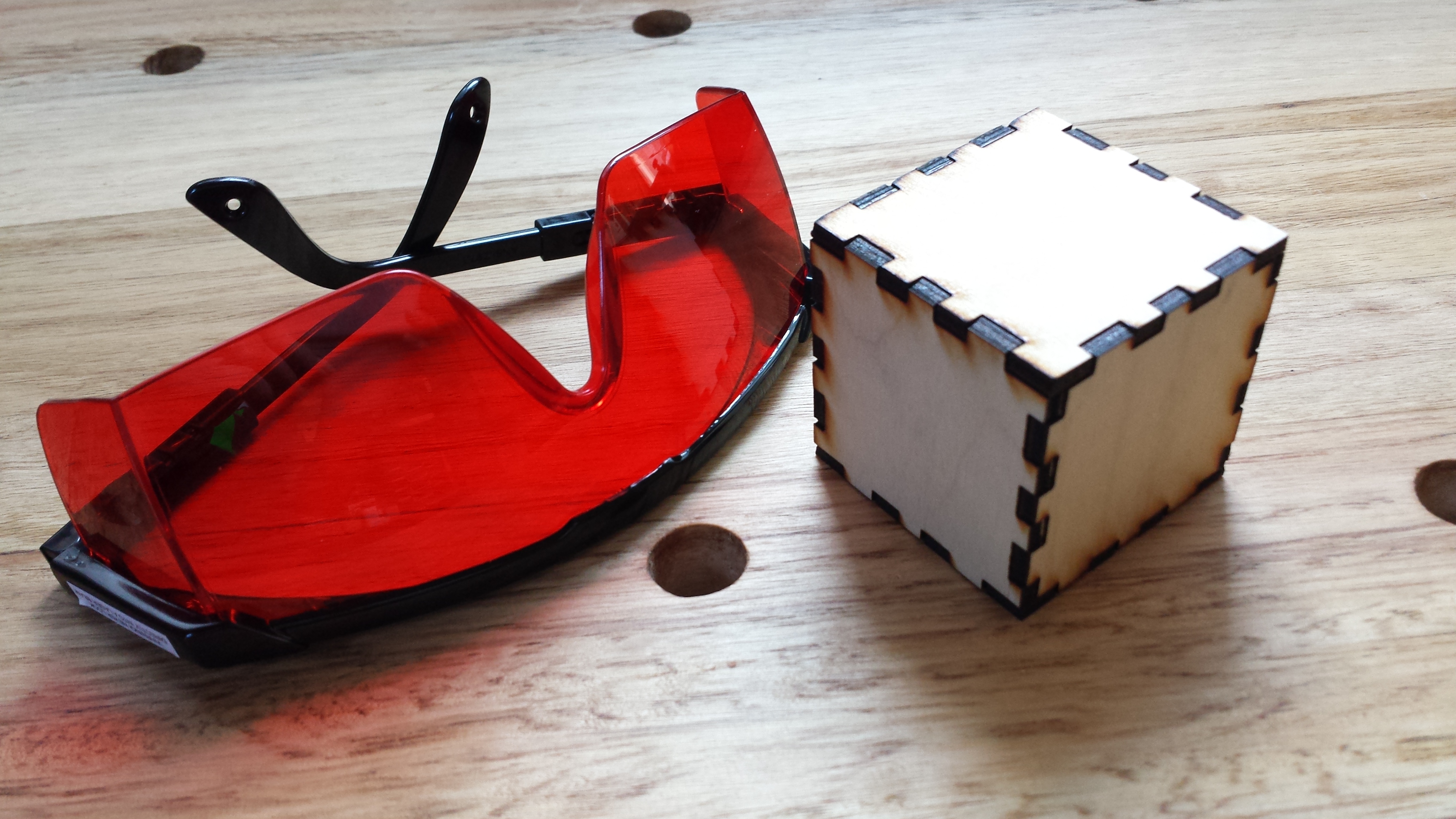 thats a pile of WIN right there.

Angus, because the laser is focused to a fine point you do actually need to step down like you would with a cutting bit. If you didn’t it would never cut all the way through in say 3mm birch ply as the beam diverges quickly.

Hope this shows the beam divergence: 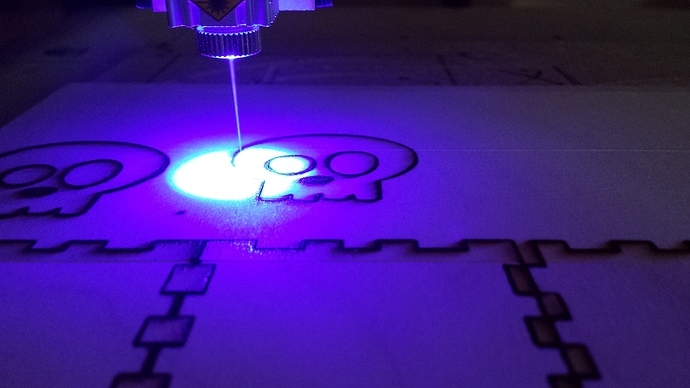 We use a 3" focal distance when image engraving with the J-Tech laser and is more forgiving if the substrate we are engraving on is not very flat. We tried it at two inch and we could not get the beam to focus as small as using a 3". We never tried it at the 1"-1.5" focal height J-Tech recommends, which looks about where yours is set at. In our testing, with a longer focal distance, the angle of the laser beam’s divergence is less coming into the focal point, therefore it has a longer distance the focal point stays the smallest.

We have cut through 1/8" Birch ply with our EmBlaser in a few passes using a 3 element glass lens and the 3" focal height without moving the focal distance down on each pass. The EmBlaser has the same NDB7875 laser diode that is in the 2.8W J-Tech.

With your first cutting pass, do you have the optimal focal point and distance at the top of the substrate, or below the surface of the substrate where the estimated cut depth will be? Have you tried a 3" focal distance yet?

I’ve tried different heights but seem to be getting best cutting performance at 30mm above the surface at the start. I focus on the surface, step down 0.1mm, start cutting then step down 0.2mm each pass.

I understand the theory of being much higher so the beam doesn’t diverge as much and in theory do multiple passes without stepping down at all, but I’m just not seeing the performance.