Just a random thought, but I was thinking about a CNC’s ability to carve a hole with any bit smaller that hole, and how often in my past woodworking I didn’t have the right sized drill bit for a hole I needed. So I was thinking that a potential use of my X-Carve might be one off holes in existing stock. I started to wonder whether or not anyone has tried putting 2 line lasers so that one could jog the machine so that the center of the bit would line up with a center point on the stock. Possibly even mounting one line laser on the carriage on one Y axis (shining in the X direction) and another behind the X carriage shining in the Y direction, that way both would be a accurate despite stock thickness.

Or this could just be a goofy idea.

You would need to mount both on the x rail so they will both track with the movement of the machine.

Unless you put up big bucks for some super accurate lasers, the resolution of the lines may not be as dead on as you hope for but it would get you dang close!

I think toy may be on to something here, My wife just picked up a harbor freight stick on laser line pointer for her sewing machine, I think I may check it out to see how sharp the line is.

BTW no such thing as a stupid or goofy question, but by asking some of them you open yourself to smart ■■■ answers.

i’m pretty sure peolpe have done it. I have 1 laserpointer mounted on my Z-carriage myself. It is not super accurate, bc as Jk pointed out the laser point is not super fine, but it works for a lot of applications pretty well.
Mine doesn’t point at the cutter mark. Its just randomly placed on the carriage, but as long as i can reproduce the X-Y placement I still maintain relatively accurate zeroing.

I happen to be on vacation at Disney World and thought of this on one of their shuttle buses, so I’d say I’m in the one place where a goofy idea is an actual possibility.

an xcarve with mickey mouse ears…hmmmm.

I just found this and it has me thinking. 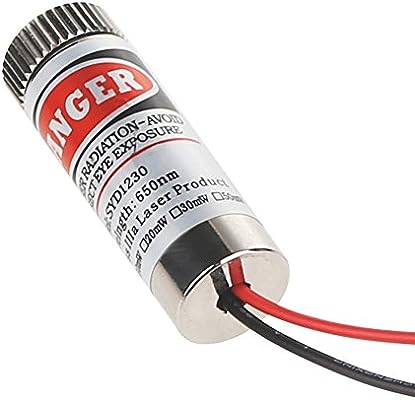 Another way to do this would be using a microscope camera, like this.

I have been using a similar set up with the Chilipeppr.com/xpix to accurately position my spindle to a workpiece (probably within +/- 0.05mm, or right around the tolerance of the X-carve).

I used a cheap laser that is used as a cat toy. Just taped it to the spindle assembly. Found the spot was too big for best locating (I used a 0.7mm pencil for my “X”). Took the laser apart and replaced the target mask with a small piece of vinyl tape which I had pierced with a hot needle to make a smaller hole that works great for relocating and homing.

What would be nice and easy would be a fine dot laser housed in a 1/4" shank that could be chucked up in the spindle. Change the laser out after zeroing x and y, set z zero with the bit in and go. Might be nice if the laser shank had a reduced section of 1/8" so it would work with both collets.

It is not difficult to have the laser mounted to the spindle mount and then just measure the offset. Much easier than loading it the collet and then taking it back out.

yeah there’s some thingiverse objects that do just this, but mostly for lasercutters.
No reason though why it wouldn’t work for a mill

Warning!, not printed yet, the inner part will certainly not fit/slide because I did not adjust it, and was planning to sand it until fit theen adapt model later. This a remix from 3 great design and ideas I found around. The main one is here:...

True that. Once the offsets are known a couple of quick jogs and your on. Much less fiddley. Getting the laser parallel to the spindle might be a bit fussy tho, and if not right on any increase in the z will have a multiplying effect on the error.
I have used a drillpress with crosshairs, I don’t recall how fine the lines were, but I don’t think they could have been reliably accurate to less than 1/16".

I do need to move the Z axis a bit to get the line as focused (thin) as possible but then it is pretty simple to jog till the line just touches the edges of the work. Not hard to get within .1 mm

What is your setup? Are you using the three tapped holes on the left of the spindle mount? Does it work with a dust boot?
I’m sure these answers are lurking behind the search button

I mounted it to the support I made for the dust shoe. 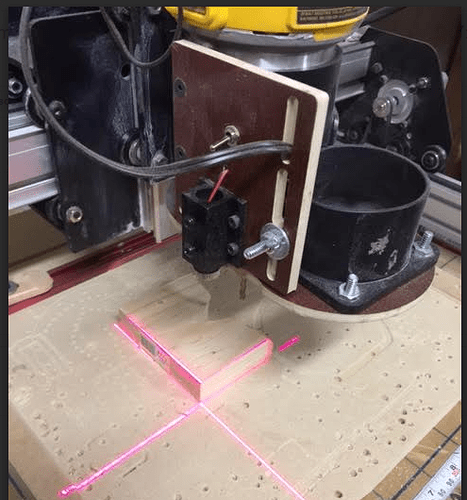 I just read thru your “laser edge finder” post. I like it, It’s something I’ve been thinking about adding, but it has to play nice with a new dust boot I’m going to build.

Dang, didn’t know anybody else did this. Mine looks incredibly similar to @AllenMassey’s. One thing I would change about my design is that I have a recess cut in, where the three bolts are on the spindle mount. This results in the laser being flimsier and therefor less accurate than I would like. Then in UGS, I have a macro set up with the required X and Y off-set. Another thing I have been doing is a test carve in to a waste board and then aligning from there and seems to be pretty accurate. 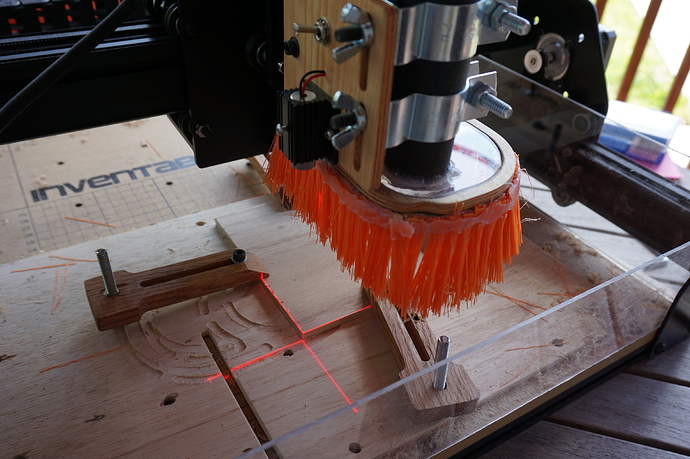 I was going to make a touch probe but this idea looks much easier.
I just have to find a local supplier of these cross lasers as importing one may be a problem if they are considered to be laser pointers.
(Laser pointers over 1mw are a banned import into Australia)

You could still make a touch probe for the Z axis. As far as the laser goes, you could find a local supplier of a normal laser. The part that makes it a cross is the lens, so I’m sure you could have that imported and attach it to the laser that you can purchase.

Good design is obvious to the informed mind.

Did you have a problem with the lens not being able to tighten correctly at the right focus?

Yes, I added some blue locktite to the threads and that seems to have taken care of the problem. I then just leave the focus and adjust the z to make it crisp.