Has anyone attached a Cross Laser Edge finder to their X-Carve? This seems like a really useful upgrade.

height=“500”>Allen, I modified one to help me verify my zero. I haven’t gone back to making the limit/homing switches work yet so I use this as a backup to verifying my position when something goes awry (belt break, dewalt stops spinning, or other recent challenges). I bought the version that you are showing but haven’t installed it since I had the other one in place.

This is the one I bought. I disassembled it, cut it in half on the bandsaw, and then reassembled it so I could mount it to the front of my dust collector. I was initially concerned about the added few ounces at the end of the collector but it hasn’t caused any problems yet.

great idea. I’m upsizing my machine right now so this seems to be a great addition while doing that.

I just ordered this one from eBay. It appears to have a nice mounting bracket, multiple lens to project a cross or a dot and it is only $7

what do you use to power it?

I plan to pull 5 volts off the X-Controller

The one I bought off of amazon had a battery pack with it. There are two lasers and the wiring was pretty simple leading to the battery pack so I opted for the ‘wireless’ option. Wireless meaning no long wires leading back to the Arduino/gshield.

A battery pack may be a good option, I am already knee deep in wires.

Allen, might check out the “New Brit Workshop”. He demonstrates one he added to his X-Carve.

Allen your thoughts and ideas are awesome! Keep 'em coming. I am guessing your machine is looking awesome at this point with the various upgrades.

It has only taken me two years to get it where I can trust it (most of the time) to do what I want.

I can agree with that. Not two years in my case, but since I have had the machine it has been fun tweaking on it. I recently had my dewalt die so I purchased a set of brushes that I think you advertised a while back. I luckily had bought a replacement in the event of the failure so I could continue my project. I have my older one tore down at this point and am waiting on the brushes to come in. I hope that fixes it…assuming I can put the tool back together!

Wonder how hard it’d be to mount a single dot laser onto a 1/4" shaft. When the shaft was put into the collet, the laser dot would show “centre”. It’d be a simple matter to move the dot to whatever spot I chose.

Suspect I’d want a fairly low powered laser so the dot is very small, but this would make finding centre pretty simple. I’d then simply have to set Z0 and It’d be good to go.

If it was battery powered, I’d be be able to spin it (slowly) and any error would be easily corrected…

Here is the one I use on my CNC router mounted in the spindle. It come with a polarizing attachment so you can change the laser’s spot size. It’s pricey, but quality made.

I looked at lasers that would fit in the collet at first but I really did not want to be inserting the laser and replacing it with the bit all the time. So I think just having the laser permanently mounted at a know X/Y offset is easier. Just align the laser, then move the spindle the required offset and the tip of the bit will be accurately positioned. I plan to create a macro in UGS to move the offset so it should be very fast to use.

Very true, but I am not sure how to make the spindle move in a search pattern till it triggers the photodetector.

My laser guide arrived today and I got it installed. 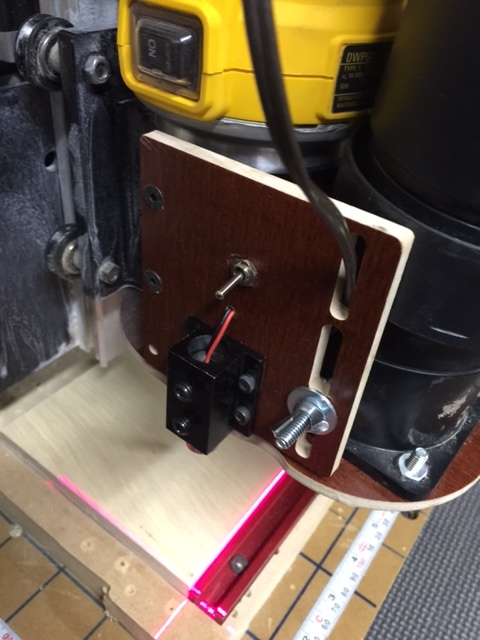