I’ve few doubts about about the mirror alignment and laser focusing. The reason why I’m asking this is that , the edges of my cut piece are not square. After searching through lots of forums I found that if laser do not hit the exact centre of the lens, result will be beveled cuts. Some posts says that beam should hit all the mirrors at the exact centre, and some other says It should be on the centre of 3rd mirror other wise beam would be slanted.

I’m not using a factory made machine, Mine is a modified X carve and It’s placed inside a home made casing.

I’m really confused about this. Should the beam strike all the mirrors at the dead centre or it doesn’t matter as long as the beam strikes same spot at every position (inside mirror not exact centre). It must be important for the 3rd mirror but what about others. Most post I’ve read have fixed 3 rd mirror but mine is adjustable one(3 screws).

can I use the screws on 3rd mirror to make the beam strike exact centre of lens even if it doesn’t strike the centre of 3rd mirror.

In a perfect world, you would like for the laser beam to be perpendicular to the work surface and follow the shortest path to get there.

This would give you the best edges and deliver the most power to the work surface.

In the real world you are going to have losses along the way. If the light path gets longer then you lose some power in the beam. Whether the loss is significant or not is a different question.

To get the best performance you would like the laser beam to enter the lens perpendicular to the lens and in the exact center (this is for a simple lens - compound lenses are different). However you manipulate the laser beam prior to entering the lens to get it perpendicular and at the center of the lens will just result in loss of power. Again, it may or may not be a significant loss.

The beam is actually an hourglass configuration with the focal point at the narrowest point. If you are above or below the focal point, you will have a bevel effect.

This is my conclusion,

Correct me if I’m wrong , Please…

My comments are for the general case, and applies to the characteristics of lasers and optics.

Since I don’t know the geometry of your mirror/lens system, nor the types of adjustment your system uses (move mirror back and forth, or rotate mirror, etc.) I can’t really comment helpfully on how to adjust your system.

I’ll try to explain what I mean by some pictures 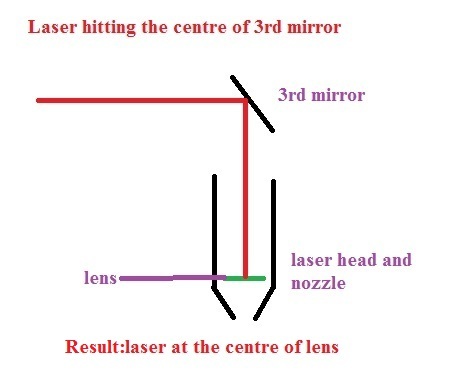 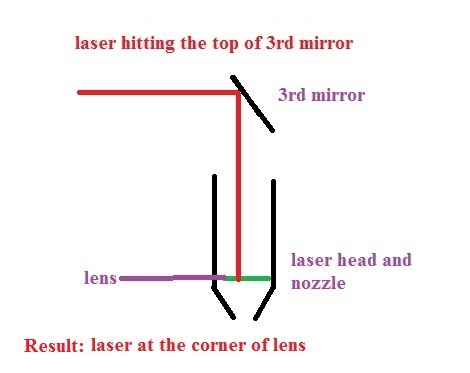 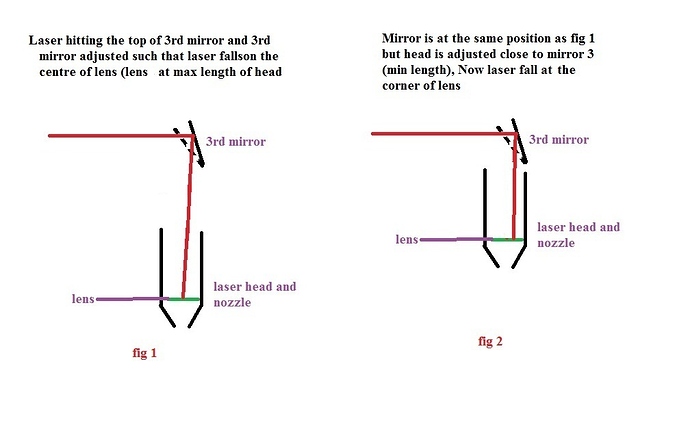 correct me if I’m wrong?

@Athul First, as your image shows in Fig 1 you will be entering the lens at an angle. The lens cannot compensate for angles. Normally the “3rd” mirror as you are calling it is normally fixed and that is the end point of adjusting the mirror system.
The document I linked to has all this information. If you are still not understanding the principle of the mirror adjustment I would recommend asking your question in the Google+ group K40 LASER CUTTING ENGRAVING https://plus.google.com/communities/118113483589382049502
There are a great number of people who have been working with this type of laser for years and might be able to put it in terms you understand.

The lens cannot compensate for angles

What does that mean and what will happen if beam enters the lens with an angle, wouldn’t it be focused to the focal point? 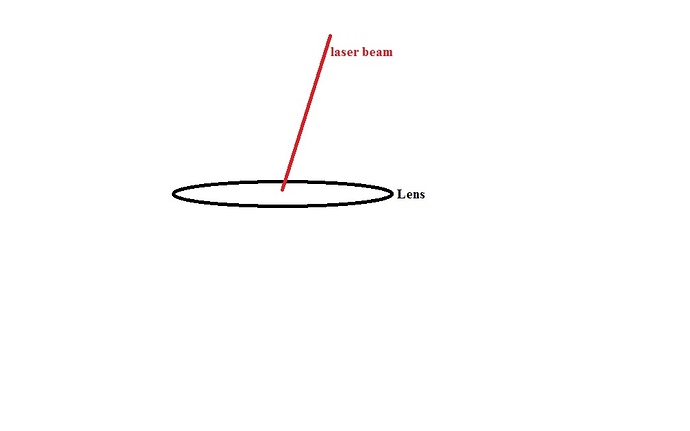 If the beam is entering the lens at an angle, the lens will not correct the beam path. Yes it will be some semblance of a beam but not optimal.

A quick look around the web I found two articles on laser beam lens principles. First one is very basic and the second ones goes very in depth. I hope this helps you with your issues.