I’ve got my laser setup working fairly well, except for this one issue.

On my project I’m etching onto birch plywood using LaserEtch, however the edges of the etched area have a much darker marking than inside fills. It seems to be because of the laser slowing down to turn on, and leaving a darker marking behind. It’s on the horizontal plane, which I’m etching with… (Image below - not blurred at all, that’s how it actually looks)

I’ll use the 45 degree motion for now so it evens out, but hopefully someone on here knows a way to fix it? Right now it makes the knockout words harder to read. 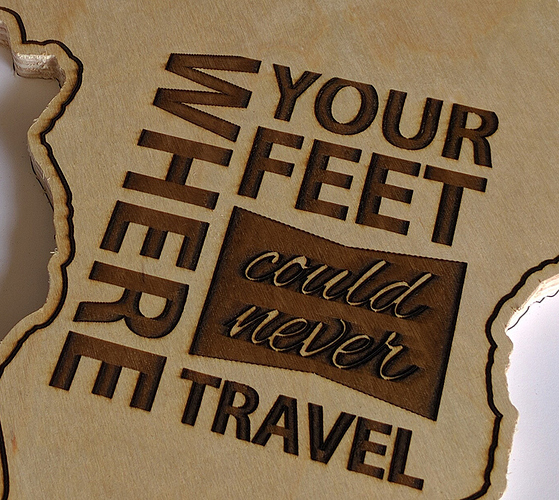 I’d actually be more curious why a big snip of the text is missing from the top of the picture! That looks pretty cool so far.

Haha. I’ll post a pic of the finished print when I get home.

I’ll start on a diagonal etch today too to see how that looks.

Sounds like a plan to me! Adding laser capability really takes it up another notch, doesn’t it?

Does your machine actually move 1,000 ipm? I’m guessing it probably doesn’t do so reliably. Or does that setting mean something other than linear motion?

You might try fiddling with you junction deviation setting when using the laser. That will adjust how much it slows down for turns.

Other controllers, like the Smoothieboard, will automatically reduce the laser power proportionally to velocity so you don’t get that kind of variability.

You might be able to find a post processor that will do that for you if you can provide it with your machine settings. Can you share your g-code for this project?

Were you able to figure this out? We are having the same issue.

Does laser etch have the option to run on a 45 degree angle? We do not see this option in the settings.

I haven’t yet, busy with other obligations. My poor CNC hasn’t gotten any use. I thought 45 degrees was possible, but I think it was a different software I was thinking of.

My next option to try is installing the JTech GRBL 0.9g, and tweaking the settings to make it work. (they are here on the forums somewhere). Then I will try the PicLaser software, as that has the different angle settings.

I just don’t know when I will have the time to try that.