Let's brainstorm together to find solution

Very timely post. My limit switch came unglued Saturday and I ruined 2 switches trying to glue them back on.

The glue ran down and glued the little swicthie thingie. I didn’t learn on the first one and did it twice. Not to mention I almost glued my fingers together.

Finally got one on but it doesn’t feel very secure. Gotta get some more switches.

I agree with you about the screws and tapping those tiny holes may prove difficult; though this was what I was contemplating. Will keep an eye on this thread and also see if I can come up with something (although as you can tell from my troubles with gluing, I may not be too bright)

I racked my brain trying to figure out this same thing.

I think the issue with it on the side is that your spindle mount has to be wide enough to trigger it or you have to add something for a trigger.

The linear Z that we both have has an inset on the front so it makes it difficult to mount there and be semi-compatible with other Z axis.

I’d be worried with a clamp that it would come loose during carving or that the switch would slide out. Maybe if you add a 2mm “dowel” to the clamp so that it fits into the switch mounting hole to better secure the switch. Those switches are small and I’d be worried you couldn’t get enough clamping force to keep it secure.

I ended up drilling and tapping 2 M3 holes on the front inset and screwing in the switch. The switches from Amazon allow for a 3mm hole to be drilled in them and not affect the switch operation. On the front, if the spindle mount didn’t go up enough, I was going to drill and tap a hole for a threaded rod/bolt to go in and give the necessary vertical adjustment. 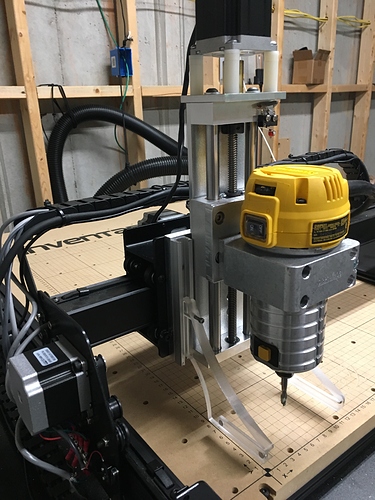 I quickly came up with this. (Crude drawing and not to scale) The 2 hole side would go on the back of the back plate where I already have the support you (Phil) came up with screwed on. The switch would go where you have it in your design being held by a screw. Probably another pc. of aluminum or sheet metal between the screw and switch. also might have to bend the piece that triggers the switch some so it triggers before z runs out of travel. 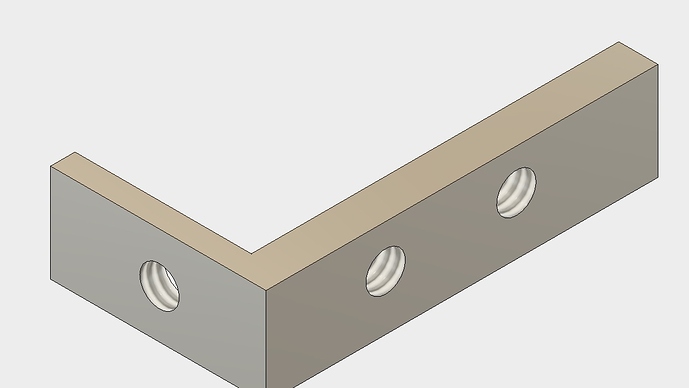 Not real sure I explained that correctly or not but thought I"d throw an idea out there.

That’s exactly where I have mine.

And it’s probably better to use a gel type glue

I would think you want the switch in a shallow pocket. So it stays straight. maybe a small roll pins too to lock it this way you don’t need to pinch it so hard.

Straight isn’t a major concern. Stability is more of a concern. These switches aren’t about absolute accuracy (you don’t need it). They are all about being in the same place every time. This system needs good relative accuracy but not absolute accuracy considering the reference point is adjustable.

The purpose of home switches is to have a reliable and repeatable known location, wherever that may be. Even the X and Y are set based on a ballpark position and not an absolute.

you should rezero your bit every time.

Except when you shouldn’t. Like when you are trying to restart a failed carve.

I’m looking for a solution that avoids using the tiny screws.

then how about a solution that uses post that the switch inserts onto and a catch that snaps it into place. you know it would not take much force to stabilize the switch and it would be easy to replace.

Not good with 3D design but I believe that someone that is could make the design easy enough.

Chances are, if it failed, the z could be off.

Not a problem. You re-home the machine. G54 is still good. You’re right back where you started.

Not sure how that can happen if your homing is consistent. Do you use G92?

Under normal circumstances, this is true. Unless you use G92, your Z should be persistent.

I can think of a few exceptions:

.5" is hard to imagine though. It would make me suspicious of lost steps.

EDIT:
Which reminded me of this.

[SOLVED] Z shifting after 1000s of moves on X-Controller Troubleshooting

I tried cutting 4 simple circular pockets and used jscut's ramping feature (i.e. instead of straight plunging, it ramps into the required Z - or creates helical movements in my case of circular pockets, to optimize tool life). The outcome is ~9k lines of gcode, half of which involve Z moves. In the end of running the gcode, I noticed that it went back to the given safe height of 3mm (Z WPos showing indeed 3), but it was actually about twice higher. H…


This was a very weird situation. I once experimented with 2:1 gearing and 1:1 ustepping on the Z (as opposed to 1:1 gearing and 1:2 ustepping) and experienced consistently lost steps that were consistently affected based on acceleration and junction deviation values.
1 Like
LarryM August 2, 2017, 11:56am #26

Yes I use G92 in my probe macro

That’s the problem. G92 is not persistent, when you hit the abort button it’s gone. You could modify your macro to use G10 and that would be persistent across an abort or soft reset or power cycle.

You would change the Z0 value to what your touch plate thickness is. Just off the top of my head I don’t remember if it is positive or negative.

Also G90/G91 is modal. All intermediate G91’s are redundant. You can get rid of them to make your macro a bit shorter.

G17 and G20 are also modal, you can keep them in your header, no need to repeat.

Maybe a PEM-style press-fit stud would be preferable to welding in a screw.

Well I was going to suggest 3M double stick (foam) tape. The industrial stuff is great.

Otherwise, tap the side and put a cap head screw and mount the switch on the back… 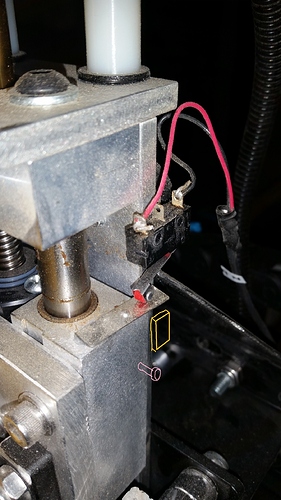 Embed a neodinium magnet in the z axis , then make a bracket that hold the switch with another magnet that way if there is a crash it will just knock it off …