Currently building my first x-carve and recently read some folks not caring for the limit switches, that they are too weak and break easily so they are opting to go without.

So my question is should I consider not using them and if not how do I make the machine know where to stop? Is it coded on the boards or just limited within the gcode?

they are too weak and break easily

If you smash something it will break. If used properly they function well.

not using them and if not how do I make the machine know where to stop?

The homing/limit switches are added functionality for the X-carve. If you use them properly they can make your job easier. It takes a small learning curve to know how to use them effectively and if used for homing and you use soft limits you will not break them in normal machine operation (and your machine will know when to stop).

Almost everyone breaks Z switch once. Because those are Home switch not Limit.
Back in time I come up with basic idea to protect Z Home switch you may try.

Also another one (Better Design) from another member.

Just wanted to share some photos of how I protected my limit switches. On the Z axis, I relocated the switch to the left side. I drilled a hole on the Z plate up through the makerslide slot. This allows the wires to be concealed in the slot on the makerslide. (The switch does not have to be relocated to the left side, I just chose to do this.) [image] In the photo above, my Z axis is all of the way up. Behind the limit switch you can see a bolt. This bolt will be explained later. But as y…

I had my XCarve for a few weeks before I got around to installing them, but now I can’t imagine NOT using them. Order extras though, because if you use UGS you will smash them. Guaranteed.

Thanks for the tips guys. I appreciate the feedback and suggestions.

I use DevCAD and DevWING for machining model airplane parts, before making the toolpaths I need to specify the size of my workspace and where the reference of my z axis is, at wasteboard level or at the top surface of the material I want to cut. As long as I put my machine in the right starting point it will never hit one of the end switches.

Crashing into the end switches occurs when I use UGS and forget to switch to mm (instead of inches) and give manual feeds. Or when I forget to set the zero position before starting a new job. (GRBL v0.8)

For X and Y axis I aligned the switches in such a way that they cannot break, first they switch, then the wheels hit the end/gantry plate before the switch itself breaks which cannot occur.

The high Z axis is never reached, the lower needs to be lower than the tool to function.

For safety and homing reasons you need switches. Sadly the GRBL developers decided to swap the pinout for the Z limit switch between version v0.8 and v0.9 as my hardware cannot cope with this change I decided to stick with v0.8

It would be nice to have the machine be able to “self probe” to know where it is at, but I can’t see how that helps with actual carving. I can’t see how the homing switches are accurate to 0.001 inch so you can’t use that to reset on an intricate carve. The switches also don’t help with work position so you still have to go through the zeroing process when you change bits or work pieces. Finally, since the switches aren’t limit switches, they don’t keep the machine from running into the ends of the machine (unless you do something like Brian refers to above, which I had previously missed).

I’m sure having the switches functional would be nice… but you can certainly run the machine w/o them if you so choose.

You will never smash them in any program with one of these, it uses hard limits not soft limits so it’s always active.

Both rely on software and machine integrity, which means if your system is broken then neither method will help you.

Soft limits stop the problem before it happens, hard limits just reduce the damage when the problem happens.

Finally, since the switches aren’t limit switches, they don’t keep the machine from running into the ends of the machine (unless you do something like Brian refers to above, which I had previously missed).

I would not want to operate without mine. My Z-axis switch crashed because a wire broke but other than that I’ve been using them for almost a year without a problem (still have my original X-Y switches). I’ve had numerous occasions where UGS crashed and I needed to get back to the exact X-Y-Z work position. The homing switches saved my bacon. I’ve got a new computer and use the UGS nightly build so I don’t have crashes as often but it saves a carve when I do. If you are doing a 3D carve it is particularly important to get back to the same position.

You will never smash them in any program with one of these, it uses hard limits not soft limits so it’s always active.

And to whoever flagged the post, you should let the guy see the info so he can decide on his own and make a board if he wishes, I have always offered the schematics to the community for free from day one and thanks to the thread many have received the info.

Correct me if i’m wrong but soft limits only start working once you home your machine and the machine knows where it is, so if you forget to home your machine, which takes away human error.

You are correct that soft limits require homing for them to work, but if you have homing enabled, grbl takes care of the human error by locking the system until the homing cycle is run. If you override the lock then you take responsibility for soft limits not working.

But without a filter the hard limits will not work, the alarm will sound immediately from noise (although it’s been said rewiring your machine with shielded cable works, haven’t personally tried).

But without a filter the hard limits will not work, the alarm will sound immediately from noise

The normally closed configuration is much less susceptible to noise (but it can happen).

Just as a side note, I’m running with normally open switches, shielded wire and no filters, without any issues.

PhilJohnson and LarryM,
I’m not trying to be argumentative, but really wondering how soft limits and homing switches would help in many of my crash situations, as well as how does it help re-start a carve.

Take my recently completed DiReista stool for instance… Sat the carve up, watched it cut out the first piece and since everything was looking fine, and the carve was going to take another 2+ hours, I left the shop to take care of other responsibilities. Somewhere in cutting out the arcs to be glued together for the foot rest, the pieces started coming loose from the carve and the router pulled them up and tossed them, apparently blocking the wheels and router travel. This caused the router to miss steps and the router ended up about 6" ‘north east’ of where it the xCarve thought it was. It then dutifully carved the rest of the arcs right on top of the legs. If the X axis was then sent close to the right limit, the router would get there before the soft limits thought they should be there (i.e. the code was correct), but the axis would still slam into the left edge of the rail. If there was a switch there, the movement would smash the switch. Hard Limit switches like BrianSaban uses would cause the motion to stop and the carve to be aborted, but depending on the travel speed, still may result in a smashed switch before the movement stops.

Now, how to restart a carve? When you power up the arduino, GRBL has no idea what the current machine position is. My understanding is that homing switches allow GRBL to find (typically) the front, right, top of the machine travel. So, the first thing required would be to open UGS and home the machine using the $H button. (I’m sure you could type a similar command into a terminal window, etc.) Now GRBL knows where the machine is at with respect to the machine, but it has no idea where the workspace is located, nor does it have any idea how far the bit extends. I currently use a 1/4" thick touch probe and a set of macros graciously provided in another thread to set the work piece zero in 3 separate measurements. Typically, I use the lower left of the workpiece and index off of the top. (For through cuts, I need to start indexing from the bottom to keep the spoil board in better shape). Assuming the lower left edge of the workpiece hasn’t been mutilated, I could restart a cut and probably be within a couple thousands, depending on how steady I hold the plate. It seems I would have to do this same thing, with or without the homing switches.

I really would appreciate an explanation of what I am missing in these 2 specific cases, as a solution to these specific scenarios would be most useful to me.

V[quote=“RickSchmalzried, post:27, topic:25426, full:true”]
PhilJohnson and LarryM,
I’m not trying to be argumentative, but really wondering how soft limits and homing switches would help in many of my crash situations, as well as how does it help re-start a carve.

In scenario 1 if the machine misses steps then obviously it doesn’t know where it’s at. Not much you can do about that. I havent had that happen in a while since I have gotten more experience as to feeds and speeds with the materials I typically use.

As to the second scenario, GRBL remembers the work XYZ. If I have to restart I just home and tell UGS to return to zero and I restart the carve with no adjustments to the XYZ or workpiece. It works for sure. My old computer with an earlier version of UGS crashed about 25% of the time. I rarely have software crashes any more though. Usually if I have to restart its because I’m using a smaller bit and it breaks. 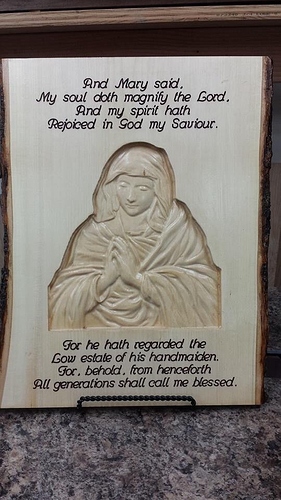 Here is an example. I had a bit break during this carve. Restarted, homed, retained XY, reset Z (because I had to change bits), restarted carve. Betcha can’t tell where it stopped.