were can I find the talked about linear rail z axis? can some one point me in the right conection thanks eddie

i am doing the upgrade as we speak.

When it is done, there will be a post about it on my blog. Probably tomorrow because stores are closed right now and I need some M6 screws. 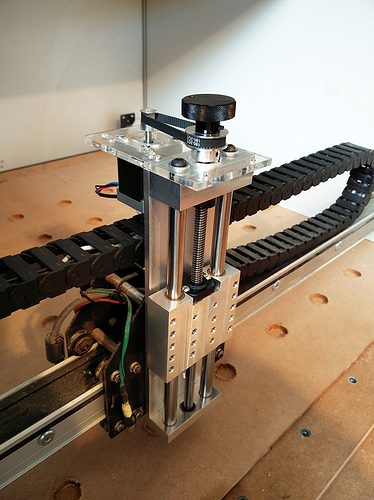 I see you have different sized pulleys on there, what will this do to your steps per inch?
Does the larger pulley on the screw come with the linear axis?
did you need to source a different size belt for it?

I know, a bunch of questions right out of the gate, but I have been considering this upgrade for quite some time.
As for the pulley and belt setup, I may opt to just mount the motor on top of the rail and call it good.

Someone said I should take a fast travel one, so i did. I think mine is a quality one, There are lots that look like it, but are worse quality, even visible from the picture.

It comes with a smaller aluminium top plate instead of my plexi one. The original one has 4 holes for a nema 23 and even comes with the spacers and screws. And a coupling piece for the motor shaft-to-leadscrew connection. No pulleys. But if you mount on top, it is a pretty complete set.

Personally I wanted to use a belt because I find it prettier. Also because of weight distribution, although it probably only has a marginal effect. I’ll remake the top plate in alu, so it will double as heatsink, which I wouldn’t have mounting the motor on top with the spacers. And lastly because I am still working with nema 17s (23s in the mail…) so I needed to make a custom plate anyway with the correct hole spacing.

The acme rod doesn’t have a reduced diameter towards the top (as the one from improbable construct has), so you’ll need a 3/8" coupler or pulley. I had that large pulley lying around (i think also a leftover from the improbable construct kit) and enlarged the hole to 3/8" on my drill press. All my other spare pulleys were too small in diameter to accept a hole this size, so that is the reason I used that large one.

The Z settings I’ll have to calculate I guess, shouldn’t be too hard…

The belt is also a spare part I already had. Bought a 10 set probably a year ago on eBay for next to nothing.

I did re-tap most holes since I use metric. And the mounting holes don’t line up with the xcarve carriage plate holes obviously. But I’ll write that down tomorrow on my blog if you want the details.

Haven’t used it to carve, but it feels very sturdy and runs much smoother than all my previous setups.

I just bought the very same linear rail, showed up Friday afternoon and it’s sitting on my bench right now…

I won’t have time to install until next weekend at the earliest, but I planned to use a coupler and the provided spacers and mount the Nema directly on top, I’m not a fan of the belt \ pulley since that’s another plate, pulleys, belt and tension concerns.

I can’t use a knob for the Z with the Nema mounted directly, but if that were a real concern I could get the Nema 23 with the thru-shaft…

I’ll post some updates as I get mine installed, but I suspect you’ll beat me to it…

Originally, I was going to start using my Shapeoko again for other projects after having completed the last batch of upgrades. But for some reason I got it in my head to order some more parts and k…

I went witht this z axis as well. In hindsight I could have gotten the 4.75" unit instead of the 5.75 but this may prove beneficial in the long run if I upgrade to a dewalt or bosch later on.

Currently working on an adapter plate for the quiet cut spindle mount.

With the nema 23 mounted on top, other than reversing the motor rotation, ar there any changes needed besides calibration in regards to the lead screw?