Well, finding the injector is possible, though finding the easiest solution is somewhat the issue. Adding a picture here of the best known option. It’s used in food industry dispensing, but it essentially is just an adhesive injector that they moved to the food industry.

Air pressure from a compressor forces a grommet down, and when the dispenser activates, that air stops and product is pushed (also with pressure) through the dispenser. After a certain amount of dispensing time, usually a second or so, the pressure on the top grommet resumes, is pushed down, and immediately blocks the feed tube again. It’s a pretty simple dispenser and sits in a heated mount, fed with a heated product line. The software that controls it though is confusing, and since I do not have one just yet, I have not been able to examine too closely. It’s from Shenzhen and it’s not controlled through a computer, but rather a remote display, which looks… old and difficult. Which is why integration with the software controlling the x-carve is my largest concern. I am currently looking for alternatives to this now for software reasons.

Essentially I want to mount something like this, (though hopefully with friendlier software) to the x-carve and use it to move around the deck while the dispenser does it’s thing at each mold site. 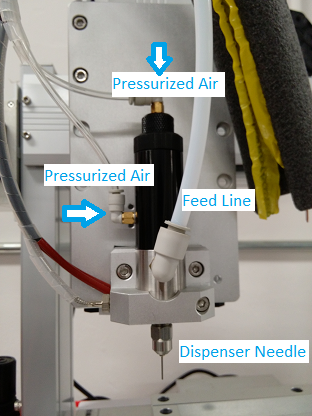 It’s from Shenzhen and it’s not controlled through a computer, but rather a remote display, which looks… old and difficult. Which is why integration with the software controlling the x-carve is my largest concern.

If you can figure out how to control the injection system using something vaguely like an arduino, then it’d be really easy to integrate it into the XCarve. I think you’ve got more of an electronics project to start with than a software one.

One plus that you may not have thought of is that the XCarve is simple to extend in the Y direction, so you may be able to get more throughput than you were expecting. It’s easy [well, from reading about it, haven’t tried it myself] to support longer Y rails; it’s much harder to get more X and Z.

I know virtually zero about the kitchen startup space, but kitchentowncentral looked interesting. They may have some feedback on equipment possibilities.

Maybe you could adapt a part like this to accommodate the injection?

Just not sure how it would handle the viscosity you are using though. The Pancakebot achieved this, albeit on a smaller scale, however, they use vacuum and pressure to control flow. They even developed software to drive their system. Might be worth downloading and peeking at the advanced settings to see what parameters they are trying to control.

So, in theory, this is possible.

Where are you Located

I still say from a business standpoint your efforts and time would be better spent finding out sourcing or used equipment. You’d have money tied up in this for months before ever actually doing anything that you’re not sure it can do anyway.

I think this very much depends on the kind of startup they are. There’s a big difference between funding a candy-disrupting startup that’s using interesting tech in new ways (something I can see getting angel money for), and a new candy company that just outsources the kitchen. The second one probably follows your advice; the first one is in a whole different world.

my whole point, it isn’t new. This candy depositors already exists and have for a very long time. to each their own. You can do it right the first time or just do it many many times over

You’re 100% right if they’re running what most sensible people think of as a business. Having spent my career in software, though…

We create fine chocolates using a flavor palate determined by our AI to be the best match for your mood and the mood of your chosen communities. We leverage the apis and off-the-shelf hardware coming out of the maker revolution to drive the cost of candy creation down to the point where we can put profitable micro-scale candy creation right next to the point of consumption. That enables on-demand real-time delivery using services like Uber and Amazon Prime delivery to bring customized high quality chocolates to businesses and consumers within 4 hours of placing their order. Our ability to create profitable micro production facilities driven by our proprietary AI systems is protectable IP and a huge barrier to entry for other potential players in this space.

I’m not saying I’d invest in that, but it’s not as crazy as some other pitches I’ve heard, and I suspect that existing commercial equipment is geared towards very different environments.

And never underestimate the willingness of people in tech to try something different. Very occasionally they’re right. Even when you’re wrong, acquihire deals these days might still make it worth doing. Just make sure you throw in some AI. (Really, not joking about the AI part.)

@JamesMoore is essentially correct in his identification of our company goals. While there is more obvious and ubiquitously used instrumentation out there for the industry that is known, they come with their own problems in the form of poor flexibility, unnecessarily high cost, and little opportunity for creativity. We’re not on a crusade for total market disruption or anything like that, but we’re a small startup with small startup changes to the model. This is one outlet of that that we are trying to explore. It would be easier to go to the large scale makers and simply re-use the same equipment that’s been used in the last few decades, but we feel that is non-unique and limiting to our goals. I definitely like the discussion here and appreciate the thought going in to it, but adapting new tech is something that we think is both fun for us as makers and that may bring other advantages with it.

On some of the other topics:
@MichaelColey I’ve used peristaltic pumps before and they don’t have quite the oomph we are hoping for in terms of a single, quick injection. That’s why we’re planning on using air compression. That’s definitely along the right lines in terms of simplicity and I’ll check out the website more, many thanks for the reference.

@JamesMoore, I think you are right in that now my problem is finding the appropriate hardware. Arduino control would be great, I’ve dabbled in that a little bit and it looks like if it works with Arduino, it could probably work with the x-carve, so that’s my next task. That, or I see if I can get the suppliers of this injector to tell me if it would work with arduino software or gcode.

So essentially I’m on the hunt for an injector and looking to brainstorm ideas. If anyone has any experience or ideas I’d be happy to hear them. As always, thank you all for the support and discussion!