A wood-turner friend of mine asked if I could cut a Longworth Chuck on my X-Carve. The files are available here: Longworth Chucks are quite handy for woodturners - they make cleaning up and sanding the bottom of your bowls very easy.

The only problem is that the files are in .CRV and .DWG and .TAP formats. I cannot import them into Inkscape or Easel. Does anyone have V-Carve to convert the .CRV file? I’m looking for the 12" version.

Just delete the extension to leave the .Svg

Thanks @Earwigger. Looks like that file has some strange artifacts in it. When I imported into Easel, a couple of the spiral sections appear to be “squished”. However, the file looks perfect in Inkscape. 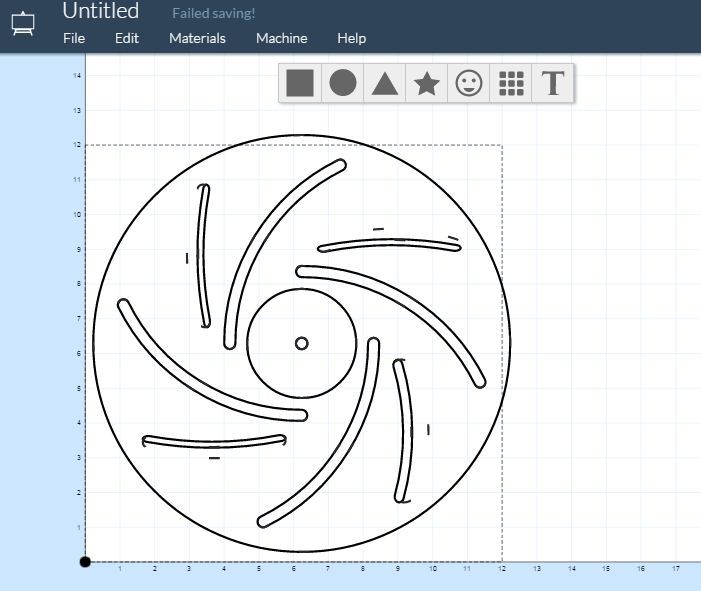 The .DWG file was a little wonky, but here is the 10 inch version:

Here’s the file that @JeffParish sent me. Imported into Easel without issue. There is still something strange with the model (e.g. fills are wonky), however it looks like it will cut OK.

I made a longworth chuck and here are the two files in Easel that I use.

They should be public now… and no they are not identical. The back plate has a recess for attaching a faceplate and the front plate has some finger holes that help with tightening the longworth chuck.

Yes, there is a million different ways to do it. I was just sharing the easel files that I used to make mine. .I wasn’t trying to debate all the possible ways that a longworth chuck can be made.

I didn’t draw them up but just modified a file I found online in Inkscape and then imported it into easel.

I just used this file. worked great. Thank you.

bless you, Earwigger! I’ve been wanting a longworth chuck and have been unwilling to pay the high price for one. I recently bought a glowforge laser cutter and thought I’d just look and see if by some miracle anyone had made a SVG for a longworth chuck, and there it was! It worked perfect in inkscape and then i was able to easily bring it into my glowforge software and it worked beautifully. Thanks so much for sharing!!

@GreggLind, are you looking to just increase the outside diameter to 13 inches?

Try that and see if that works for you.

Could not open this file

That is a bummer because i deleted it after i copied it.

It would be great if we could get all these file converted to work in easel form the CRV format. I did a 12 inch one for a friend and now he wants a 13 inch one and when I tried to make if bigger I just grabbed and then realized it made the objects and everything wider… So not sure how to scale the 12 inch one… to 13 inches

Longworth Chucks are quite handy for woodturners - they make cleaning up and sanding the bottom of your bowls very easy.