Hi All, I’m looking to buy a Xcarve or Shapeoko 3 as I just received a grant to do so. I’ve seen many posts here regarding stiffening mods. Is this a must once I get the machine? I am looking at the 1000mm version. I have built 3D printers and understand the tweaky nature of such machines as I am constantly doing something to my printer, just wanted to check so I know what to expect if I purchase the Xcarve.

If you purchase version 2.0, it has the upgrades.

so they just came out with a new version of the x-carve and I would defiantly give Inventables a call to see exactly when it is going to be ready for purchase or the lead times go down a bit.

and it really depends on what you plan to do with your x-carve. this will determine the maintenance schedule that you will have to put yourself on. Even my big 4x8 machine requires regular maintenance to keep it running like a top. the V-wheels do require some checking but if you really pay attention to your assemble and calibration when you first build it it will ease future problems

The only real upgrade I can think of to the newer version is that you may want to make some braces for the Y axes. It will be easy to do with the machine and shouldn’t take any disassembly. I made some out of 1/8" aluminum, and they work just fine: Y Axis Braces and Belt Dust Shield

Other than that, it looks like the new version has the rest of the upgrades covered. They were never “recommended” upgrades, they were just “suggested” since they increased the machine’s ability to cut faster. An unmodified original X-Carve could still make the same projects, it would just take a while longer because the cuts had to be made slower and shallower to minimize flex.

Thanks Guys,I had been leaning towards a Shapeoko 3 but I really think Xcarve will be the one I order. I’m sure I will be back on here asking questions and attempting to contribute to the forum when mine arrives. 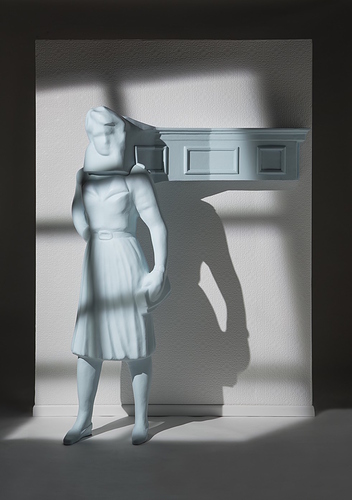 Hi Guys, I’m also wondering if you could answer a few more quick questions. I’ve been cutting life size figures on a large 5x10 CNC machine for the past few years. I have attached an image of what the final piece looks like after fiberglass. The other image shows the slices of the figure. I would usually slice the figure into two inch sections since that is the thickness of the styrofoam. Can the XCARVE handle something like this? I’m wondering if it would have any problem getting the detail you see in the dress? This was done with 2 passes because of the depth. I used the same bit for each pass and changed my stepover. 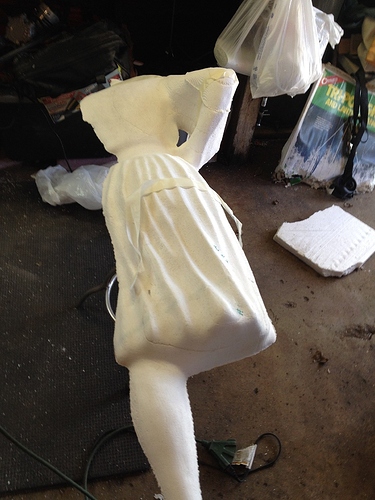 Interesting build! As long as there’s no underhangs, you should be able to cut slices like that.

The only real issues I see are that the slice is longer than normal and may be higher than the X-Carve can handle, but if you can cut multiple slices and sections that the machine can physically handle you should be golden. If you’re gluing them together and putting fiberglass over, then you should be good to go.

Thanks, does anyone know where to get mount for the Makita router? I have messaged the person who posted the thread on custom Makita mounts but have heard nothing. Wondering if folks could suggest another custom mount as I would like to go with the Makita over the Dewalt.

I was wondering the same thing. I am in fact still debating on which machine to buy…the X Carve or the Shapeoko 3. I have played with both easel and carbide and I really am liking easel. Having said that, the Shapeoko 3 looks to be a better machine (although I’m not sure about this being the case still with the recent updates.)

I feel like the community at Inventables seems more robust. I know both companies have been pushing updates to their hardware as of late (October 2016) with Shapeoko making improvements to the z axis plate and the X Carve making updates to their controller box, making a more rigid gantry and various other things such as a Z-Probe, and better hardware. These were all considerations of mine in my purchase. At this point in the game I am even more confused in the matter with both companies making pretty amazing upgrades.

I am new to CNC’s and am torn as to which direction to proceed. both from the machines themselves as well as the software. If I go with a shapeoko 3 can I still use Easel and export to Shapeoko. I have read that because the SO3 uses a direct belt drive for the Z-axis, while the X-carve uses a screw or Acme/trapezoidal rod exporting from Easel can mess up the SO3’s settings.

Or do i go X Carve due to the recent upgrades. Is it as robust now as the SO3?

Its kinda like buying a new car. There will always be a feature on one car that may or may not be on the other… at the end of day, what really sold me to buy X-Carve over any other machine. Four things.

At the end day, you are going to choose the machine that is best for you. I certainly did.

I struggled with the same questions… But I’ve ordered the Xcarve as I see the forum as a benefit and I know I will have many questions once the machine arrives. I am also into 3D printing and I purchased a Seemecnc Rostock Max v2 a few years ago,the forum has been endlessly helpful and it appears that this forum and community is just as strong. Can’t wait for it to get here!

For the Makita mount you want one which is ~65mm in diameter — these are available on eBay (I bought one and have begun drilling and tapping it for my machine but haven’t finished yet). Alternately, one can use a 69–70mm mount and an adapter ring — if you can get 2mm thick 70mm diameter aluminum tubing that seems to be perfect (I used a smaller Imperial dimension tubing which works okay, but has the mount bending more than I’d prefer). Carbide 3D has begun selling a machined adapter ring which looks quite nice.

Easel can be used w/ pretty much any CNC machine — one just has to get the G-code out of it / to the machine. If you use it to directly control a machine which differs from the Shapeoko 2 / X-Carve variants which it directly supports, after initial configuration / setup you will need to restore the correct defaults / # of steps per mm — this has to be done anyway by most people as part of calibrating the machine for belt stretch, or the specifics of their M8 threaded rod.