it seems like my machine is loosing steps on the X axis.
I started a test job:

Over a distance of about y=28 in inches, the next pass X was starting was about 0.01 inches off to the left.
The carving other wise looks straight.

EDIT: Just realized that its moving smoothly to X+ (to the right) but stuttering towards X- (to the left).
I bet that’s the cause for the issue but I am not sure why it would make a difference if its moves to the right or the left.
EDIT: its moving almost smoothly to X- now (still not as smooth as X+) but the issue is still there, and its again off 0.01.
It is also not slowly drifting off, but once one ‘pass’ is complete, it starts the new pass about 0.01 inches too much on the left. That seems consistent with each pass. 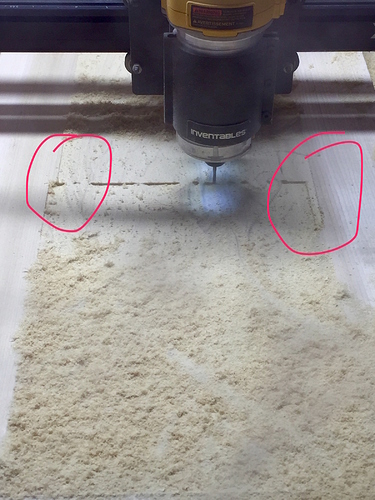 May need to up the current limit on X.

All tight and i upped the pot already to like 70% or so.

But i believe it has to do with the shaky X- movement, I just dont know why it is doing that only going left, never right.

In that case I would check the adjustment of the eccentric nuts on the X axis.

I just did loosen all eccentric nuts on X and Y axis, and re-tightened and aligned them.
I seem to have missed one washer on the Y axis on the right side, so i added that back when i put it back together.

Now it seems like the 2 sides of Y don’t get out of alignment anymore. The X Axis seems to stutter LESS on the way to the left, but its still not as smooth as moving to the right. It also sounds more like a ‘screaming’ noise when it moved the the left.

I run my test job again which should be done with one pass in about one hour, so then i know if this made any change…

EDIT: the job failed too…
EDIT: i found 2 setscrews, one on each Y axis pully was missing. I replaced them. Also straightened out the Y maker-rails, they were not 100% straight against the X axis.
I will have to test again tomorrow, hopefully it works now…

Just an update. the issue is not resolved, the carvings are still off unfortunately… Not sure what to try at this point anymore…

Try to move the X axis by hand with the 24 volt power supply turned off. Move it slowly and see if you feel any difference in the resistance when moving left or right. This might help determine if the problem is mechanical or electrical.

I tried that and it seems like i only get resistance in form of a grinding noise when i push it too fast. I get the same noise on the Y axises.

I also saw though that in general it seems like the Vwheels are loosing some of their substance. I attached pictures. The grey ‘dust specs’ come from the VWheels it seems. It can be found on the X and Y rails, and also in the ‘groove’ of the wheel itself. 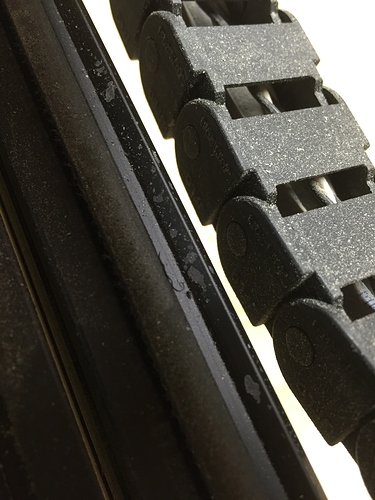 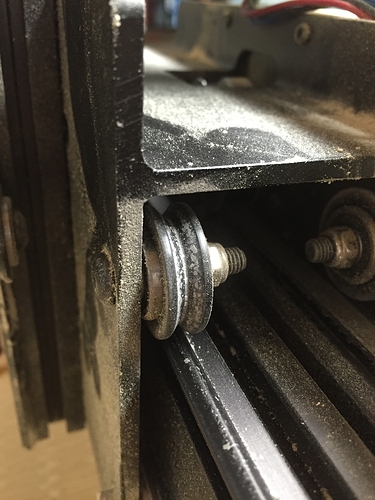 The Eccentric nuts dont seem to be too tight though. I also checked the belts and they are definetely not slipping, so i can rule that out. The rails are also square to each other, and the Y axis rails are paralell to each other as well.

Another thing i found out is that the left Y axis carriage is slightly closer to the bracket that attached to the wasteboard rail than the right side of the Y axis. If i manually move them to bring them back to be both equaly far away from the bracket, they are off again after a full move of the Y axis. Then they stay always the same though, like the distance does not change after that. Again, the Y axises are parallel to each other (i measured the distance between them on multiple spots) and they are also square to the X axis and the table. 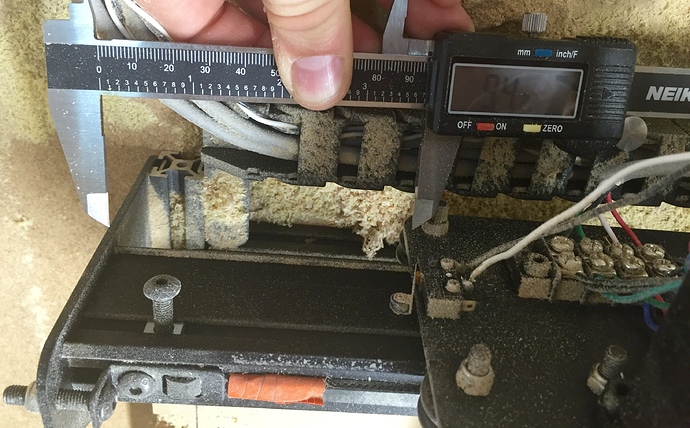 The V wheel in the picture looks like it is damaged. Are those pits in the surface of the V wheel, or bits of material stuck to the wheel?

I don’t think it should be that way.

The wheels are smooth and the rail is too but the wheels seem to leave the grey ‘debris’ on the rail, it seems to rub off or so

I guess the next thing I would try is to clean the V wheels and rails to remove all of the built up material then see what happens when you move the X and Y axis by hand.

See if any of the V wheels are not rolling, but dragging when you move the X and Y axis.

The debris is metal though it seems and not wood. I have only been cutting wood so far. I usually vacuum the machine after each run, I didn’t vacuum though when I took the photos but usually it’s clean.

I’ve noticed the same gray crud buildup as well, and have been cutting primarily MDF. I’ve got a stiff plastic bristle brush that I use to clean the wheels and can remove it from the rails with a paper towel, but it always comes back.

I set a new x y z 0 position, and marked the spot. Then i jogged the X and Y axis around for a minute or two, little steps (0.1) inches, long ones at 1 inch per step, and then hit the return to 0, and it always came back to the same spot.

I suspect it only shows up when im cutting, or after a long time cutting. Not sure how i can test that, i am getting frustrated with this.

The thing that throws me off is that while its cutting from the left to the right its all straight and fine, no skipped steps. But once the carriage goes from the top on the Y axis back to the bottom the Y to start the next pass, its instantly off a full 5 mm.

Any advise is welcome.

Which stepper motors do you have?

Are you comfortable working with a Volt meter in tight spots?

How do you have the wire for the router run? If it’s inside the drag chain, try taking it out and running it on the outside. It’s a stab in the dark, but maybe there’s interference from such high current draw similar to what happened with the regular 24V spindles. Also, if you used shielded wires for the steppers maybe you should try to ground them.

@LarryM I have the NEMA23 steppers, all my parts came with a fully spec’ed out 1000mm XCarve kit. Im not even comfortable running a Volt meter in large areas

@RobertA_Rieke I have the wire run as per instructions, in the drag chain. I am not sure if the Dewalt would cause the issues, i just did some more tests (i attached videos to each section):

-I did some air cuts, running the dewalt spindle on regular speed (and another one with spindle off), and positioning it on 0 0 0. Then i marked 0 again and ran the job that i ran the past days. I had it run for a few minutes, then cancelled the job and had it return to 0. It always made it back to the exact same spot.
Video1 Video2 Video3 Video 4 (The squeeking from time to time is when the Z axis moves up and down)

-I took a slow motion video from it moving from the farthest Y back to 0, and couldn’t see any steps being skipped:
Video

-I took a video here that shows you my belt setup, and the sound it makes when i move the carriage without powering the motors:
Video

-I also tuned the Pots according to the video that got posted here 2 days ago.

It will make multiple passes, and when the second pass starts, you can see the issue already because it will be off.

Here is what I have noticed. It appears that the sound that is not “smooth” only occurs when the router is moved up or down on the Z axis and that sound seems normal to me. Can you set up a file to move the X axis without moving the Z and see if you still get the noise?

Also, I don’t know if it’s because I am viewing the video over the internet or not, but it seems that your X axis V wheels are not rolling all of the time. I see some spots where it doesn’t roll, or the video is dropping frames. I tried to download the video to play in from my disk, but I wasn’t able to do that.

The sound that it makes when you are moving the Y axis by hand is normal. When you move the X axis by hand I do hear something that is a little off.

Do you know how to dump out the grbl parameters (using the $$ command)?

@LarryM Thanks for checking on the videos! Yeah the squeeky sound is only when the Z axis moves up and down, so that is normal.

I think Dropbox is mangling the video a little so its stuttering a little bit and dropping frames. I sat yesterday next to the machine for a long time watching the vwheels to see if they are all turning, and they are all turning at all times. I was hoping too it would be as easy as tightening a nut or so

And i have not dumped the parameters yet, but i can do that when i get back home if i know how to do that. Is it just issuing the $$ command via the command option in UGCS?