So I was following the instructions that Robert lays out and I noticed a strange turn of events I lose steps at the exact same spot every time. I don’t think it is the pots that are the problem. Any suggestions.

I would think if it was a broken wire it would happen more often.

I also checked the belt and there doesn’t look or feel like there is any damage.

Are you loosing actual steps (do the spindle start/stop at the same place) or is there just an audible change in sound?
The latter could be code specific.

Is it catching on something, perhaps a bolt head?

Are you loosing actual steps

Yeah if you look at the job below it you can see it has a staircase like finish. It was suppose to be a rectangle but it kept losing steps shortening the travel one way and then cutting further going the other.[quote=“StuartPearson, post:5, topic:36942, full:true”]
Is it catching on something, perhaps a bolt head?
[/quote]

Not that I can see, the only bolts in that area are those furniture bolts that slide into each other in the middle so they stay relatively flat to the surface.

In the video you are seeing a 24in line being cut I am not doing anything manually. I Followed the settings in this video as closely as I could.

And, here's the last video of mine this weekend. A guide to adjusting potentiometers, hopefully it's not too confusing.

So either it is binding when lifting Z-axis or it is slipping (pulley not seated properly/mechanical binding or a poor motor connection, check all 4 wires - if one is faulty the stepper will rotate but direction will be the one with least resistance)

I’m not sure where it would be binding I checked all the v-wheels they are all rotating fine. I checked the pulley it is secure, I couldn’t tighten it any more. I could understand a wire issue but it is operating fine the entire length of the cut, it is only stuttering for a second at that one location. I would thing if it was a loose connection it would be at random locations.

I would thing if it was a loose connection it would be at random locations.

I concur with that logic.
If something happen at the same place, it is “told” to do so, either mechanically (binding/drag) or electronically (code)
Can you repeat the hickup with a different carve file? Does it happen if you jog it past that position?

I will start a new file when I get home. I know for a fact during my step per mm it was travelling right pass that spot with no issue, however I was using UGS for that not Easel.

it was travelling right pass that spot with no issue

When you are able could you post a snippet (20-30lines or so) of your gcode?

I wasn’t using a particular file setting up my step per mm I was just manually telling it to go 300mm left or right and then verifying the actual movement distance.

Yeah i will be honest I feel like it might be a gcode/easel issue I am just not sure how that would have happen and how I would fix it. Is there a way to export my gcode from a easel project?

I don’t understand why there would be a break in the line. All I did was create a square make it cut on the line and that was 24in by .25 in. It should have been one continuous line basically the whole way and I think it had a small y movement at each end.

Here is the x axis test

This is the project I ran before the x axis test where I noticed I was getting the loss of step between passes. It caused a staircase like effect on the left hand side. It was the larger square on the right. You can see the result in the video. 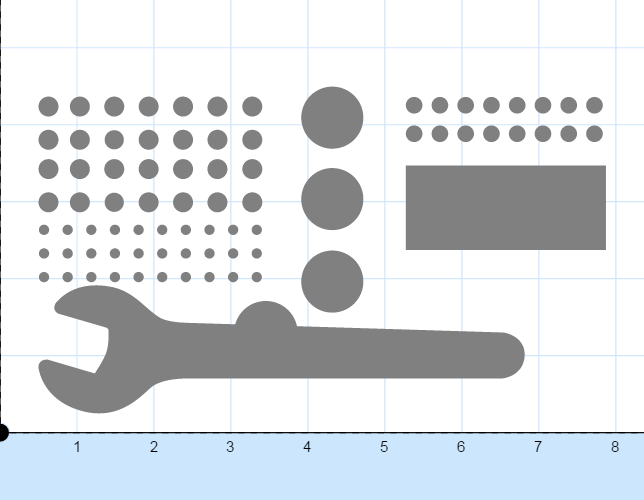 I am fairly confident it doesn’t stick up that far but I will check when I get home.

If you’re telling it to cut a line, it might be a slight deceleration to move the Y or Z. That’s what it sounds like to me. If you go to machine -> advanced and export the Gcode then post it here, it may show that.

Like Robert said try just doing jog commands. Or create a Gcode file that is truly just a straight line.

Here is the actual gcode file

Seems like that code contain Z-movements in the middle of the design, tab?

There’s always a place that the Z steps down. You could be hitting an acceleration limit of the machine which causes a slowdown and an audible pitch change. You can remove the Z axis movements in the Gcode if you want to test it out.