I just returned to my X-Carve after maybe a year long hiatus. Before operation, I cleaned up everything, tightened everything, checked everything out and all looks good. Did some test cuts in Easel with no issues. I jogged it around endlessly and all was smooth with no missed steps.

I loaded a gcode from Fusion 360 involving a few operations- a 2D contour and a pocket cut. When asked by Easel, I added the additional lines of code to the header. The 2D contour ran perfectly.
In between operations, before starting the pocket cut, the carriage inexplicably moved up the Y axis 13/16" and continued on with the cut as if nothing happened. The operation ran through without issue albeit everything was off the 13/16". After completion, it homed to a spot 13/16" above the starting point (as shown).

I tried the gcode again with the same, consistent result. Anyone know what is going on here? 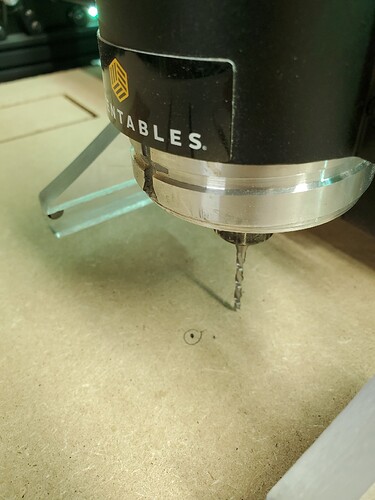 Sorry to ask, but seeking clarification, you re-ran the carve from where it stopped at, being highee up the y and it moved up another increment along the y?
Or you re-ran from the original placement and it moved up to the same stopping point as it did previously?

The first scenario is very odd, however the 2nd sounds like there may be a movement in the begining where the cnc crashes into the front of the y axis and looses that much steps…

Also, i believe if you used the Easel post processor provided by inventables than you shouldnt get a prompt asking about altering the initial lines of code.

I had the same exact result twice:

I actually had to download the most recent Easel post processor for Fusion shortly before attempting this carve.

Also, for what its worth, I thought it was crashing into the front also, but this isn’t the case.

I would try a smaller design that is not near the limits of the machine to prove that it isn’t hitting a physical stoppage at the front (or a front area clamp)
You could even run this AND the one that has already been failing In Air, with the Z zero set artificially high so as to not even touch the wood below.

OR if you like I can take a look at the F360 project how its setup, And if you could take a screenshot of the Machine Inspector page in easel after setting x,y zeros that would help confirm that it should or should not be crashing based on the origin location Plus the Y movement to confirm that the values indicate it shouldn’t be crashing…

This is an unlikely cause because both sides would need to have the exact same damage, but a possibility none the less, is Damaged belts with missing teeth.

@SethCNC 100 points for you. Finally got around to actually watching the carve and sure enough, my dust boot was colliding with my enclosure.