This is likely not the place for this except is is a new feature.
I have not been on the X Carve for a couple of weeks and tonight i fire it up and open machine inspector to send g28 command and there is this, switch States? Can someone please explain?
Thanks 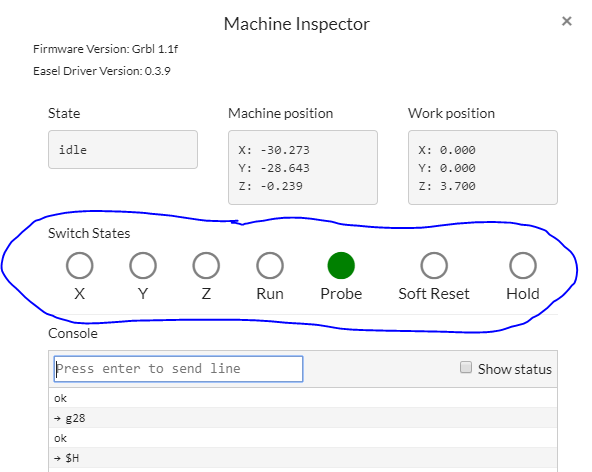 They indicate the current state of each switch. If you take your finger and press one of your homing switches down, you’ll see it turn green to indicate a closed state. The switches are only in use when homing the machine. G28 and G30 just recalls pre-set positions after homing, when the machine knows where it is.

Edit: (If you have homing switches on your machine, I mean)

Ok that makes sense but am puzzled why this is now in the UI and there was no announcement.
@Zach_Kaplan Some explanation from Inventables would be appreciated.
Thanks

Minor Easel changes don’t always warrant an official announcement. It’s like finding Easter eggs, surprise!! Some features warrant beta testing by the community. In a few previous cases, select individuals have been privately invited by the Inventables staff to test these features without general knowledge made to the public. When they feel it’s ready, they release those features to the public. Easel is a work-in-progress, it’ll keep changing I’m sure.

This particular feature doesn’t appear to be significant, so perhaps they eliminated any/all beta testing and just rolled it out. Again…surprise!!

I am curious as to what the purpose is. When would these indicators be of use?

I can’t speak to run, hold or soft reset with certainty; but X, Y and Z would be helpful if you were having issues with your homing sequence or jobs quitting early, and wanted to verify that the switches were working as they should. The probe one would allow you to test for proper response from the probe when you have it hooked up and touching the bit. Exactly the kind of thing that is perfect to have in the machine inspector interface, in other words. Hopefully someone else can elaborate further on the other 3. If I had to guess, I would think it was for testing the 3 buttons on the front of the X-Controller.

I will testy switches the next time.
Some explanation would be needed to make this useful.

@LeeWyatt I think you are right.

I just tried them on my machine, and this is what I found.
x, y and z light up, if the homing switches are pressed manually, but they do not light up during the homing sequence.
Probe- indicates contact with the probe
Run, Soft Reset, Hold- indicate that the buttons on the controller are being pressed(and it has to be held for a full second, not just push and release). They don’t indicate that the were pressed, the just light up while being pressed. Similar to the x, y and z.

So other than just physically testing that the switches are functioning, I don’t see the reason for the status indicators. I could understand if they stayed lit indicating that they had been activated. I would like to hear any ideas on how to make use of these.

My guess would be that they are exactly for what you guys just did. To confirm that your switches, probe and buttons work. That is all and that is good enough. Making sure your buttons function from the machine inspector gives you a troubleshooting technique to verify what works. If users submit help tickets to Inventables, the support team could would them through a few steps to verify these functions with a little feedback.

I completely agree. It’s a quick method for identifying if a problem is with components that are otherwise more involved or time-consuming to test. And a great addition.

Maybe @Ruwan can shed some light on this.

Does it really need much more info that has been deduced so far?

From a programming stand point it’s a small quick change that added benefit for trouble shooting or machine inspection. We should all be inspecting our machines routinely anyways and this makes it super easy to verify switches buttons and probe are working correctly.

I don’t feel small feature like this take away from the progress on bigger features either. As a programmer, I’ve learned it’s good to stop and focus on something else when stuck on a problem to clear your mind. That’s where a lot of small features in my work stem from.

So Run is play and hold is the pause and soft reset is cancel?

We just posted an update about this functionality in the “Updates” category: