I think your wife is a keeper!

The design of a DC is a pretty simple matter with the commercial units. I have a shop fox which is a grizzly with a different color paint for the most part. The HF stuff is a bit lower on the overall quality scale but time and again I see positive reviews of them. After all it really only does one thing…SUCK WIND.

I am not familiar with the menards units but most of these come from pretty much the same place, the C.H .Ina company.

It’s smooth on the inside, and also cheaper and lighter than pvc. Worked great for me.

Almost double the price and weight of the link I posted 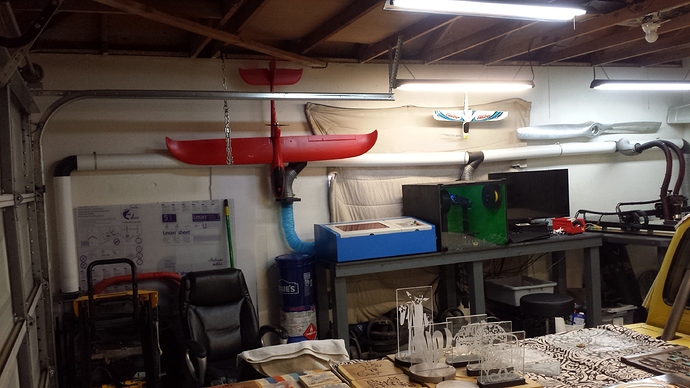 The pipe is slightly larger in inside diameter than standard dust collector fittings but I just make a bushing from a slice of pvc with a section cut out to fit between the pipe and blast gates.

I think the Dc manufacturers have this slightly odd size t deter folks like me from using standard fittings.

If I were to do it all over again, I would use 6" for the main trunk and reduce it closer to the machines.
But it works great the way it is!

It is easy to cut an adapter from .75 inch MDF.

But you would need some tool that is capable of making precise cuts in wood.

But you would need some tool that is capable of making precise cuts in wood.

That made me grin…

I guess if you are just starting out you can use a guide. But I would not let anyone know about it.

I cut a 1.5" slice from a piece of scrap 4" pvc pipe and cut one side of the ring it will overlap.

slip this into the end of the pipe you want to put the dc fitting in an mark where the overlap is when inside the pipe cut off the short section of the slice and place it on the dc fitting it should fit pretty close. if you want it tighter place a few wraps of duct tape around the filler slice to snug it up.

i can get some pics a bit later if this is’nt clear enough for you. (no insult intended!)

I dont even glue things up, just a screw thru the side of the pipe where the fittings come together.
Makes changing things around alot easier in the future and things are reusable.

Will get you some pics in a bit…

split
I usaed a band saw but any thing that will make a straight cut will work.Shown with a scrapof wood holding the kerf open. 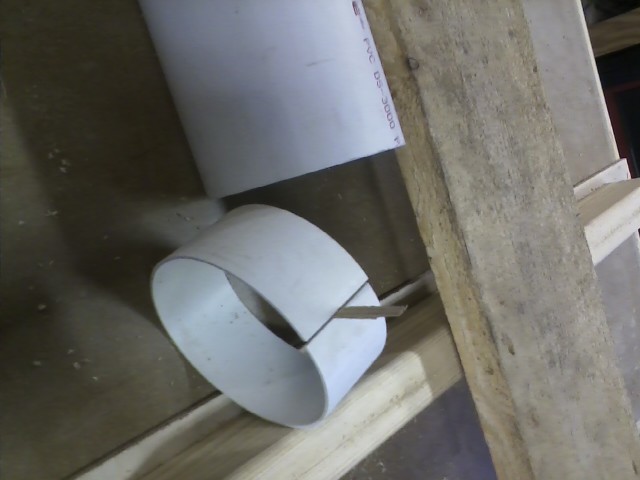 Mark the second, sectioning cut with the bslice/bushing in the end of the pipe. 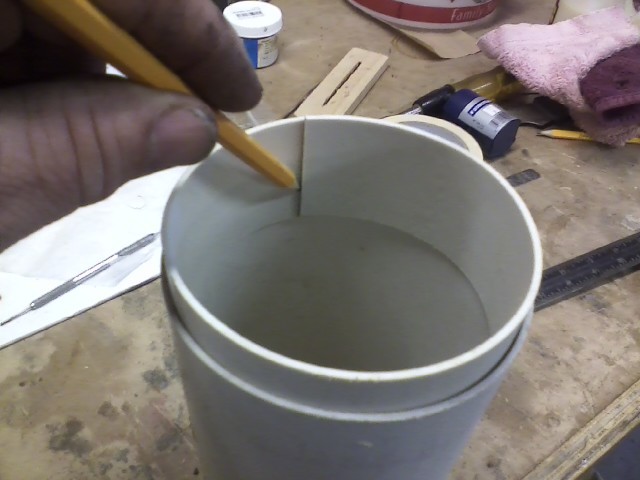 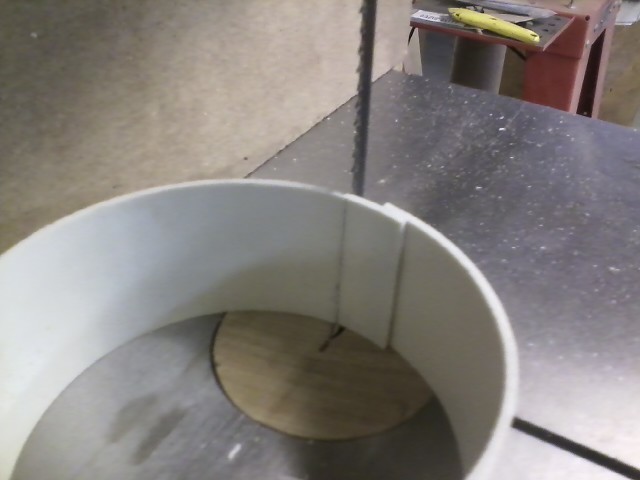 ake the second cut. I was a little more generous than I should have been since i wound up with a gap as seen in the second pic. 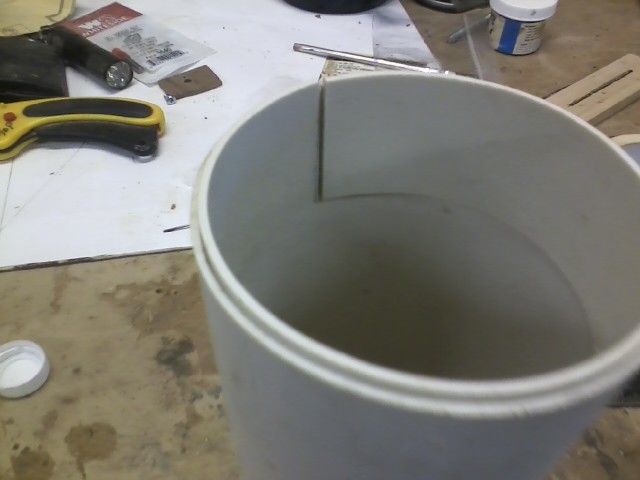 If youare conservative with the second cut this gap can be avoided.

As I said, this comes really close in my experience and if a more snug fit is desired, duct tape around the fitting before inserting it works really well.

I would suggest replacing that piece of flex with hard pipe where it connects to the DC. the flex robs you of alot of flow.
The use of long sweep 90’s and 45’s is a good plan though.

What I’ve always done when terminating schedule 40 is to cut several 3/4" saw kerfs across the open end. Then slide on a 5 1/2" radiator clamp followed by a blast gate. Tighten down the clamp over the pvc kerfs where the blast gate slides into the pipe.

Then use your 4" flex hose on the other side of the blast gate and hook the hose up to the offending machine.

Don’t buy plastic blast gates get the aluminum. The plastic ones clog up and are a pain to clean. The aluminum ones seldom ever clog up.

Also, buy good quality 4" flex hose. It will it will last much longer. I like the clear so I can see what’s going on.