If you go outside cut on pieces, it does very good sharp cut on corners. There is no inner sharp corners.
As you can see close up. Do you have the joined design as an .svg? I’ll cut it using my laser with a “bit” size of 0.01mm and see where any issues are with risking very small bits.

Thanks Alan, I will try it again with an outside cut and a .125 bit and see how it looks.

Random thought. I know that VCarve as a minimum resolution setting. Maybe try bumping that up an see if any of it is rounding error issues?

I think the V-Carve inlay feature is the solution. It will adjust ALL inside and outside corners so it should net out correctly.

But, looking at his carve - some of the errors on not sharp corners. This might be a post processor issue. I don’t use GRBL, I use Gecko and I had to switch from Gcode Arcs to plain Gcode to remedy a similar issue. Maybe try a run where your post processor is plain g-code?

I have not had any problems with accuracy on any other cuts using Vcarve, so I don’t think it is a problem with the post processor.

At first I thought the inlay feature would work also, then @badwolf pointed out it would make the corners worse because of the way it is rounding them.

I am pretty certain my main problem was the bit diameter I used was to large (as pointed out by @AlanDavis) , the other issue may be that I did an “on line” cut. Based on what others have advised, Cutting outside the vector may be a better option.

So when I have some time I will try to cut the puzzle again with a .0626 bit using an outside cut. If that does not fix the problem I will need to look at changing the shape of the curves I am using.

Once you get her dialed in, a puzzle cutting tutorial would be pretty cool to have out there. If not, please share your results.

I tried again with the same file, just changed the bit size to .0625 and did an outside cut instead of an on line profile.

The results are much improved. I think 99% of the improvement came from just using the smaller bit.

Here are a few pictures after a quick sanding to remove the tabs. The top edges still need a little cleanup. 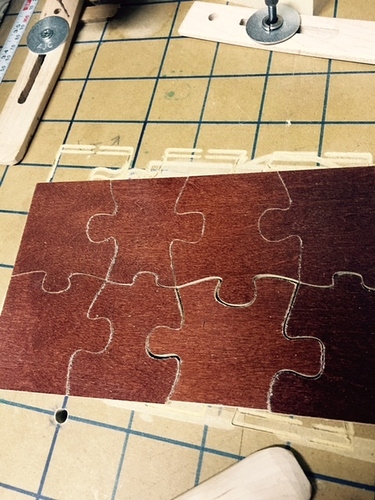 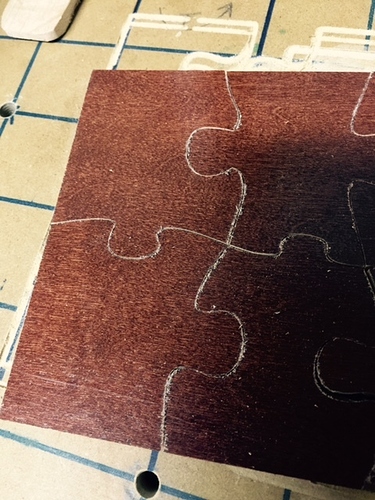 much better results than yesterday!

After cleanup, I don’t think the pieces could fit any better! I had to recut one piece from a different board because the tabs broke loose and the bit ate a bite out of it. 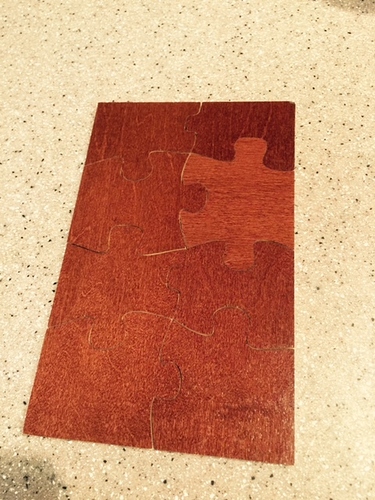 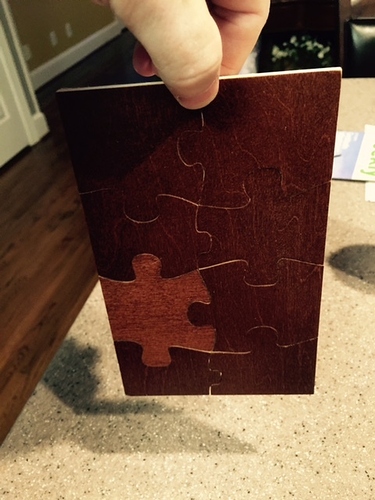 Now I just need to vcarve a picture on the face of it.

Looking great. Double sided carpet tape next time. Actually, now you can tape all together and carve some picture or similar to it (with slow feed rate).

Congrats! I still think we need to explore the cutting process. I can’t think of a reason why cutting “outside” with an 1/8" shouldn’t work, as long as the puzzle pieces are not interlocked and the distance between them is greater than the bit diameter. Hmmm…