Making my own Relay box

I got confirmation that my second X-Carve (2.0) is on it’s way so even before it arrives I’m making upgrades. I thought I would share what I’m working on. I’m making a relay box similar to the one Inventables has been working on but with a couple of changes. 1st I’m putting in switches for each relay so I can turn the on or off or under relay control. I then put in SSR’s. I don’t know if the one they are making is SSR or not but mine is. I then put in a cooling fan and not shown is an EFI filter on the Relays so there is no noise in the power lines. I 3D printed the extrusion and laser cut black acrylic for the front, back and top. I also went with a 4 pin aircraft connector so it’s locking. Finally I put an always on plug on the back so I can plug in my X-Controller into it and only have one power cord going to the wall. 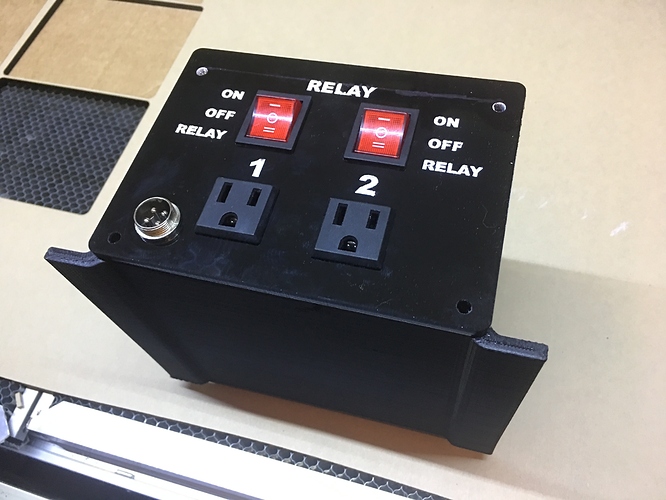 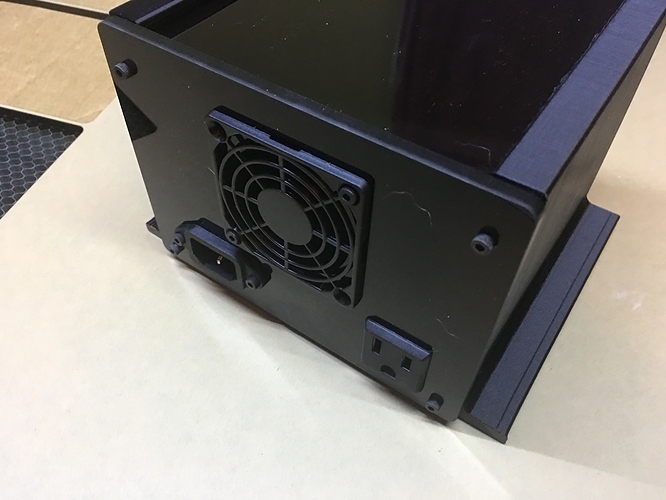 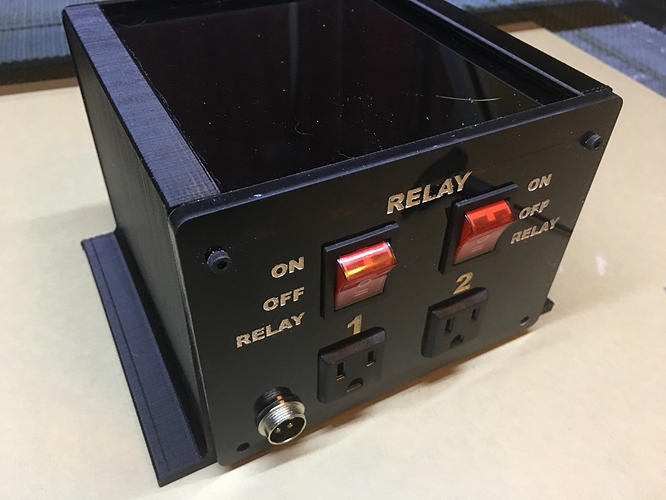 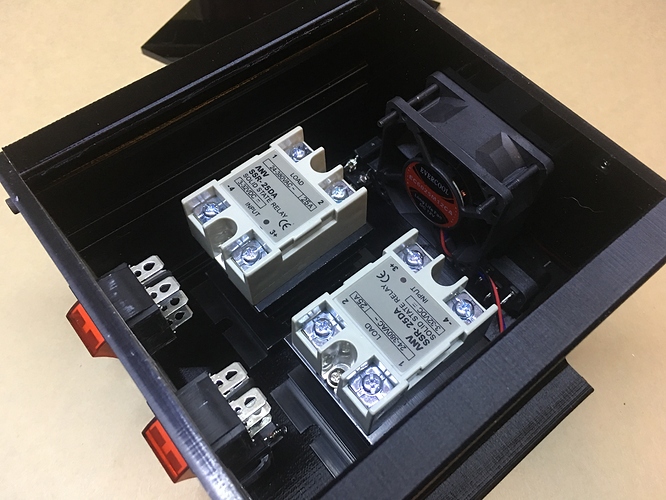 Make sure its really cool and those ssr’s are mounted on a heatsink they get really hot!

That’s really cool. What printer do you have? It did a really nice job on the housing.

Make sure its really cool and those ssr’s are mounted on a heatsink they get really hot!

You think heat will be an issue with those? That’s interesting. I’ve been looking at SSRs that are similarly rated thinking that having them rated for over twice the load I would need should help them remain fairly cool.

I’ve seen a few fires caused because of this. I don’t think it would be as bad as an issue in this case as they wouldnt switch on and off frequently. But they would still generate some heat. Better safe than sorry especially mounting them onto plastic. I’d for sure consider heat sinks.

I’ve seen a few fires caused by ssr’s mind you they where used for cooling and heating baths of water for hydrographic dipping. So the relays where flipping on and off quite frequently

Just something to keep in mind. I’d stick with mechanical relays. Allot safer in my opinion

It may be hard to see in the picture but the relays have huge independent heat syncs on them and the fan to pull air across them. I’m using the same SSR’s on my laser cutter and the heat syncs work great with 900w blower on each of them. It doesn’t even get warm about half way down the cooling fans.

Where is the air out ?

It will be out of the top. That part isn’t finished yet.

I love the box, I hope to build something close to this. I maintain over 100 ssrs, you should be OK other when / if those fail replace them with “random fire” not “zero crossing”, those are for resistive loads. The derating seems good so heat shouldn’t be a issue. You might want to add a resistor to protect the controller.

Alright, here is a question, I am new to CNC, but I know quite a bit of electrical, what are you using the relay box for? Is it to turn on the vacuum and cnc machine on at the same time? and the vacuum will turn off when the carve is done or what?

You are correct. One relay for the router and the other for the vacuum. Normally you could have the router and vacuum on the same relay but since there is also a mist option on the x-controller I figure why not go overboard and do both.

How are you powering the fan?

4th pin on the connector will carry 24v from the X-controller.

At the end of this thread is info on those devices.
Check it out.

Nice setup. Just run it little while while it's open to see if any heat you have, make sure. I'm using similar way, but my dust collector is 3 phase runs with 3 mechanical relays. I use this relay to trip them only.

I know this is an older thread. But I finally just got my ssr and other accessories after waiting almost 2 months to get them in the mail. I can seem to find any half decent enclosures. Id be interested to know if you’d be willing to sell me an enclosure like yours? Toss me a pm with how much you’d want for one. I unfortunately don’t have access to a 3d printer.

you have a mill…
Why not make a box?

I like the look of his that was made on a 3d printer. Something my CNC couldn’t do.