Manual gantry control while the X-Controller is on

If you’re using Easel, when the system is powered up, just click the ‘Carve’ button to gain access to the axis control buttons on the right side. You can then jog your spindle around as you like. When done, just click the X on that window to close it if you’re not ready to carve.

Yes, I know about the Carve button. I was hoping someone had figured out a way to write a VB script that would allow you to control the jog independently of the Carve button or even the Easel app all together. Or built a box to tie into the X-Controller that would have manual buttons on it that would move the spindle if you lost USB connection. On the tables that I have used in the past they had the manual buttons. It is worrisome to hear that there isn’t a shunt circuit to protect the controller from the movement of the gantry by hand. But thanks for the heads up!!!

Search for ‘pendant’ in these forums. People have already created what you’re looking for.

There is no solution to wire push buttons to control the stepper driver/X controller. The only solution for me would be through the USB communication (Easel or UGC) or moving the whole gantry by hand

There would be a way to manually move your gantry but it would require some custom wiring.
The solution would be two wire one side of each coil through NC relays so, when the contacts open, the stepper’s coils would be open. At that point you would be able to move them manually.
I would use a key switch that control a +24VDC or +12VDC relay (whatever the X-Controller power supply is)
I post a quick hand drawn electrical circuit for one stepper (don’t mind the quality please

)
I drew only one stepper but you would need to do that for every stepper. Either you use several relays controlled by the same key switch or you can find relays with a big set of contact control by the same coil that could cut more than one stepper.

I’m actually thinking adding such relays for mine too. 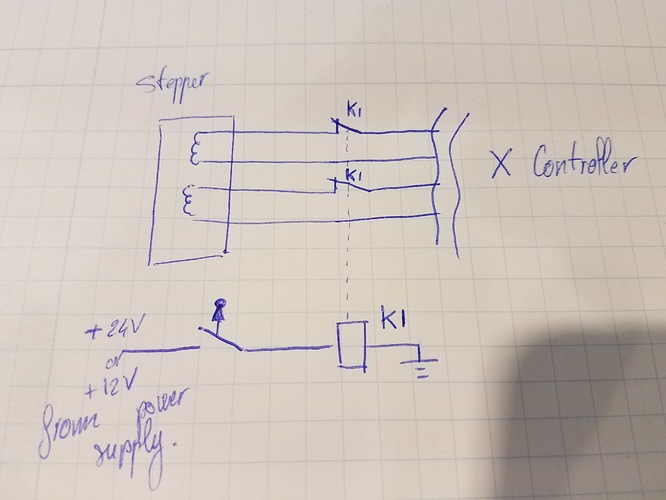 @RobertCanning It is a potential additional point of failure but by using NC contact, the failure will be when you want to switch in manual. If the relay burns the contact will stay close and you’ll keep operate as usual.
GaryArgabrite doesn’t want to have to connect and job the machine is case of failure. I would use the same way as you in case of failure.

It is true that other CNC machine have some hardwired jogging capabilities but not the X-Carve.
It is not really an issue for me as there are a lot of solutions to job the machine through UGC or other GRBL linked software.

Wasn’t there some solution to wire in an Xbox controller to control your machine? That’s one thing I’ve been meaning to do for a while now. Since they’re both USB, I would think it would be relatively easy to do.

Yes, it would have to a gcode sender open, of course. I believe it was some free program you could download, I can’t recall what it was. Basically it uses the inputs from your usb controller and converts them to the gcode sender. Since the analog sticks on an Xbox controller have a rather high resolution, you could control the speed dynamically, without the use of a different profile (but having one would certainly be useful, especially for the sake of my expensive detail bits). It would be nice to have an integrated controller to hard wire in controls.

I’m pretty sure there is a youtube video of an xbox controller on an x-carve, somewhere.

I do see the handiness of a pendant though. Especially if the jog distance was selectable on the pendant as well.

Right ?! I think there is a way with a Raspberry Pi, UGC for Pi, and a little touch screen

But that’s food for thought and a whole different project

The biggest problem that I have had is if something happens while I am carving and it stops or I have to hit the stop butter on the front of the controller, I can’t find a way to raise the Z axis so I can get the piece of stock out of the machine.

Are you hitting the “Pause Feed” button or the ESTOP button?

Hitting the pause button will stop the spindle and raise the Z. So you are probably hitting the ESTOP.
With the ESTOP engaged (no power to the motors), you can also manually turn the Z-axis.

Simply make a round knob, and attach it to the Z axis - Search the forum.

Anyway, you are going through learning pains…
Once you get all the details worked out, you will no longer need to hit the panic ESTOP and manually move the gantry.
Using the proper controls for everything will become second nature and you will break the bad habit of manually moving the gantry.

There are many talkers on this post already, “Its just USB, how hard could it be…” (sarcasm - it is hard - it doesn’t matter if it is USB or not). Using the right tool is what matters; in this case it is software and your PC. A stand alone non-PC method is not for the average user. You can’t just plug a joystick to your X-Controller and expect it to work.

It’s all about the software, not the hardware…
Get used to using the software jogging controls and then invest in using a hardware pendant: aka a joystick controller.
No relays, no switch boxes, just software and common pc hardware.

Yes, it’s all about the software since it’s all usb. It looks like XPadder is the program that several people are using. It looks like just a basic keyboard macro program that integrates with Easel (very clumsily). I was hoping there was a solution that integrated directly into windows game controller platform to pick up the analog inputs, but I haven’t found one yet.

Pretty sure the latest version of grbl has jog inputs defined.

I want a jog dial ASAP! I need to get on this.

oh, yes. You can’t drop a bomb shell like that without giving us a little more info! I’d love to see this!

“… those spinner-knobs cost a fortune!!”

It’s a matter of perspective.

The simple way is to learn G code and use any software that allows command line input.

G0G91Z1. will raise the spindle 1 in. or 1 millimeter (depending on the system you are working in) from it’s current position. G0G90Z1. will raise it 1 in/mm from the workpiece zero.

G90 and G91 are modal and remain active until changed. After Z is up Typing X6.Y6. after the first command will move the gantry 6 in/mm in the positive X and Y axis. G90 means you are working from the workpiece zero point (absolute) and G91 means you are working from the current position (incremental). If you are smart enough to build an external control, you can learn G code in no time, Nothing to build, buy or turn by hand. 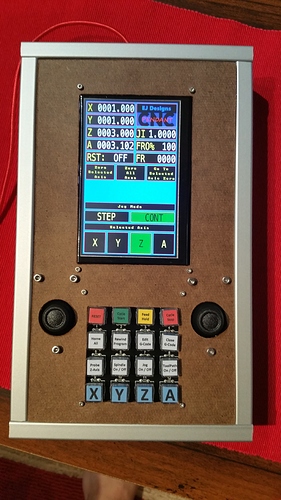 It’s all the same. It’s a CNC machine, tell it what to do and it does it. we call it programming. It works after a crash/estop, without resetting a piece of software or after an unintended stop of any kind. It may not be the question but it is (without doubt) the answer. the only requirement is a command line prompt. On real CNC machines it’s called MDI (manual Data input). If you were as lazy as you think, you’d learn to “talk” to your machine.

It is a 5" touchscreen controlled by an Arduino DUE (32bit Arm Processor) with 2 joysticks and a 16 button keypad. It connects to the PC by USB and controls Mach3. I have added a laser since i built this, so I have to add the laser controls to the firmware next.

Of course they didn’t think to put controls in the software other than in the carve settings, which doesn’t even allow instant access to them. Even in the controls there isn’t a pause or cancel command, once you click it goes all the way. And then some in certain situations. If the machine disconnects mid command or doesn’t stop where it should…by the time you notice and can react to press the red button it’s too late. Plowed right into the board and then some. Disappointed frustrated and due to: Half asss software… Thanks inventables, Happy holidays to you too! IMG_20181222_144335|666x500

You might find this interesting reading. Some of the names have been changed on the X controller.