I believe the link should be correctly shared now.
I basically masked out about 70% of the cut four times and cut them all as seperate carves.
I tried everything else that I could think of to get it to work and easel just kept locking everything up.
http://easel.inventables.com/projects/Yj9N1IWDXOdl15j6unIUCw

Looks cool Jason. I think that will help a bunch of people that have internet connection issues (I think that is why my Easel locks up)

This has inspired me to create a DC Comics and Battlestar Galactica calendar in this image which means I have to learn Inkscape better. In the past, I just used Inkscape to convert to SVG but with Phil helping me in the background, I’ve been collecting hero logo’s and silhouette’s and doing little side projects to expand my knowledge and experience on Inkscape.

I haven’t been big into comics once you pass the top 4 or 5 characters of each company so I’ve learned quite a bit about the DC characters. There are a ton of them!!! It seems like there are 20 different Flash’s, lol. Never knew there were a Batwoman, either. It’s almost comical how similar some of the them are, but I guess that’s why they call it comics! I picked about 20 characters to try to squeeze into the disc, so we’ll see what happens.

Learning inkscape is on my Todo, you should do a youtube video on the process, I have a few of these I want to do (Firefly, x files, lost in space, doctor who)

I really need to learn how to do this, Got and Lord of the Rings are ones I’d like to make as well…

I was gonna do mine in Inkscape and then import into VC. It’s be real cool to have 3d images instead of just a vcarve.

I got a piece of MDF all prepped over the weekend… sanded, lots of sanding sealer, followed by a nice primer, followed by a bronze spray paint. I started the carve about 30 mins ago. I’m hoping to avoid that first coat on top of everything and just be able to spray and wipe the recessed parts. We’ll see how it goes. I’m kinda new at working with MDF in this manner so it’s all experimentation on my part.

One thing I never saw was how long to wait after applying sanding sealer before going on to the next step. The destructions on the can say to wait at least 30 mins and no longer than 2 hrs before staining afterwards. When you guys use it, how long do you wait before carving/spraying? 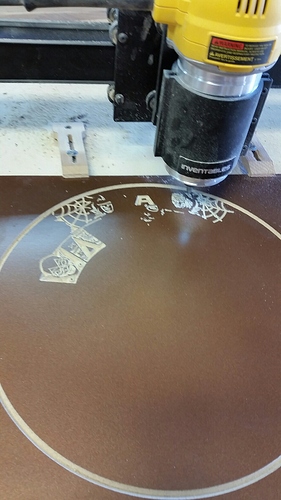 Heh heh… still going… got about 15mins left. I have to run my vcarve slower than I’d like or the z axis will slip on me. I think I set the cut depth too deep at .2". Too much of the bronze part is missing now. Am using a 60d Whiteside bit.

I’m not really liking it at around a 14" diameter. 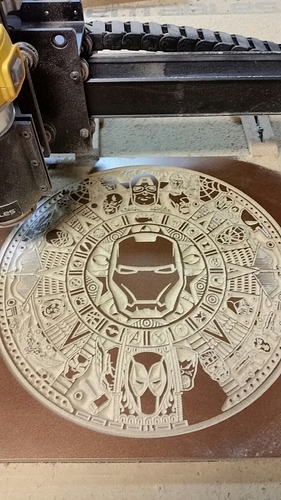 The final. It looks better in this pic than I think it looks in person. I’ll give a few coats of primer and re-try the bronze paint and we’ll see where it stands. I was wanting to paint the recessed area’s with a red color. 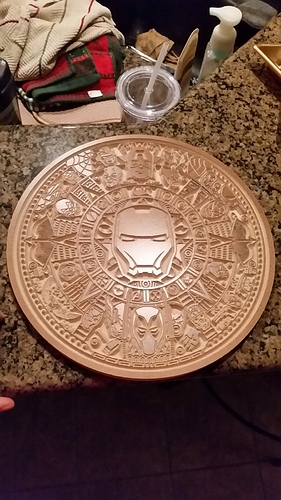 This is interesting and maybe many of you already know this… when I tried to hit it with the primer, it mainly coated the outer part. I had to get the can right up next to it to hit the recessed areas good. This is giving me an idea… I was going to do the Phil method of painting the surface first and then spray the recessed area and use a rag with mineral spirits to wipe off, but I may reverse this. I’ll get a little overspray into the recessed area’s but maybe not too much.

paint it red first then brush the bronze over top …

yeah… just put a coat of red on it. will come back later with another coat. It’s cold here today, my first attempt with primer resulted in cracking. I had to sand it it down, bring the paint in my office to warm up. I sprayed it, then brought it back into my office to dry in warmth.

I ran a copy of this with the jtech 3.8 laser on a 5" disk… it actually came out pretty good though I lost some of the detail at that scale. 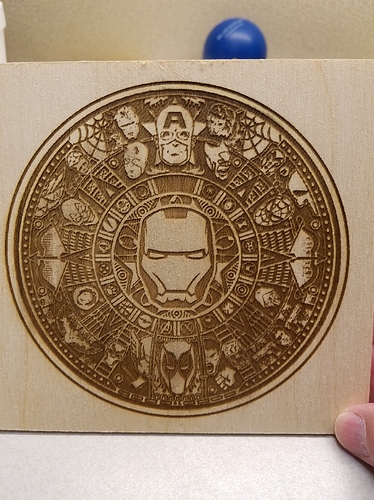 How much time does it get to get carved?