Agreed on the linear rack. Or you can use Matthis Wendals gear generator export to SVG and use easel to print. Have a test easel file with one ill cut out in next few days and post when I do.

Link for his project on a linear rack: http://woodgears.ca/shed/latch.html

I would like to try out the gear generator

Thought I would pass it on, I am using windows 10 and IE Edge… I noticed that on Win 8.1 you have to use the desktop version of IE and not the app version to get Easellocal to work. Windows 10 only has the app Edge… not sure if easellocal works but your apps for easel don’t work… you can open them… but there isn’t sliders to adjust the settings. 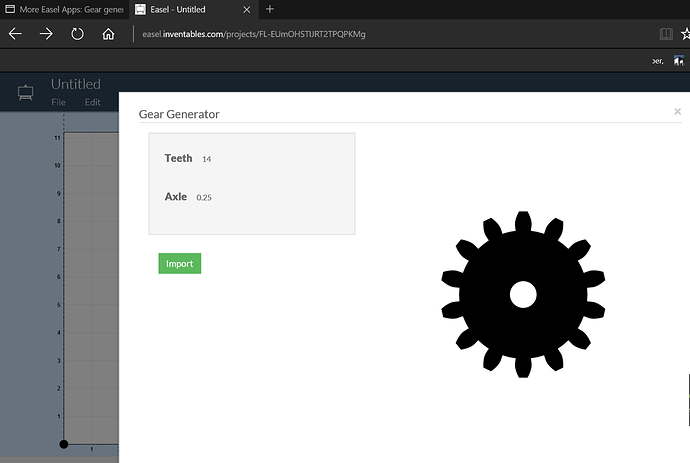 Oof that looks like a bug thanks for the screenshot!

Not a reply to your problem really just to say using IE on Windows 7 , 8, 8.1 and 10 have only ever seen the same as your picture have never seen the sliders on any of my computers. Am I missing a step in the process?

well, guess IE is just shi#-all for easel… installed chrome and they work just fine… just doesn’t run as fast and smooth as edge on my micro laptop/tablet that I am using right new for my x-carve. I’ll have get a screen for my other system that I was planning on running by half built 4x8 cnc. at least then I will have access to Mach3 and bobcam.

Tried Google Chrome and sliders there in all Easel Apps - really pleased. Thank you JohnSheak. Forgot I’d cured badly functioning online UK Ford Car Configurator by moving from IE to Google Chrome. Now fixed so I went back to IE!

I don’t think it does… its intended for printout to paper patterns. But it supports sketchup which outputs svg… or you could output bitmap image which easel now has a coverter so you could import it into easel and convert to vector.

I like this app, but I am trying to create a partial gear. I used the combine feature and a block, but I have not been able to figure out how to delete the horizontal line. I wan to be able to use easel to make a partial gear on a larger piece of mdf. Just like the picture below from inskcape. Does anyone have the specs on the gear easel uses?
thanks 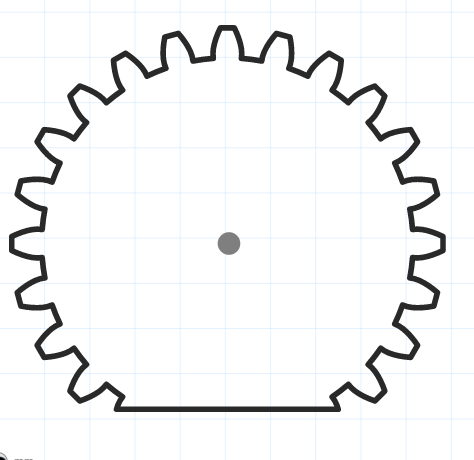 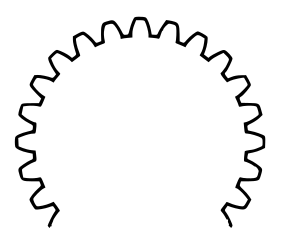 You could try and use the exploder app to seperate the gear into seperate elements and then delete the ones you don’t want. I’m not sure if that will work, but it’s worth a shot.

If you draw the gear, then place a rectangle over it. From the edit menu, select “Send to back” for the gear. Set the DOC for the rectangle to be zero. See if that will work for you

The border of the rectangle still shows. I tried the explode function, but it will not separate. Regards 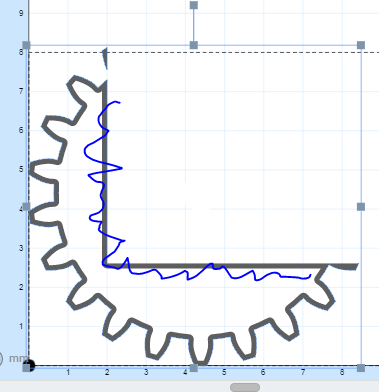 I am trying to make a one piece gear and arm together. I tried to do it with another software, but I was not successful at matching the gear parameters. 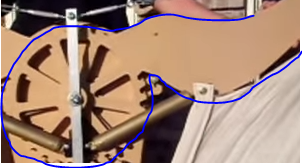 Do you get what you want if you set the rectangle to “fill”, and then set the depth to 0 ?

It shows a blank on the screen, but easel still writes the code to cut it. The I tried to combine it, but it gave me the previous results. Thanks for trying 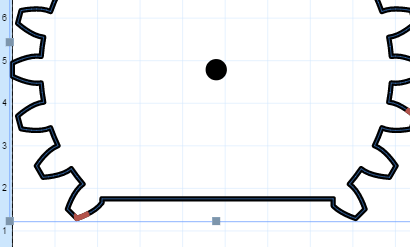 Say I wanted to make all the gears for a clock, but the default size is to big. How would I resize each of the gears individually to match the size I desire?

Would it work if you tried editing the size in the Shape floating menu?

I can change the size, but if it changes the size of the gears. if you have multiple gears, you need the teeth size to remain the same, so all the gears need to be changed at the same ratio. I am not sure how to do that with this app.