So in the very near future I’m going to have to transport my 1000x1000 X-Carve to a new house and wanted to know if anyone had some tips in doing so.

There shouldn’t be any issue with fitting it in a car for me, but I was a little concerned about the gantry’s sliding around during the drive and while tipping through doors, etc. What would you suggest to secure/tie it to avoid movement. I’d prefer to keep it in tact after putting all that time into assembly not too long ago.

Something as simple as zip ties would seem to work.

Something as simple as zip ties would seem to work.

er, scratch the last one.

Clamps on the rails to stop movement of the gantry might do the trick.

One thing I would be careful of if I were moving the machine is to not torque or warp the machine too much in the moving process. The more square you can keep it the less you will need to do when setting it back up. Either way, you will want to step back through re-tuning your machine once it is in it’s final spot… eg. re-square, re-check tension on belts, if tension changes on the belts then re-check steps per mm… etc.

The times I have moved mine, I used scraps of 1x2 cut to length to keep the gantry from moving around, and just wrapped those in masking tape so they stay put. A piece of 1x2 fits just about perfectly in the flat spot on the side of makerslide, so you don’t have the end of clamps and stuff hanging off the sides or anything, and between the 1x2s being wood and using painters tape to hold them in place it was easily reversible and didn’t do any damage to the machine itself during moving.

Sounds like a good idea. But as it stands at the moment I don’t have too much scrap wood. The only thing I have in enough supply currently is various pink insulation foam. That should probably do the trick, no?

That should be OK, too, unless you’re REALLY banging the machine around. But if not, an 8 foot 1x2 furring strip at the home store is what, like $4? Maybe less?

Nah, it should sit nice and flat in the Mrs’ suv and almost all highway between the two places.

Put a couple spring clips on the maker slide 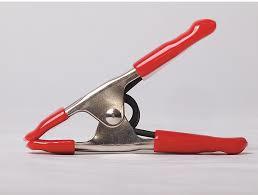 I just moved my unit from inside my house to a new bench I built in the garage. I put zip ties on both sides of each stepper motor assembly, around the extrusion and right next to each pulley and idler. No movement at all on either axis. It’s simple, and I think this would work even for a drive, although with a drive and the bumpin’ and jumpin’ you might get, I would recheck square on everything once you’re set at your new location. Keddy

It survived the move without incident! Ended up taping some insulation foam along the rails to keep everything secure. Since I didn’t want to disconnect the wires either, I used my clamps to hold the power supply unit to the surface. 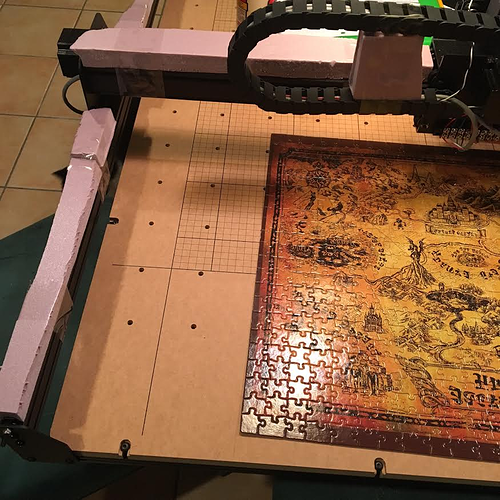 Howdy all. Has anyone had any experience moving since the last post on this thread? I’m about to move halfway across the country with the added fun of renting in the new spot temporarily. We are having a house built in the new location. The X-carve will be stored until the shop is built. I will have a mover for some stuff and a rental trailer. I want to plan to have the mover take the X-carve. I’ll tie up all of the gantries and such but I was thinking about building some sort of frame out of 2x2 or 2x4 to protect it all. I’m thinking they would want to place it on it’s side. Anyone have this type of experience?

I do plan to take it apart when setting it up in the new shop to add in some upgrades I purchased but have yet to install. I guess I could always take it apart now. I still want to pack it so it is protected and the maker bars don’t get messed up.

It is the meter X meter version.

When I moved from North Carolina to Texas in 2020, with my X-Carve, I built a box around it out of 3/4" plywood. I put wooden stays in place to keep it from moving and to make sure that any weight that was placed on top was transferred through the solid structure. I didn’t want to disassemble it. Space was less of an issue since my new company had hired movers but I packed this myself.

It came through the move just fine but I did have to take the time to double check the calibration. Just to get it all back in sync.

I have it on a plywood cart that I am not taking (I’ll have an actual shop instead of a small/shared garage and will have a dedicated space for it) so I will disassembly and create a shipping container out of it. I really appreciate the tip. I have a little more confidence now.