After a somewhat painful ordering process I’ve finally got my 750mm x-carve and started assembly.

I shall document here, what goes right and what… has immediately gone wrong.

I got the 64 inserts installed just fine and dandy. No issues there at all. But now I have moved on to the base rails under the spoilboard. Had to walk away after about 20-30 minutes of fighting those. I would just like to smack the person silly that decided to make those as stupidly tight as they are. I’ve tried doing it the way shown on the assembly instructions… screw and t-slot nut on loosely in the center and sides… I’ve tried placing the nut in the rail and then trying to screw it in… I’ve tried talking nicely to it… cussing it… I even offered it a nice seafood dinner. And lacking any power tools here right now, I cannot even make the hole slightly deeper to give me more clearance. They simply will NOT fit into the rail because they are too tight. Hole needs to be deeper or the screw longer or the walls of the rail thinner… or my patience needs to be longer. ONE or a combination of those things.

I think I’ll go back downstairs now and ignore the directions that say to keep the “nub” side pointing out and see if it’ll fit between the rail openings because that would give me the clearance needed if it does.

Nope. That don’t work. Won’t fit through the opening in the slide.

Sigh. I guess I’ll run to Menards and see if I can find screws that are a little bit longer. It shouldn’t be this difficult…

Can you post anything showing your issues? The videos showing assembly on YouTube are really robust, so the issue you’re having shouldn’t be happening.

Not really anything to show that I’m aware of. The t-nut can only slide in one direction (nub away from the board). I just think the holes in the wasteboard weren’t drilled deep enough is my guess. I haven’t tested to make sure it’s completely flat but if not, that would probably explain why they weren’t deep enough. Basically I turn the nut on JUST far enough for it to stay attached to the screw and there’s just not quite enough clearance to slide the rails on. I managed to get ONE of them on but it was so tight I had to put considerable force on it to slide it into place. If the hole was 1 or 2 mm deeper or the screw was that much longer it would be perfectly fine.

I’ll check the videos on youtube but I’m pretty sure I’m doing it right. I just think this was a manufacturing issue with the wasteboard.

Nope. You were right. I’m an idiot. I got my bags mixed up and was trying to use 10mm instead of 12mm to attach it to the board. At least I was right in that I needed about 2mm more.

So anyway… Bottom rails are on and just need to make sure the overhang is equal on the two longer rails. I’ll deal with that tomorrow. For now I’ll just go pretend I’m not a dumbass and watch some TV.

Now that I’m not being a COMPLETE idiot… has anyone had any issues with the eccentric spacer not wanting to go in the holes of the gantry plates? I’ve tried multiple spacers in all four holes and the holes are just a little bit too small for the shoulder to go in there. Should I take a round file and open the hole slightly? It feels like when you paint over a screw hole and the paint fills the hole just enough to make it too snug. Or should I just start torquing things down and it’ll make it’s way into the hole?

You’re not alone, and you’re correct - it’s the powder coating filling in the hole making it a little too snug for the shoulder of the eccentric nuts.

You can use whatever method suits you best to clear them out.

Thanks. I took a small round file and got it together fine after that. At this rate I should have it all put together by about June.

Made some good headway last night… Well… for me anyway. I did the X carriage and it went together quite fast and easily. Even the eccentric spacers had no issue. I only ran into one oddity and that was the limit switch. The instructions indicated using the tiny hex nuts on the back of the screws and I didn’t have any needle nosed pliers to tighten them with so I was just going to finger tighten it and come back today with a pair and finish it… But lo and behold… the holes were tapped and threaded like they were on the Y gantry plate, so I tightened it down the same as that one and left the nuts off entirely. I doubt it’s going to rattle loose, but if it does I’ll just add some lock-tite.

I consider last night a success as I didn’t run into anything that made me want to pull any more of my rather sparse amount of hair out of my head.

I think I remember mine being the same.

You do want to make sure those switches aren’t going to budge (without cranking down too hard on the securing screws - those switches are delicate), because if they do, your homing reference point will shift a little. It wouldn’t make a difference to the overall operation of the machine, but it might cost you a multi-stage carve at some point down the road. 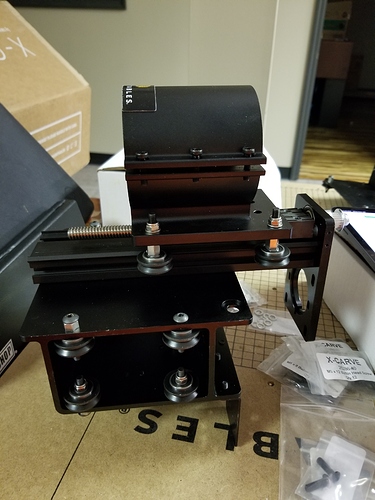 Starting to look like something. Z axis mostly finished. Need to get the limit switch on it yet. I hope I’m not supposed to be able to turn the screw by hand because… I can’t. Right now that’s my only concern I think. Other than that… I might be able to get this thing put together by the weekend and to a test carve.

A) It helps if I lube the screw… and
B) Had to back the screws out a bit that go into the delrin nut. Too tight and the Z axis won’t turn at all.

Hope those screws don’t loosen up and cause issues later, but at least it turns by hand now.

Aaaaand got part of the gantry put together tonight. Tomorrow… Get all of the mechanicals put together and hopefully the electronics on saturday and be cutting by sunday. I hope. Maybe. If I’m lucky.

I just got done assembling my 1000mm. I found that while following the inventables instructions and also simultaneously following the New Brit Workshop videos it went really smooth and I would say it probably took me a total of 6 hours.

Yeah I’ve been doing the same… But I’m only spending 20-60 minutes at a time on the assembly. Too many things to do in a day. Aside from the problems I’ve made for myself, I’d say I probably only have a couple hours in it so far. I’m trying to be as careful and patient as possible. Patience has never been a strong suit for me.

Starting to look like something… Even if I did realized too late that I put the whole gantry system and rails on the wasteboard backwards. 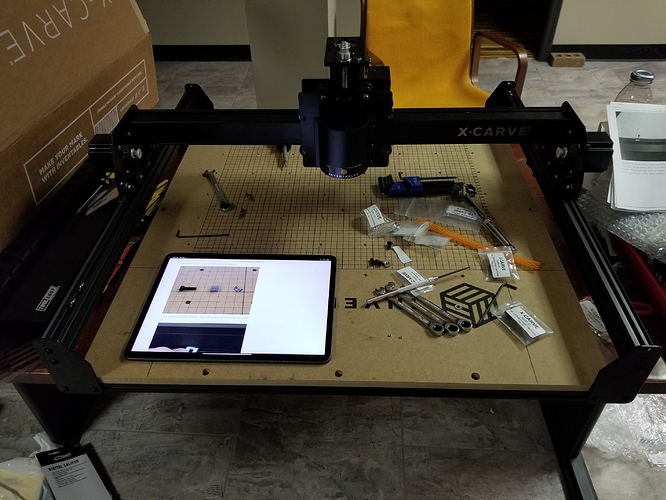 It’s not too late - I did the same thing when I put mine together.

If you push the gantry all the way back, you can unscrew the bolts holding down the wasteboard and angle it out. Spin it 180°, angle it back in, and bolt it back down (the T nuts will be where you need them).

I might give that a shot. I tried taking the gantry off but those screws have decided they do not want to budge. So I tightened the one that I did get loose back up and started on the belting. But I didn’t think I could remove the wasteboard with it all put together. I’ll give that a look.