My circles are ovals

Also be aware that if the belt tension was not set correctly or if the vwheel eccentric nuts weren’t set correctly prior to the calibration then the resulting values may be inaccurate.

After entering these new values rerun the movement test… ohh and the longer the movement, the more accurate the calibration value will be, so if your cnc can move further than 100mm, i would use a longer movement…

also in case you don’t have longer metric measuring tools it doesn’t actually matter if you calibrate using metric or imperial the measurement units all wash out in the math.

Thanx Seth, yes, when I watched the tutorial I got the impression that the $100 & $101 could be set differently, but a friend who uses CNC machines for a living, told me in no uncertain terms that they MUST be the same numbers, which is why I stated that in my previous post.
After reading some of the posts in the forum about Belt tensioning, I think my next task will be to check my belt tension (I’ve broken a Y belt already) and then do the calibration again.
I will do the X & Y lines at 200mm
Thank you again Seth. 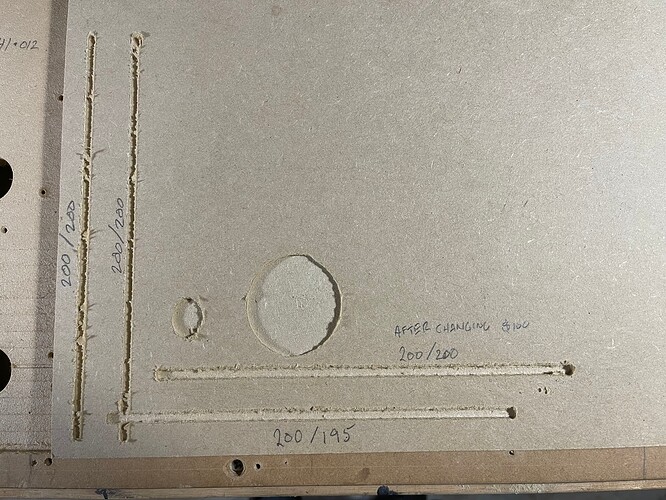 Well, the measurement and calibration process should occur in air, and not when carving because other variables come into play while carving like belt tension, and eccentric nut adjustment which causes deflection if loose. So make sure to check the eccentric nuts on the vwheels as well as the belts, and preform the calibration as shown in that video.