My extended height x-carve in its new workbench 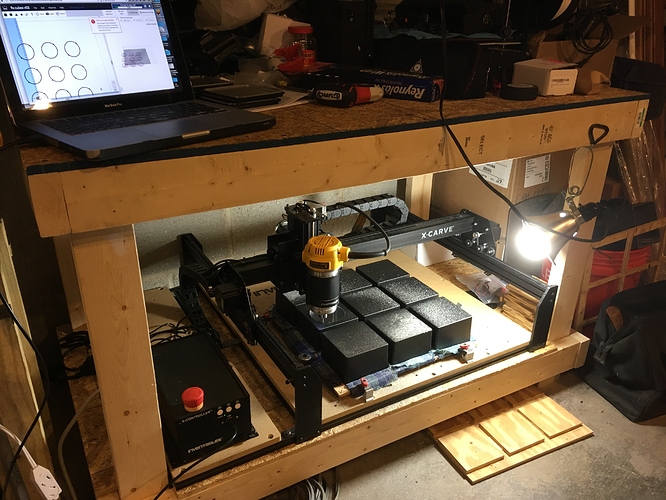 Just wanted to post this pic of my X-Carve milling some cases in the workbench I built. I adapted some online plans for a 2x4 workbench to fit the dimensions of the x-carve on the lower shelf. This way I can still use the top of the workbench when I’m not carving. Some better lighting will be added eventually, and probably better cable management. I just set up an old Mac Mini on the top of the workbench last night, but that didn’t make it into the pic.

You might notice that my Y rails are a lot higher than stock. My first project was to cut new end supports out of delrin so that I can carve these aluminum project boxes that are about 3.5" high. This has greatly simplified my workflow, and is the majority of what this CNC will do during its lifetime. When I want to cut something shorter, I have to build up the base about 3" but that’s ok as it doesn’t happen often.

how stiff are the new ends? I have a bunch of 3/8 UHMW, which is similar. I thought about making some but I was worried about flex.

I can’t flex them by hand. I don’t see any slop or movement when the machine is running. I’m not able to accurately measure any small amounts of flex that there might be though. For what I’m doing, the 1/4 delrin is perfect.

How much height did you get?
If you used Delrin for the end plates then you might want to check for shift. Plastic does not do well with vibration. Eventually they will wear out.
if all you needed was an extra inch then these are the best deal around.

I like the idea of moving the router down to gain about .5" then I will use another board on top


Charlie sells them cheaper than you can make them. He is a great guy and these aluminum plates are rigid as hell and will not wear out like the plastic would.

You also must be in great physical shape. Having the machine that close to the floor means a lot of bending over and use of the back and knees. Some of us here are not that limber anymore.

I added about 3" to the height of the stock end plates.
Yeah, I’ll keep an eye on my end plates. I’m pretty impressed with the delrin though, it really doesn’t flex at all. I would guess I’m going to get quite a few years out of them before I have to make new ones.

The bending is what gets me the extra table space, so it’s ok by me. My main concern is the possibility that the basement floods, but I suppose that’s what homeowners insurance is for.