Here is a cedar sign I made for my sister and her husband as a wedding gift. I cut some cedar into 2"x 1 1/2" strips and edge glued it together. took about 7 hours to carve all with a 1/8" bit…Learned a lot. 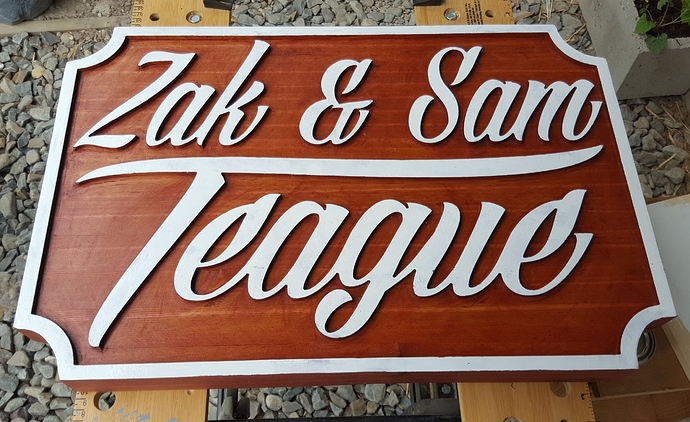 Glue up blanks is pretty much the best I have found looks pretty good!

Good job on the sign.
What wood stain did you use?

So I have a question for the more experienced CNC’ers here. Assuming I have a machine with limit switches - Is there a way to say: “Hog out this area with a 1/4” bit, but this area needs fine detail"?

Either the CAM I’ve used (MakerCam, Fusion 360, Carbide Create) don’t have this feature, or I haven’t discovered it. I don’t want to go over the entire pocket / profile twice - once with the large bit and the second time for the finish bit. I’d prefer that the software realize where there’s no detail left to remove with the finer bit.

Fusion 360 supports rough and detail passes. So does Easel. You don’t even need limit switches to use that feature.

For Fusion 360 search on REST milling.

Thanks - I figured there had to be something in Fusion 360 - The number of CAM options is bewildering. I could really benefit from a sit-down with the docs so I can get a better handle on it.

F360 has a really steep learning curve, I still play with it trying to gain enough confidence to use it more. But for me the simplicity of Vcarve makes it my goto Design and Toolpath solution. If you have not tried the free trial version of Vcarve you should take a look at it. At $350 it is not an easy decison but after banging my head against F360 and lots of the free solutions I finally gave in. I have never regretted the purchase.

I downloaded the trial version of VCarve a couple of weeks ago, but found that the trial was too limiting to do anything useful. I wanted to see what it would do with an SVG that was giving me issues in F-Engrave. In the end, I managed to take care of it in MakerCam.

As a hobbyist, $350 for software is just too steep for me to pay. That’s almost half of what the CNC itself cost.

I was not going to buy it till I saw that the Paradise Box project would work with the trial version. Get yourself a 60 deg Vbit and make the top of the box. When I saw what was possible with a properly controlled vbit I was sold. I carried that carved top upstairs to my wife and she finally understood what a CNC router could do (that my other power tools could not do). 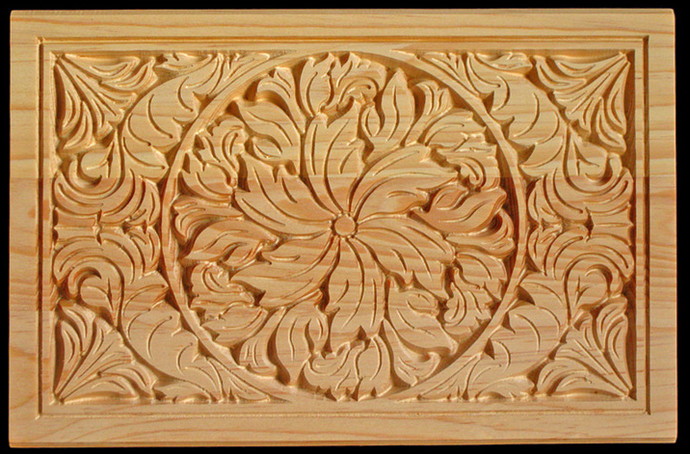 I’ve found that F-engrave does that, and it’s free.

Let me say again - I love the project. The sign looks awesome and it’s an inspiring project. My apologies for de-railing the conversation.

Bob, your sign looks great. I have not tried gluing up large sheets yet. Did you use a planner after they dried?

Do you see any lines where the wood joins before you stain/paint?

Just at work at the moment, I’ll get the name of the font when I get home. As for gluing up the wood, I ripped a 2x6 deck board in half (also removing the rounded outside edges) and turned the on their sides so the factory edges were glued up, I had to glue it in two 9" pieces so I could run them thru the planer after, then glued the two pieces together.

Also the font I used I had to tweak a little, had some little points on each letter that would have chipped out. Also the top of the T was extended to go over the whole last name.

Also the stain I used was a minwax stain, can’t remember the color, will get that when I get home as well.

So the font is called Angilla Tattoo font, found it on dafont.com. One of my favorite fonts.

Yah, I clipped only the over laps – hence the pointies pointing left. He joined, clipped those off and embellished. Still a fun font to play with.

I would suggest looking into TurboCAD Deluxe 2022. I bought it for only $99 and I use it all the time. I also paid like an extra $130 for a pro to train me how to use it via screen sharing and voice chat. I use my cnc a lot for creating templates out of 3/16" acrylic. They are then used to grind knives for custom milling jobs for my local cedar mill.

They use these knives for making log cabin shiplap, tongue and groove, combed profiles and a ton of different trim/moulding profiles.

-I cut a very thin piece of each wood sample and then scan it in a his resolution photo.

-import it into turbo cad and scale it to its actually size.