My idea for water cooling

I’m in the middle of some major updates and I thought I would share. It’s going to be a semi-closed system when I’m done. I have the 5 gallon bucket w/ 1/2" tube feeding a Iwata Aquarium pump. Then out of the pump to a automobile heater core tie wrapped to the front of the fan. Out of the heater core to the spindle and then back to the bucket. I’m also pointing the fan towards the pump to help cool it off as well. I’m using my old 110vac relay module to turn on the pump/ fan with the VFD I just installed. 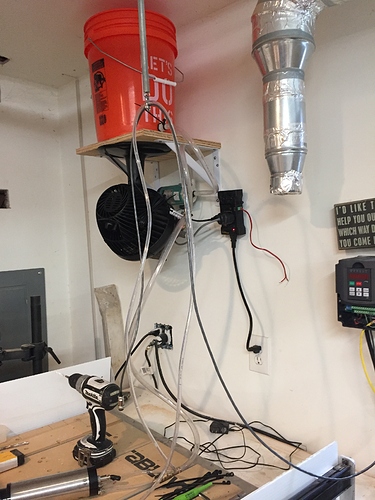 Whoa! I love it, straight up McGyver right there!

I would just do it the way you would cool a laser system.
Similar with the bucket but you use a submersible pump type that is more powerful than the aquarium.
With a better pump you do not have to have it up high.
I had a 5gal bucket creates 1/4 inch holes for the in and out then notched a spot for the power to the pump on the side. Then use grommets to keep the hoses in place and used distilled water. This feed into the laser head and cooled it.
Works great and circulates lots of water through the system. No need for an external cooler.
The more water you can circulate the better. Also this was for a laser and not a spindle.
Do some research on what they use for a spindle cooling system and its probably not that much. what I did for a laser system may be overkill for what your doing.

Sorry to be a nay-sayer, but that looks scary to me. 35-40lbs of water suspended over machinery, looks like an accident in the making.

I found some cheep parts on ebay under ‘computer water cooling’.

So, I’ve spent the last 6 months researching this and actually did the math on how much water is required to cool the thermal load of the spindle. Those computer cooling systems are cute but they lack enough water in the system to be effective for this use, like a factor of ten but you can do the math yourself just google search for the calc and you’ll find it.
I tried a submersible pump to begin with and it heated up the water to much as it uses the water to cool the bearings where a aquarium pump has a fan. Also this pump is rated for continuous use and is far stronger than a submersible. Your 10 watt laser Stephen doesn’t have anywhere near the thermal load of this 800 watt spindle so the system is designed accordingly.
I really wanted a purpose built CNC Cooler but the real ones start at $700 and go up quickly, I have $150 in this setup.
As far as having it over my machine if I wasn’t 100% sure in my craftsmanship and my design I wouldn’t have done it this way. It has been and will continue to be throughly tested but I’m confident it will work.

My advice - add some kind of strap (like a water heater strap) around the bucket so it can’t be pulled off the shelf by a snagged water line or other unforeseen event.

Like a cat? A cat is always an unforeseen event

I would consider a sheep a large unforeseen event.

@JeffAnderson I have been running an 800w water cooled spindle for about a year and a half now – I have it hooked up to a PC style water cooling system (120mm radiator / fan, closed loop) and with the fan running at a relatively low speed it rarely gets to more than 100f. Consider that even running max RPM it’s not going to be actually generating 800w of heat, especially if you are milling softer materials like wood and plastic. I have run multi-hour-long jobs milling aluminum plate and never had a problem with heat. It doesn’t hurt to have extra cooling capacity but it may not be strictly necessary.

I’m trying to understand without knowing anything about my situation or needs you can speak to me about what is necessary or not but it doesn’t matter. I don’t come here to justify myself to anyone, I don’t need to. I just wanted to share an idea I had to solve a problem. Remember before you pass judgement on someone else that they are not you and will solve problems differently, it doesn’t make them wrong just different. I want a great solution without spending a ton of cash and I did. I’ve done multi-hour test carves and not raised the water temp 3 degrees in my mind I’ve accomplished what I set out to do. I personally don’t like the PC cooling systems and in this instance the math says I’m right so I’m good with that.

@JeffAnderson I was simply offering my experience since there may be other potential users who are interested in possible designs. I think both designs (closed loop and open loop) are fine and it is primarily a matter of available space, available equipment, usage patterns, etc. That is all.

I hope I didn’t come of a sounding too critical. I only wanted to point out a potential hazard. I was concerned for your safety.

I’m good, let me introduce myself my name is Jeff I’m an Low Voltage Electronics technician working in construction for the last 25 years. i live in Chalmette, Louisiana. I’ve done woodworking for 15 years now and I think I’m starting to good at it. I rebuilt my house and shop after Katrina so I kinda chuckled after your reply, I know how to build and usually overdo it so I’m not in any danger of that shelf coming down. I could jump up and down on it and it wouldn’t go anywhere.

@JeffAnderson, My intent isn’t to bash your design, in fact, the shelf supports under the bucket are beefy to say the least and I do like the concepts in your design, especially the heater core.much more effective than just depending on a large mass of water to carry away the heat.
But my first thought was, what if something decides to leak?
Say you flip a board around and happen to connect with a water line, you look at it and nothing is obvious, and you go on with your day. .

The next morning you come out to the shop and you x carve looks like a scale model of Houston Texas right about now. (Sorry I couldnt resist)
I dont know how you have you lines connected but be confident in your construction and double check everything. Is there a specific reason for the reservoir to be elevated? Floor space issues perhaps?
Some form of retention device, even a length of old electrical wire as a retention device in front of that Homer bucket would’t be a bad insurance policy against future heartbreak.

PS I like the line, “I’ve been doing it or 15 years and I think I’m starting to get good at it”. Sounds like me but I’ve been at it for about 22 or so years.

Anytime you use a water cooled system your rolling the dice on a leak. In fact I thought about a snag so I used thick walled tubing. I haven’t taken a recent picture but now the bucket sits in a pan on the shelf with a drain line attached to it.

The reason to put it up high was the best question so far and I’m glad you asked. In my reasearch I found that in all of the well designed PC cooling systems every piece of the system was installed on the Z Axis on machines far larger than the X-Carve which doesn’t have that option. The pumps in those systems aren’t designed to push water any distance and certainly not any head pressure so I still would have been mounting pieces of it in my wall behind the machine and I still think I would have had a problem with head pressure. Which brings me why I mounted mine up high and it’s all about head pressure. I was/ am still concerned about the different size tubing that I had to use. I had to step down to 3/16 ID tubing in order to connect to the Spindle from 1/2 ID. That’s a huge step down and I didn’t want the pump to waste any energy getting water to it so now it has 5gl of head pressure on it at all times so all it has to do is get the water through everything else.

I did come up with another idea after this setup was finished that I think might work. At my office our water cooler has a water line connected to it instead of a 5 gallon jug. See where I’m going here right? I haven’t had a chance to look at one of those $1000 purpose built CNC water coolers but I bet you they are the same thing. Might not be a bad idea to hook up a water cooler to a pump and then to the spindle.

I’m making an anaology here but in my profession, Lp delivery and service , when hooking up many tankless hot water heaters, the installation needs a specified length of over sized gas line just up stream from the appliance to act as a reservoir for the needed surge when the heater fires up.

Using said analogy, keeping the smaller 3/16" line as short as possible then stepping up to 1/2" as soon as practical, as well as the head pressure, (hadn’t thought of that one BTW bu it makes a helluvalotta sense) your flow losses are probably less than you think. Avoid the use of elbows in the line as much as possible, the radical change in direction will cut the flow drastically, just like in dust collection systems.

The drip pan is a great idea as well with the tubing drain, it addresses the concern I had with 5 gallons of water above an electrical outlet

Do you have a means of monitoring the water level in the bucket without climbing a ladder?
might a sight glass be feasible?