After commenting on another thread about airflow when carving materials that melt, I decided to snap some photos of my setup. Perhaps someone might pick up on something that could help them. First things first, my shop is your standard 2 car garage. We do park 2 vehicles in the garage at night so all my horizontal work surfaces and tools are on wheels. I don’t have the wall space to give to having the xcarve flip up against a wall, and I wasn’t to keen on taking the time to set up the machine just to tilt the thing on edge and have it possibly get out of whack.

So I got a drill powered ceiling storage lift. Capacity is 250 pounds. 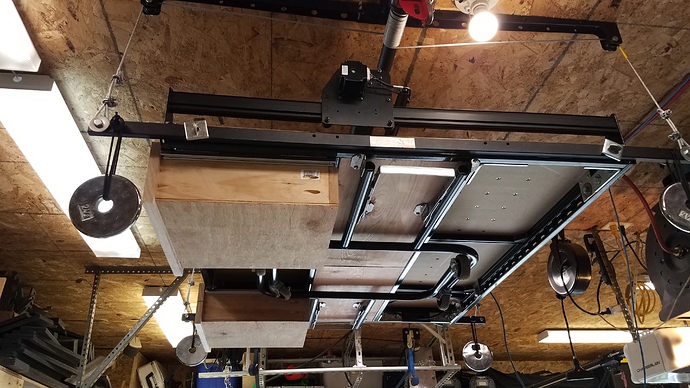 It has a locking mechanism and it came with an adapter to chuck it into a cordless drill to wind it up and down. 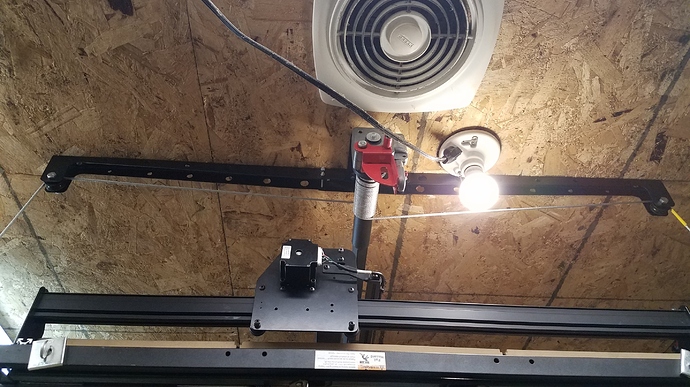 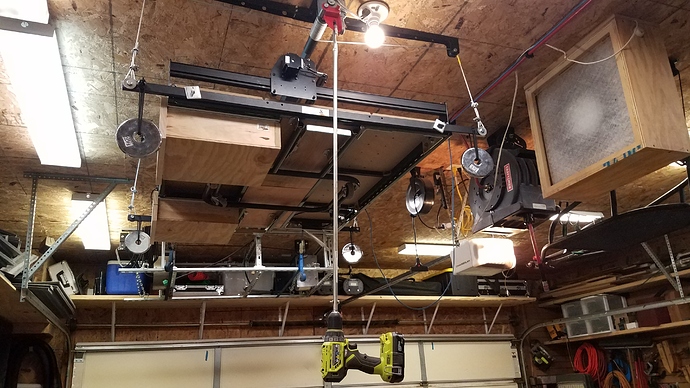 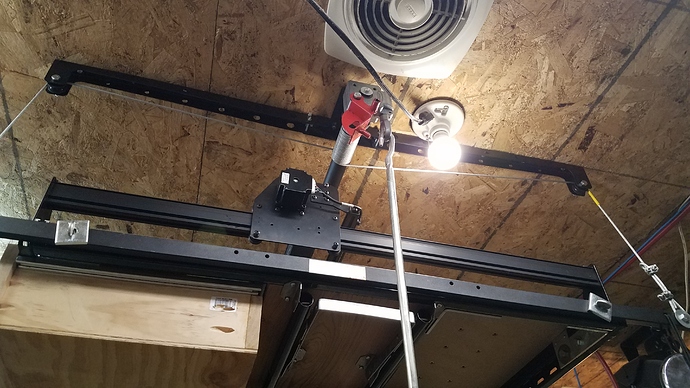 The black bars that came with the lift are meant to have this wire shelving stuff spanning in between to hold stuff. I discarded the wire shelving and drilled a couple holes in the black bars so they could be bolted right to the table itself. 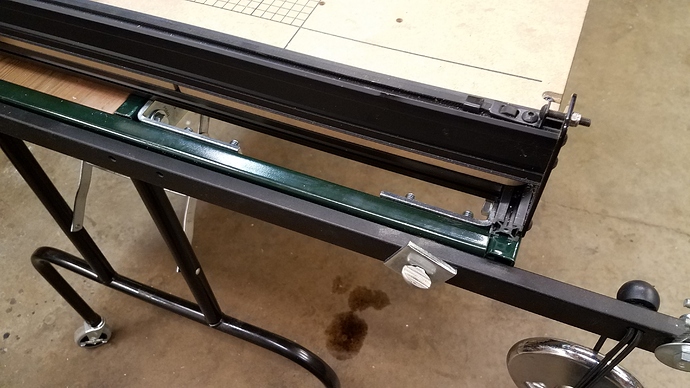 The table itself is made from Unistrut. this stuff is meant to be used to hang conduit and pipes from overhead. Pretty common stuff. It uses these special nuts that grab on to a lip on the inside of the unistrut. It is a pretty slick system. The square washers and the L brackets are part of the same system. Everything is put together with 3/8-16 bolts, washers and nuts. I added some 2x12 wood in the middle so I had a place to mount the legs. These are your standard, locking banquet table legs. the ones I got lock in both the up and down positions. I welded t-nuts to the bottom of the legs, then cut a hole in the center of the plastic foot that came with the legs so I could screw in the casters. Also, the legs are installed just slightly offset so they will fold up. 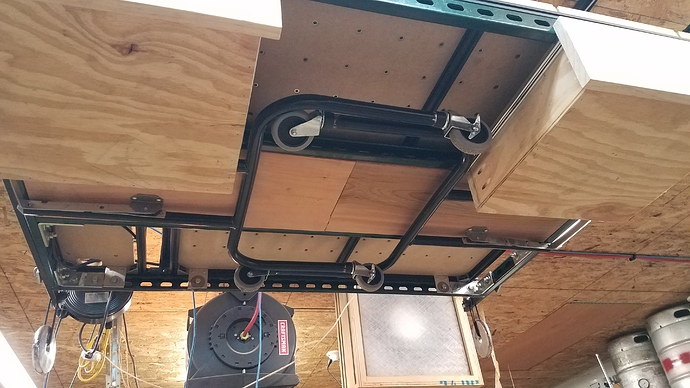 I have a 2 1/2 pound weight hanging on each end of the black bars. I found that in order to wind the mounting bars up out of the way, you need a little weight or the steel cable gets snarled up. One of the bars has a network cable attached to it. The cable goes up to the ceiling, over to the common house wall, then into the house and connects directly to the router. I have another cat5 cable attached to the xcarve table that gives me enough slack to move the xcarve pretty much anywhere around the shop. 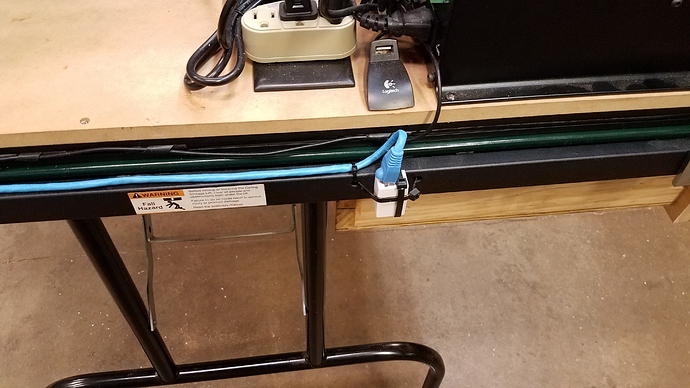 I got the inventables extension wing and just behind where the xcontroller mounts is a space just big enough for an outlet. I wired up and extension cord and voila! 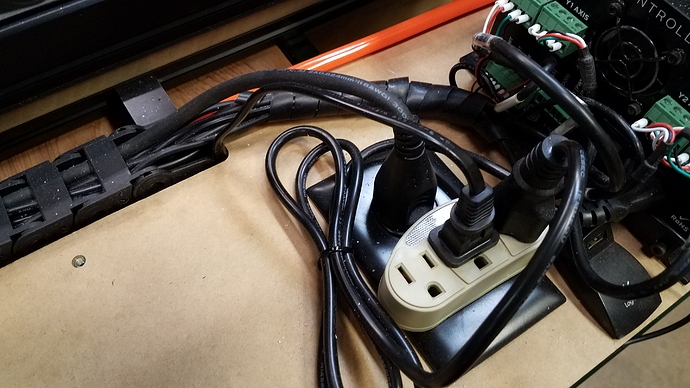 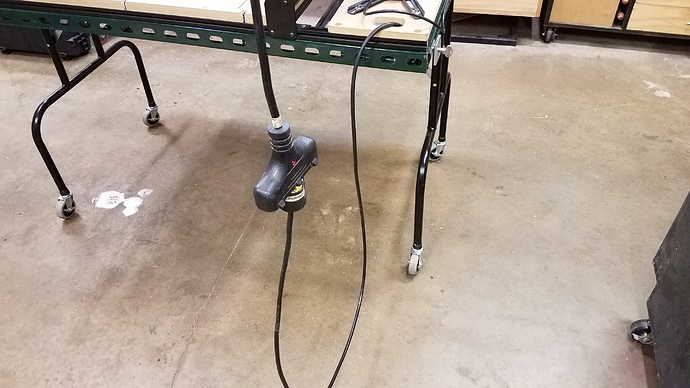 For the laptop, I got an articulating tv wall mount and an accessory tray. Remove the tv hanging part from the wall mount and replace with the accessory tray and you end up with an articulating laptop stand. Bolt it to some threaded gas pipe and a floor flange and attach to the wing. I also got another power supply for my laptop. I use this computer for some other things besides this and I wanted to be able to just put the laptop on the stand and plug it in without having to get anything else out of the bag. All the cables are ziptied nice and neat. 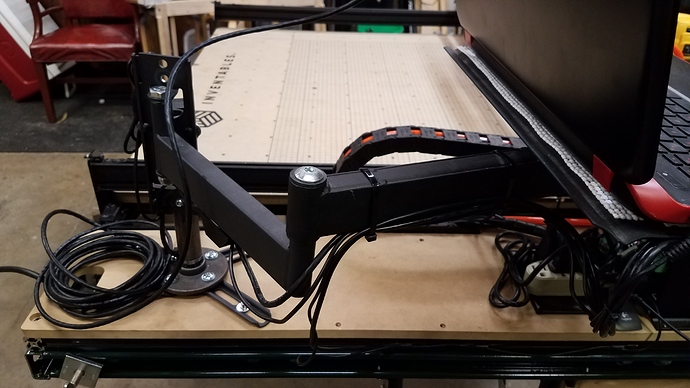 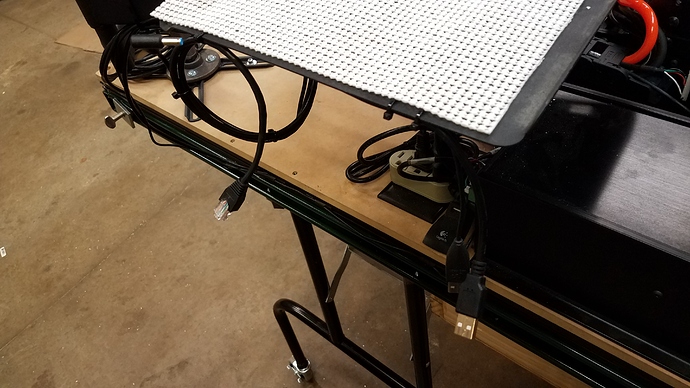 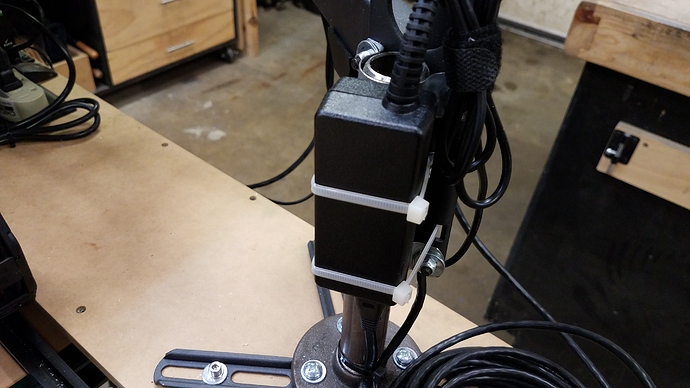 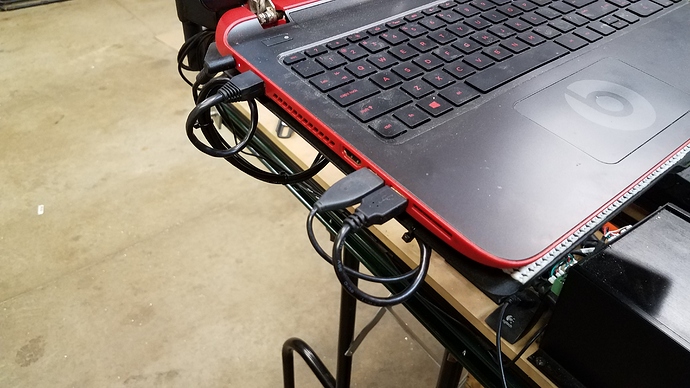 I have also plumbed in air lines. Air is the key to carving materials that melt. I have had zero issues with acrylics, both cast and extruded. The trick is getting the chips out as soon as they are cut. I got the flexible line from Grainger. It is called Loc-Line. I got some air hose and ran it through the drag chains. I added a dial valve between the supply and gauge. This lets me take my 100psi shop air and knock it down to 15-20psi for the xcarve. I have a second lever style valve that lets me turn the air on and off to the nozzle. 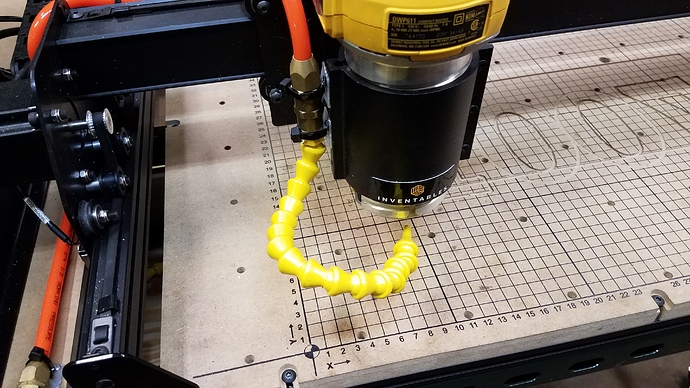 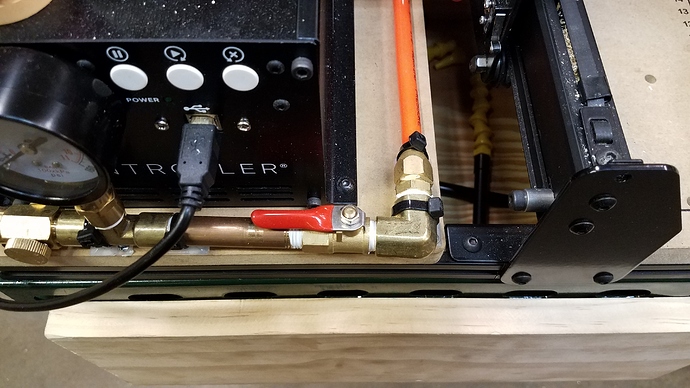 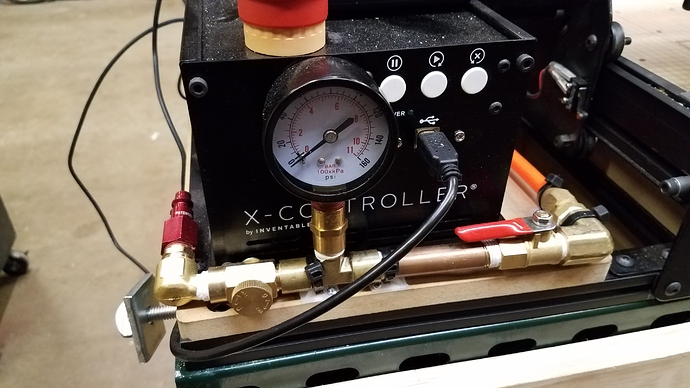 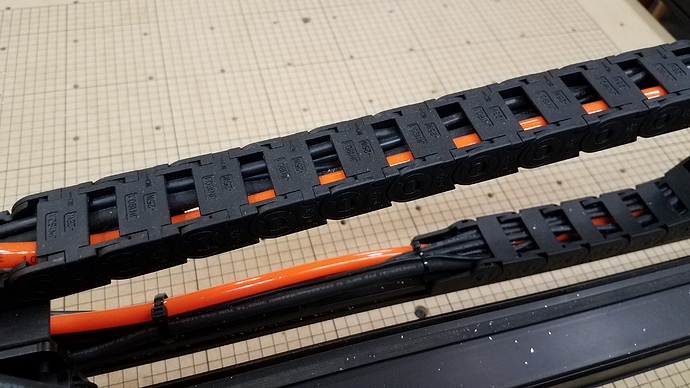 I wanted some remote control to help with setting up each job. I found a programmable keypad on Amazon. It has these clear covers over the keys so you can make your own custom key graphics. The keypad has a button to switch it from a number pad to custom programming. 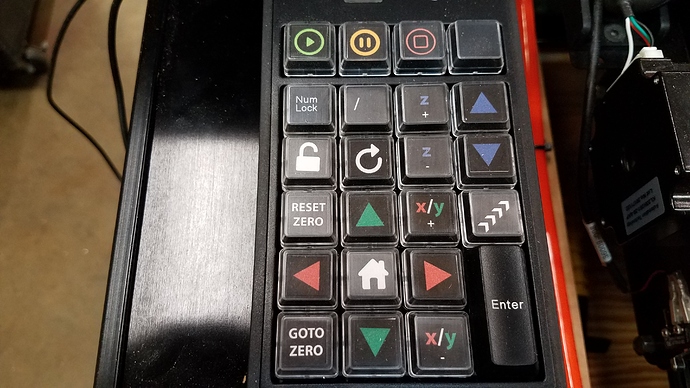 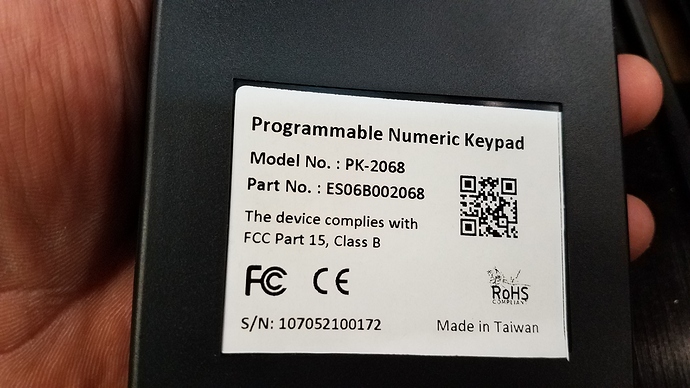 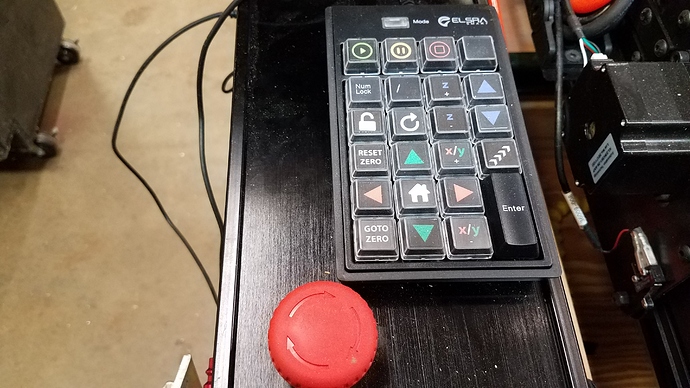 Finally, I needed storage for all the bits and other stuff so I added 2 drawers. The drawer under the xcontroller holds the keypad, excess network cable, and some extra parts for the Loc-Line. The other drawer hold all the bits, clamps, etc. 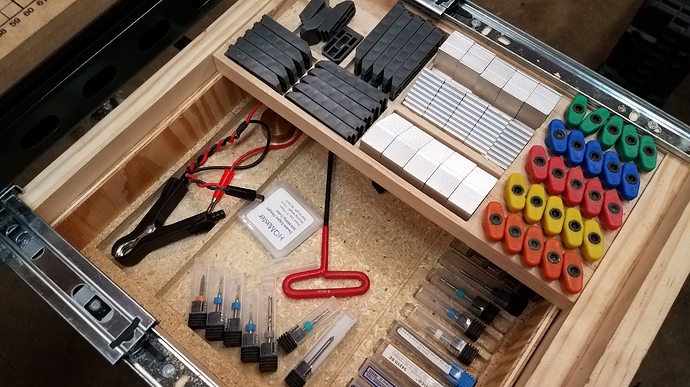 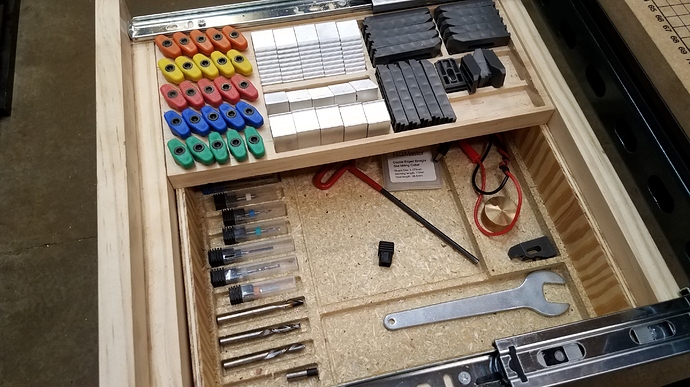 So basically, I can drop this thing down, use it, then when I am done, the whole thing packs up, and goes back up to the ceiling out of the way. I have a job booked in about a month that is going to require taking the xcarve on the road. I have a set of short legs with wheels that will let me roll the entire table into the back of my SUV and still have room for the other tools I will ned underneath.

Great write up, very clear and inspirational.
Air line for me next after reading this!

This is outstanding - awesome job!

Can you give more details on the keypad? How are you sending commands from that to the X-Controller?

I second the question from cg.
And what sender do you use Easel, UGS or other?

I am using Fusion 360 and UGS. UGS has the ability to map shortcut keys to certain functions. The keypad I got has a mode button on it. When it is lit green, it is your standard number pad. When it is lit red, the keys can be programmed to any combination of keystrokes. Say for example you used CTRL + PgUp to move the Z axis up. You can map one of the number pad keys to output CTRL +PgUp. The keys have clear plastic covers that snap on. The keypad came with this little tool to make removing those clear covers easier. I simply printed the graphics I wanted for the buttons and cut them out with a xacto knife.

Before getting this number pad, I tried a different one that was just your run of the mill usb number pad. Worked great mapping the numbers to specific machine functions in UGS…until you want to type in an actual number on the laptop keyboard. Lesson here is make sure the number pad is actually programmable.

I should also note that this programmable number pad stores the programming on its internal memory. So I can use it with any PC and it will remember its shortcuts…assuming the shortcuts are the same on both computers that is…

Here is the Amazon link to the number pad I have:
https://www.amazon.com/gp/product/B079BTFFQN/ref=oh_aui_detailpage_o00_s00?ie=UTF8&psc=1

Awesome setup and looked into something similar when designing my setup. I’m very interested in the remote and looking into it now.