I currently have the Gshield and lately its been skipping steps badly after an hour or so running( in the 2 ganged Y axis motors). I have built a smaller OX machine and used TB6600s on it. So I got 4 6600s and an Uno to replace/upgrade my X-carves Gshield. I was reading another post on here Is Easel the only software you can use with x-carve? and Zach stated the new X controller would send 4 amps to the motors resulting in more torque. My question is will the nema 23 motors that are rated for 2.8 amps handle 4 amps? I just set the dip switches on the OX’s 6600’s to 3 amps figuring that would be proper for its nema 23 motors. I thought that stepper motors always held the same current and torque increased with voltage (unlike a typical A/C motor), is this not the case? Also just to confirm the microsteps are 8 ,correct?

My question is will the nema 23 motors that are rated for 2.8 amps handle 4 amps?

Also just to confirm the microsteps are 8 ,correct?

The X-Controller has an idle current reduction feature that reduces current when they are not moving. This tends to keep them cooler. I would typically set a 2.8 motor at about 3.0 amps. Monitor the motor temperature. If the motor is hot, but not “ouch” hot you are fine. If it is consistently cooler, experiment with some higher current settings.

Phil did you end up going with a single Y driver or 2?

Larry is the 2 micro steps Z Axis correct for Acme screw? I have all the micro steps on my OX (all acme screw driven) set for 8 and havent noticed any issues.

Yes (if you don’t have issues at 8 you must have changed your steps/mm grbl). I went with two drivers for Y.

Maybe I did cant remember. I wired 2 Y axis driver myself ganging the signal wires and will swap leads on one motor. Thanks for info ,about to step out in the garage and change the z to 2 steps and see what happens for first run.

I have upgraded my system to work with the TB6600 modules.
Take Phil’s advice!
You do not need the GRBL board on the arduino once you get the modules.
Use Phil’s diagram to hook it all up.
Get 4 modules and make sure you hook them up properly.
I used a protoboard and cut it off so it would fit into the metal case where the arduino is.
I should make a new enclosure but I have not had the time yet. 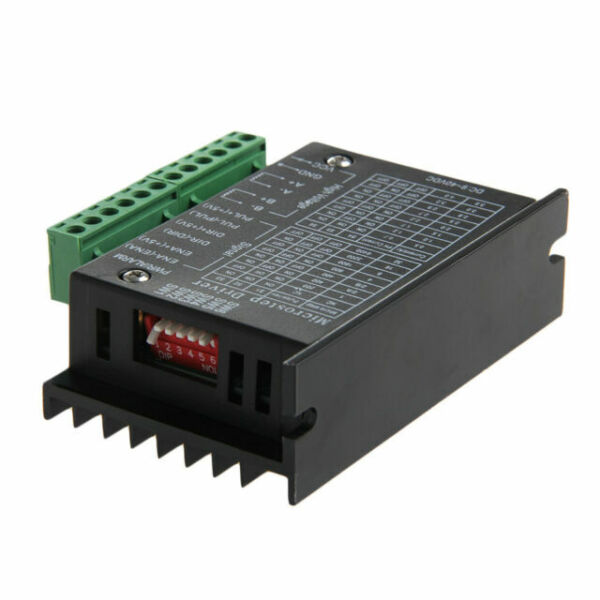 Find many great new & used options and get the best deals for Single Axis 4a Tb6600 Stepper Motor Driver Controller 9 40v Micro-step CNC J at the best online prices at eBay! Free shipping for many products!

Yea I got the same drivers. Everything is working and moving in right directions. Problem is when jogging .1 inch its moving more like .5 inch. Im guessing its in grbl settings somewhere.

Got it. It was in the GRBL settings. A few $x=val and all is well. Thanks to all you guys for your help. Now back to what I bought the machine for,carving time.

Don’t buy this cheap china crap! The symptoms are the same as shown in video.
Original TB6600 chipset cost 6$

In the video he references THB6064.
These are just the chips. I bought the module with a different chip in it.
He is doing repair on modules so this isn’t what too many here would be doing.
I have the skill level to do this sort of thing but I do not advertise it cause it takes time and people do not like paying for the time it takes to fix things.

My reply is not about change chips. I want show that’s the difference between cheep china crap and drivers with original chipsets…

Is there a tutorial?

Here is one user’s approach.
http://www.designsbyphil.com/cnc-demon-controller.html

I can help you with the connections. There is a old thread that Phil made with his setup that I followed.
It shows a schematic.
Give me some time to locate it.

Keep it simple, tackle one driver first and get it running, the remaining three simply hook up the same way

Here is a huge thread.
They talk about that driver and show images of its use and settings.

The internet has lots. (and I’m sure tutorials) Everything is labeled (unless you’re talking about using the discreet chips). Quick google search turned up this: [image] Grbl’s connections can be found on the GitHub site. [image]

Towards the bottom is a wiring image that should help you get started.
You can use the existing stepper motors. Just use shielded wires.
I had some issues with mine until I got some new shielded wires for the control signals.
You will also have to alter your settings as well and its talked about in the thread.
I did do this a couple of years ago myself but I decided to get a Gecko 540 and upgrade to Mach3.