I’m getting ready to upgrade my SO2 to 500x1000 and I’d really like to extend the X-axis. The work-surface accessibility is key. I don’t want to reach over the Y-axis to bolt materials down. Also, I have 2x Nema23’s driving the X-axis rail up and down the Y-axis versus just 1x Nema23 traversing the X-axis. So I’ve been investigating the options of stiffening the X-axis…

I appreciate all the ingenuity out there, and I’ll probably end up sandwiching a piece of steel stock between the rails. Or…once the guys at Shapeoko release the Shapeoko3, I might use some of their new one-piece extrusion. That might add extra cost for upgrading the gantry, though.

What I would really love to see is a pair of dogbone-profile extrusions that could slide right into the slots on the inner surface of the markerslide. If the tolerance was right, they’d be mated/stiffened! If there were loose-fit, bolts could be run vertically between the dog-bones to tighten and clamp the makerslide together.

I have never looked into designing/commisioning extrusion. Anyone have any ideas?

This might sound like a weird suggestion…but what about clamping the two extrusions together, taping the exterior surfaces to prevent bleedout, standing vertical, and pouring in a fairly viscous 2-part structural epoxy like System 3 T88 down the ‘dogbone’ channel? You’d have to mix a couple small batches to fill a meter or so…

You might even try a little mold release compound rubbed into the grooves first so the epoxy cures into your desired mating shape but doesn’t really ‘bond’ to the metal. So you could slide it out later.

I have never tried anything like this tbh … just thinking ‘out loud’ so to speak.

When I upgraded to 500x1000 I went with 6 of these across the x axis http://www.thingiverse.com/thing:503437 I used a small piece of steel to tap them down in to the groove and focused on supporting the center area. A manual inspection with and without these, trying to rotate or flex the extrusion manually seamed to make a significant difference. The two pieces feel as rigid as a single extrusion now. But I’m not an expert in this area so take my experience with a grain of salt.

That sounds like a great idea! Were they printed solid? Maybe I coul make a mold and cast them in epoxy.

AlexDenton, I printed mine at 50% infill because they are a real tight fit in the extrusion’s slotted channel and I wanted to make sure they didn’t crack while tapping them in. routing out a mold and casting them is an awesome idea, I’d love to see how that turns out.

@BillChapman have you had the chance to give the 3D printed model a good test to see what kind of difference it makes?

@Zach_Kaplan I’ve been cutting with it in place for several months and haven’t experienced any issues with rotation around the x axis. But I have mostly been milling soft woods and acrylic. I could give some aluminum a shot and see how it performs maybe. Unfortunately I’ve never really cut much without them in place on the 1000 mm makerslide to compare the experience. I ran it for about a week just to dial it in after upgrading the width and the motors before I put them in. The only real evidence I have that it helps is the feel of it once those pieces were inserted. It felt like a single extrusion and where I could manually feel the play around the x axis by trying to wiggle the z axis before adding the stiffeners, it felt signifcantly stiffer afterwards. I’ve never really had issues with rotation or flex on the x axis and I added these because it was a basically free and simple upgrade to try.

I wanna know too!

@DavidSohlstrom did some work on this very issue and talked about it in this post. I’ll be making the same mod to mine.

Could some one measure the gap between the makerslides on the X axis. I am thinking of sandwiching a piece of steel flat bar between then and make it tall enough to just clear the top of the carrage and drop down and just clear the bottom on the carraage. Thank you Dave

I think the problem is the sheer strength of the two extrusion assembly, so slight differences in force on the two ends of the gantry will make it twist around the Z axis, and the downward force of the spindle will make it twist around the X axis. None of these solutions seem like they would really address these kinds of twisting. Because the assembly is made of two pieces, it is really easy for it to do the parallelogram kind of thing.

I’m wondering if just bolting the two extrusions together, with a precision milled spacer on the bolt between the two extrusions would work. You could even use a spring instead of a spacer to keep a bit of tension on the v-wheels. There isn’t a lot of clearance between the side of the rail and the z carriage. You would have to countersink the bolt head, and mill a little hex on the other side to hold the nut.

I think @DavidSohlstrom’s solution is basically doing the same thing, or am I missing something? A spacer between the two extrusions , holes drilled through and 12 bolts holding everything together. Dave didn’t mill the spacer to thickness (4.15mm) but went with slightly thicker material (5mm) and used slightly thinner washers on the v-wheels to correct for the .85mm difference.

Dave posted a PDF with a 3d-view drawing of how the assembly looks with the gantry. Are you thinking of something different Chris?

For mine, I had a spacer milled down to 4.15mm from 6mm tool plate aluminum (mic6) by a friend with a large cnc mill. The guy who did the milling for me thinks we could tig weld everything together too but I haven’t done that yet. I might because then I don’t need to worry about bolting everything together and I think things would be a lot stiffer.

There are only 6 5mm bolts holding things together. There are 12 6mm dowel pins that fit into the 2 slots in the maker slide when it is back to back for the X axis.

If you TIG weld yours together you will have to plan your weld sequence very carefully to make sure you do not wind up with a warped X axis. Post photos of it if you do TIG weld it.

I will NOT be doing the welding, for fear of it looking like a pretzel

The guy that would do the welding runs an exotic car repair shop here in San Diego. He has lots of fancy tools like his 5-axis CNC mill, because many of the parts for the cars he works on can’t be sourced, so he has to make
them. The people who own these cars can afford it though

He also makes custom exhaust systems for these cars out of Titanium, and the welds he does on them are a work of art by themselves.

I totally agree, an expert TIG welder can make welds that look like a robot did them they are so uniform.

Oh. I didn’t see the bolts in the CAD drawing. That sounds like it would work. I was mostly thinking that putting plastic spacers to hold the distance between the extrusions on Y would’t do much if they could still move on X.

I did some testing today. I just adjusted all of the v wheels to the lowest setting that kept the wheels from spinning freely. The a put a bit in the collet (on the 24v spindle) and a test dial indicator under the bit. The indicator isn’t clamped in place, so it isn’t the best test setup. Anyway, if I try and pull the spindle up, like the force it would have from the bit pushing into the material (although probably not as much). Anyway, I could get the indicator to move about 7 ticks, which on its scale is about 3.5 thousandths. It seems like all of that give is in the v wheels. I know the Z Axis can apply a lot more force, and that could very well get the extrusions to twist. However that easy twist you get from the v-wheels is probably going to cause more trouble. So I would be better off trying to strengthen the z axis slide assembly rather than the extrusion. 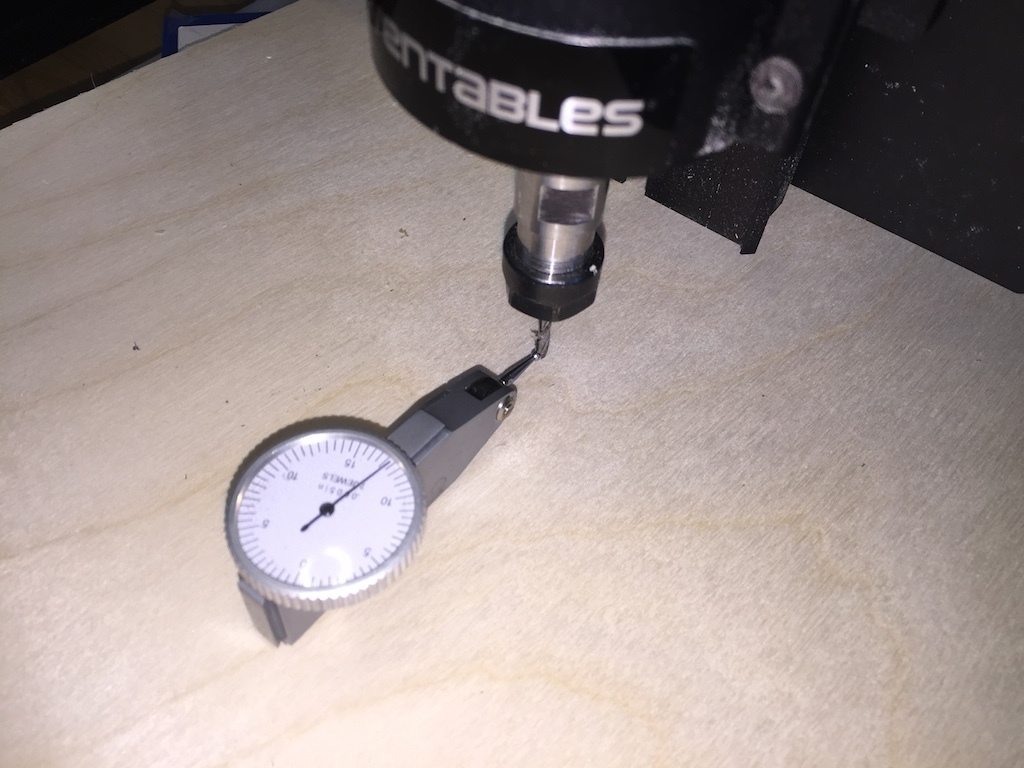 This might be a bad idea, or not, but why not cut the filler pieces from thingiverse out of something rigid on your shapeoko? If you got the drawing right, you could make them pretty long.

Cutting the pieces is a great idea. But once I could print them…it was just too easy. A bit of a tight fit, though.