I’m not sure the issue I’m having, so I uploaded photos from two different projects to show my issue. Last week my brother asked me to cut out a few sets of canvas table top easels for his girlfriend. He drew up the design, I uploaded them into Vcarve and cut them out. Only problem, it wants to “step” off the line. This is a basic cut out as well. Today I decided to give Jimmy Diresta’s stool a shot. Same problem. It’s not cutting a square, as shown in the photo. I set it up the way Diresta directed except I did slow the feed rate down from 70 to 65. Still broke an end mill. Both project used an 1/8 inch straight cut. Can someone offer some advice please?? 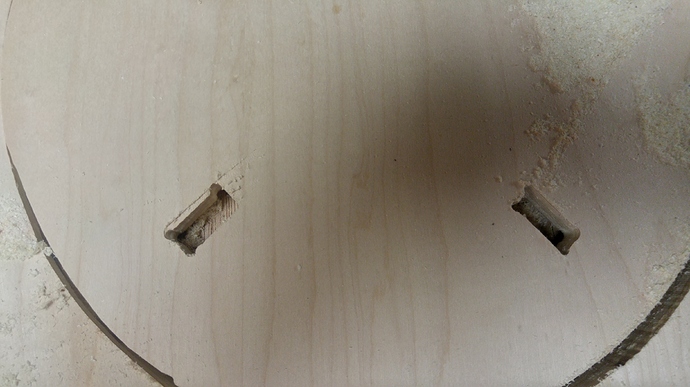 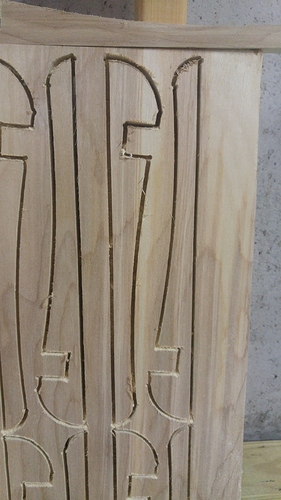 *I did realize why I possibly broke an end mill. Jimmy’s project was Baltic birch, I am using hard Maple. I forgot to change the setting.

What is the depth per pass you are using and speed on the spindle ?

.040 is what Diresta used, but I need to adjust as I used a different material. My biggest issue is the getting off track. The two rectangles pictured should he just that. The bit goes out of bounds on it.

Ok so I would start by slowing way down 40ipm do you have any stiffening mods? What spindle are you using ?
What version of the carve do you have? single x rail or double ? making sure there are no obstruction on the maker slide “caked on dust or plastic” then adjust your v wheels and your belt tension . What controller are you running ?

I see where the bit dragged on the left square on the 1st picture. Have you calibrated your steps/mm? Maybe you’re cutting way deeper than you think.

I set it at .50 thick material, when I noticed the drag I measured it to see it was .48. I’m sure that’s where that issue came in. My biggest problem is why it’s not staying on track of where it’s supposed to cut. It hasn’t happened before, my last two projects it has.

Everything that comes with xcarve is all that is used.

material thickness wouldn’t cause it to drag. Improper Z zero or incorrect steps/mm would.

Odd, if I put in a thicker material than it is that it wouldn’t drag. I’ll look into it.

The thicker material just sets cut depth for a zero on the surface or a higher retract from a wasteboard zero. Neither one would show bit dragging unless a) your steps/mm is off, b) your zero is set wrong or c) you are losing steps.