Saw a similar topic but I don’t think my answer was there. On easel my project is centered on the work piece but carves offset. It’s an oval with elements in the center. It’s also a 2 stage cut, my first attempt at a 2 stage cut. The machine has performed flawlessly until now.
I think I understand work zero vs Easel zero. Easel says my pieces are centered and I’ve zeroed the machine to the bottom left corner. I’ve done air cuts, and tried again in the back of the same board. Same results. Any thoughts? 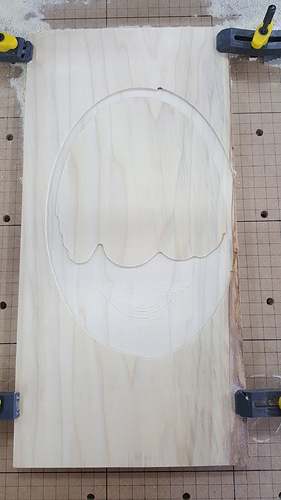 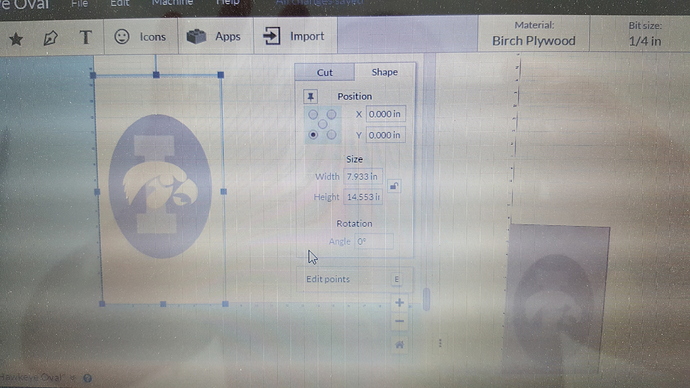 Hi Ward, can you take a picture of where your bit is positioned on the piece of material prior to clicking the carve button in Easel? Also, make sure you measured the width of your material at the narrowest point and use that measurement in Easel for the material width (looks like the material is not an exact rectangle and is wider at the bottom than in the middle and top). You may have checked all of this but I just wanted to make sure.

JEEZ! I Miss measured the work piece. I’ve only been building furniture for 20 years. Maybe I’ll catch on after a while. This faux pas is hard to admit, but their you have it. Thanks Robert.

I fixed my blunder and tried again. The piece was centered however the stage of the cut was extremely incomplete. It followed the shape as expected and didn’t go into areas where the bit would have been too large but did not clean up the large open field. There was no error message. It just said it was done, leaving a couple of different depths in the unfinished large field.

I figured what the heck and started it again. Oddly, it seemed to pick up where it left off. It cleaned up a bunch of it but still left some at the wrong depths with a few stair steps here and there. Again, no error message.

So, I decided to run the finish cut. It cleaned up some of what the rough cut missed, but did not go all of smaller cut areas to complete the project.

Just finished the single stage carve. It was incomplete as well. The shape looks right, no errant cuts, just not finished. It left weird depth variances here and there with a major island uncut except for the first round or two.

I have checked all the belts for proper tension; they seem good. I got nothin’

How do I share the project? Is that the Publisher button?

I found and used the share button. Not sure where it shared to though

I hope this is the link to my project

Disclaimer: While this is the logo of the Iowa Hawkeyes, I am not offering this for resale, but is for my own personal use

If you look at what looks like it could be the eye of the hawk, it actually supposed to be a through cut separating a couple of different pieces. It looks like maybe the bit is too big (1/16") to make the cut, but it cut it on a different attempt with a 1/8 bit.

Regarding the original attempt that left some of large field uncut, I reset the depth of the first pass to the finish depth and recarved. It cleaned it up, but I don’t know why. I would have expected it to follow the same tool path and to have left the same areas uncut. But it didn’t. 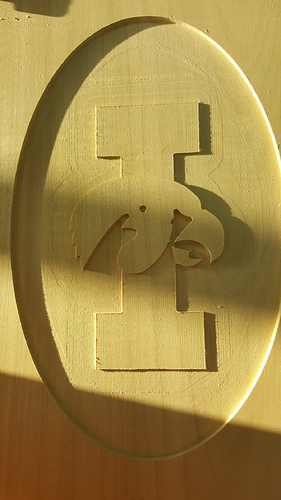 In this most recent attempt could it that the segments of the hawks head were not cut because I combined the individual parts into one to facilitate moving them around. Does Toby (that’s short or Tobor the robot) think it’s one part?