Hi all, is there a simple way to take old skool drawn plans and digitise them by scanning so they end up in a format suitable for output through x carve?
I have some drawn plans for flying model aircraft and want to carve them. What software do I need to change scanned images to a (svg?) Vector file.?

inkscape is one piece of free software that can trace a bitmap and output vectors. I’ve used it on a few pics I’ve downloaded from google images and it works pretty good for simple sketches.

Richard,
I import scanned images into TurboCad and then scale the image to the desired size (great for enlarging a model) and then manually trace the parts and all outlines. It can be time consuming but I’m not much for watching TV or anything, besides I get to spend time with the wife since she’s usually in the room either watching TV or reading.
Below is a downloaded plan I imported, resized, and have started the tracing (lines in blue) on a separate layer. Once all parts are traced I can then nest the individual parts in a new file in order to export them as an .SVG file and then use V-Carve Pro to import and produce the G-Code to cut the parts.
Yes it sounds like a lot of work but enjoyable, at least to me. 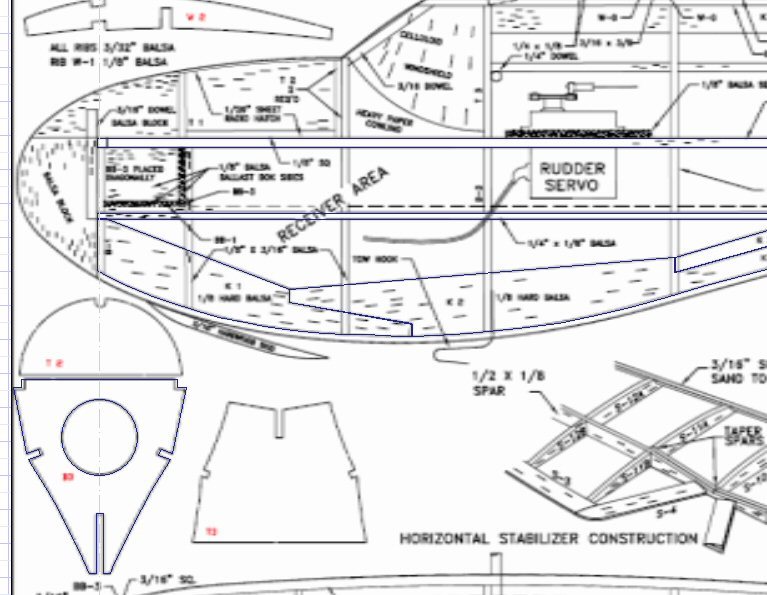 Thanks mate, does Turbocad rock on mac do you know?

Richard,
Yes Turbocad is available for Mac! Here
Me personally I have been a long time MS user and my version of Turbocad is V12 which while old is still up to the task of what I do. The newer versions have better 3D integration which I rarely delve into. The newest version for Macs is V8 but you could probably find some earlier versions on E-Bay or other retailers for less money.
The Deluxe version is good but I have the pro version which adds some different toolbars that Im not even sure I ever used

@AntonioNunez Many thanks for this, I only just saw your reply. Been looking round on eBay, and yes there seem to be quite a few earlier versions at a much more ‘reasonable’ price… I’m playing (or at least trying to play), with inkscape currently, so there is plenty for me to be getting on with for now!