I have run into an issue a few times of features overlapping in a way that makes sense to me, but apparently not Easel. If I have a partial depth feature that runs all the way to the edge of a piece that will be cut via outline, is there a good way to show Easel that the overlap is not a problem? It doesn’t matter that there is overlap, because the second feature will cut deeper than the first feature in the same area.

For example: I am making a dice tower for board gaming, and wanted to cut the two sides of the tower. Also on the inside faces of the sides are angled dado slots for the landings that will tumble the dice. 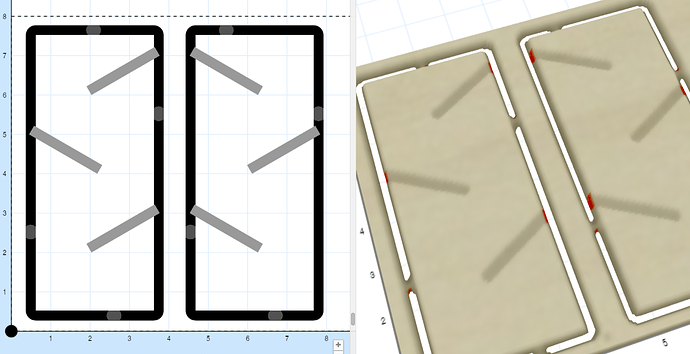 On the right you can see the red areas that exist because Easel has decided that there is a conflict, because it thinks the features are bumping up against each other. When actually whatever order the cut is done in, the overlap is done on purpose. Rather than stopping the cuts short, I am using the outline cut to give a clean edge to the dado slot.

In other instances I have performed this as two cuts (with the same bit) and bring one feature to zero depth on the first cut, then swap for the second cut. But am I missing something where that extra step isn’t needed?

Have you tried running this as is? It’s possible that the render just interprets it differently.

Try selecting the outside border cut, and use the “bring to front” in the edit menu. Does that help ? I’d also recommend trying a cut and see what you get if you haven’t already.

Bringing the borders to the front did make the preview show no more conflicts. I may try doing one side each way, to see if the cut is actually made differently or not.

When viewing the paths, it does seem like the cut may be stopped in both versions shorter than it should. 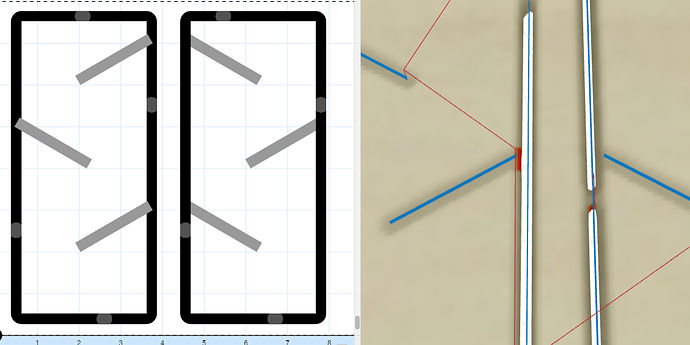 Keep us updated! I’d also love to see the final product. As someone who wants to make a few nerd gaming accessories as well, this is relevant to my interests!

Path cuts will always cut even if hidden by fill cuts. With only fill cuts can you layer and hide underlying geometry.

We fixed that behavior today, so you can now use filled shapes to block out deeper outlines—just like you always could for other fills.

I think this would fix the little bit of red in @KeithLemelin’s project, although now you’ll definitely want to use the version on the right, with the fills in the back so they don’t block out the border.

We always considered the old outline behavior to be a bug: the results didn’t match the appearance on the 2D canvas, and the 3D preview flagged the non-blocked-out cuts in red. On top of that, it was confusing & frustrating to discover—often “the hard way”—that the technique you learned for filled shapes doesn’t work with outlines.

Isnt the cutting order from front to back?

Generally, Easel’s carving order does shallower features first before deeper features, but it makes various optimizations to reduce back-and-forth travel time and to avoid moving through the same areas multiple times if the design has overlapping shapes.

If there are any nested shapes, Easel also tries to cut the inner shapes before the outer ones, so that the pieces are still supported while the cuts are made. (I can’t remember if we have this working in all cases yet, or if that’s one of the things @Ruwan is still working on.)

I have been sending the body outline to the back of the project and all seemed fine.

Why? I don’t think this ever should have been necessary, at least not for the sake of getting it carved correctly. Did it make it easier to interact with the other shapes in the design, or was there another reason to send the outlines to the back?

Does this mean I can no longer have my pockets go beyond the cutout in the same file because the cutout overlaps it?

If you want the cutout to cut through the pocket, then you’d just need to have the cutout “in front of” the pocket—like the one on the right here: