I got a paid job to make some letters for a conference logo. I used a bit with a 2 inch cutting area and pink foam from Home Depot. The letters were painted and mounted to a metal frame giving them a floating effect. I was able to cut each letter using a 2” depth per pass so the whole letter was cut in one pass. I ran the X-Carve at 220IPM. It was really fun to run it that fast. 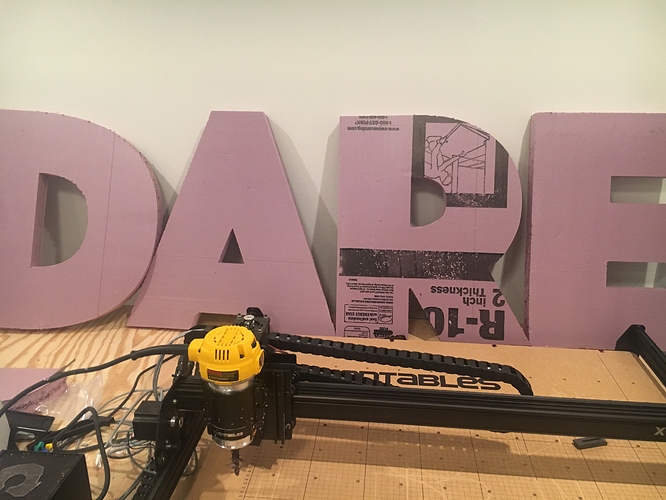 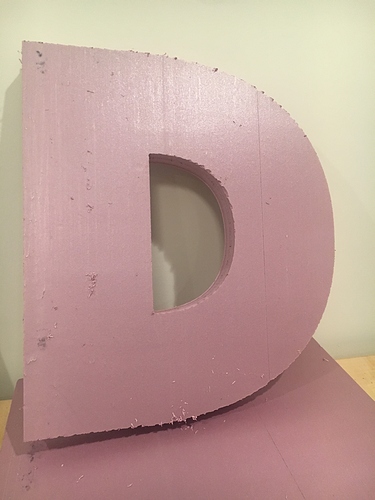 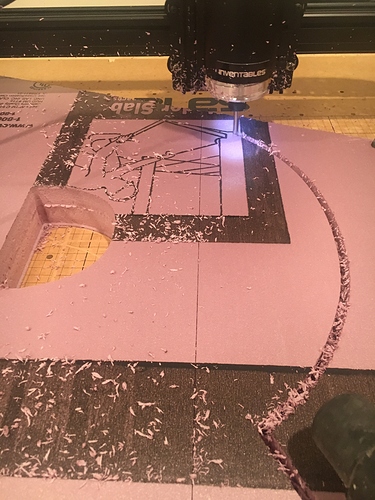 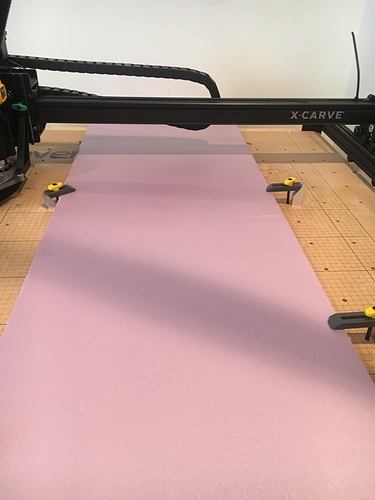 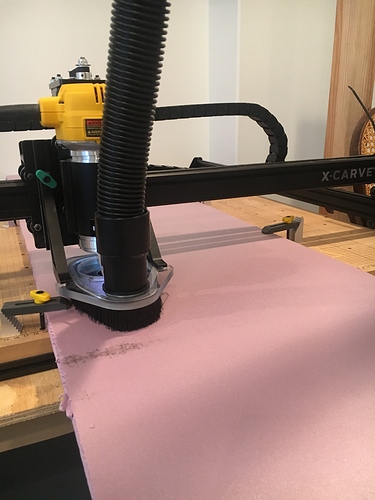 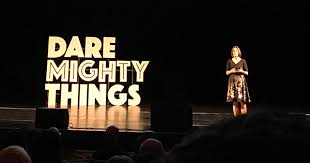 Another guy did the painting 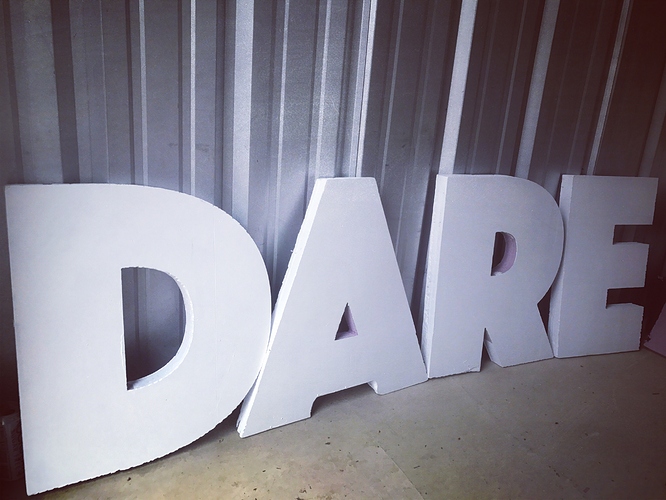 I just sent him a message to ask what kind. Here’s a picture of the painter letters in his shop.

Come to think of it @PhilJohnson is correct I used Behr indoor latex paint on a different project with the same material. I used the sample size at Home Depot. It was like $2.50 and they mix to any color in the rainbow. 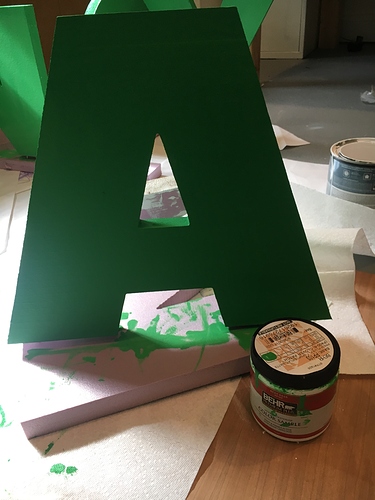 My paint guy said he used flat latex paint with a roller. He tried spray and it failed but the roller looked good.

This was one of the larger jobs I’ve been paid for.

It was pretty easy money except getting the foam back from Home Depot was a process. The only way to fit it in my vehicle was to break it on the score lines in the store.

Any water based paint to seal the foam. Then you can paint with anything you want

Funny story about that bit. I didn’t want to spend a lot of money so I dug through the bits in our makerlab at work and found a bit that was 2 inches long but had a inch of cutting area. It wasn’t designed for foam but I figured I could get away with it. I was wrong. 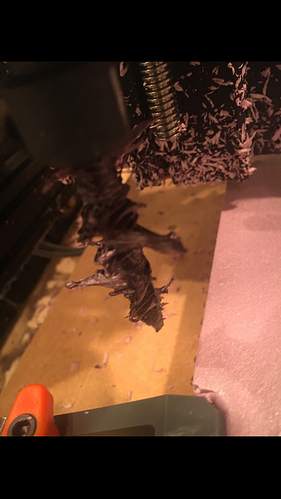 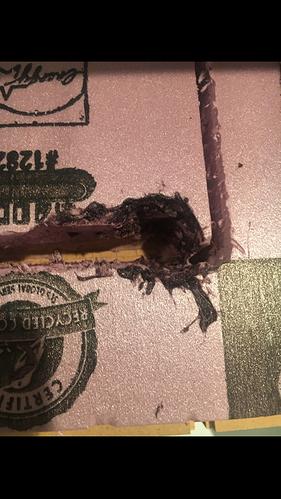 As you can see in the picture the rubbing from the bit melted the foam, clogged up the bit, the machine started going off course from the friction and build up foam molten foam and then my dust collector got caught on the clamp and I broke the acrylic piece in a large SNAP sound.

So then I went on google to find the proper bit. I searched and searched and found one that I thought would work but I MIS-red the specs and it was 2” total rather than 2” cutting length.

The next day I was telling someone at the office the story and they asked why I didn’t use this one: 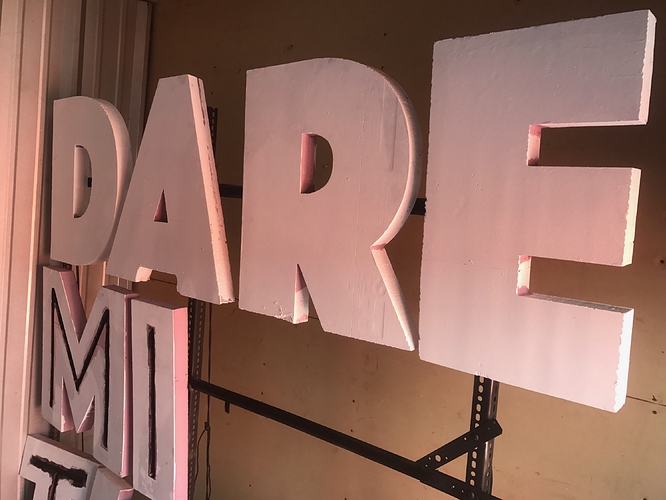 For the lighting be mounted it in a metal frame, painted it white, and pointed stage lights on it. There was no internal lighting.

There was no internal lighting.

I just returned the pink foam I ran out to purchase recently.

Why did you return it?

Sorry. Joke. I was hoping for a cool answer to how the letters were illuminated.

Ha! I saw one today where it was backlit. They mounted LEDs on the back so the LEDs lit up on the wall.

On my way back to Home Depot.

Hope you are not hauling that back and forth in your compact car.

The gas is probably costing him more than the foam.

I was hoping he was gonna say…I covered the front of each letter with EL wire panels for illumination and then covered those with equivalent-sized carved letters from the acrylic Inventables sells. In the end, glad to know the real solution was a dumbed-down and super cheap method. THAT I can afford.

Oh yea the beauty of that approach was how inexpensive it was.

@Zach_Kaplan the 220ipm at full depth seem to cut well, or would you slow it down if you did it again?

About to do a sign project for the boy. Thinking about using some pink foam since I have some and they would be light to hang. Looks like pretty clean edges from the pics.

@PhillipDanner it cut very well and if I had to do it again I’d try speeding it up to 300ipm.

Each letter only took about 1 minute so it might be unnecessary to change the settings.