I am trying some things with PCB engraving. The result is not good, as you see, but I already all the problems sorted out.
Except one. Why are my round pads not round? And my lines not even in thickness.
There seems to be some give that’s making the bit wander off slightly…

Did you calibrate you machine?

yeah but I have a theory.

I used double sided tape instead of the usual clamping. It the thick foamy kind. I think that’s the culprit of the minimal give that I have.

At least that would make a lot of sense… I’ll know for sure after the weekend when I do another test with clamps.

Very nice Wheatstone bridge. Interested in the resolution you get when flexing that plate.

When doing circuit boards the boards are not perfectly flat. meaning that the surface can be up to 1mm higher or lower than other areas.
What you can do is measure the thickness in several areas to get an idea of the tolerance.
Chillipeppr will do this using the probe and it samples several areas in a grid and adjust the gcode to compensate for this height changes.
I would use something like this for PCB’s.
http://chilipeppr.com/

Not a wheatstone bridge

Don’t even know what that is hehe

The prints are for this handheld console I’m building:
http://www.manmademayhem.com/?p=264

For a second attempt I clamped the board. Still wandering toolpaths though… Don’t know why, but honestly I don’t care, it is 100% functional, which is the only thing I need. 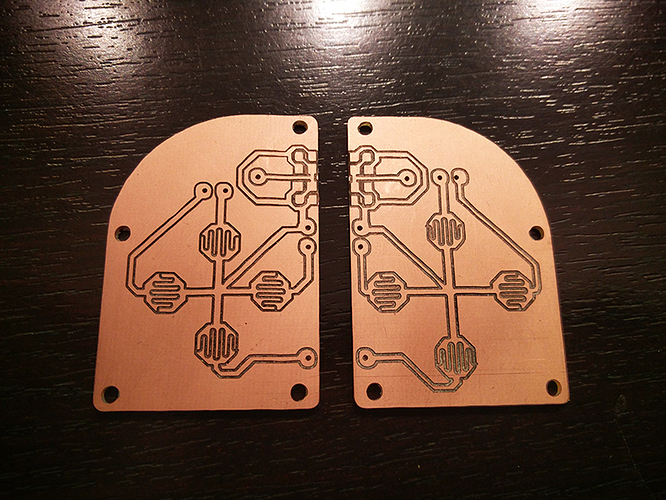