As I have been rewiring my X-Carve with new stepper cables, I have been replacing the crimp ring connectors with new ones. The original connectors I used were standard ones from Amazon and home depot. They are the “red” category which means 18-22 AWG, and have a #10 ring. They are made of tin plated something (I’m guessing some copper alloy), and have a red plastic collar around them for insulation.

These connectors are terrible if your goal is to create a durable electrical connection. The only thing holding them together is the force of the copper crimped down on the wire. Any kind of stress will make that come loose. There is nothing holding the insulation in place, and once it is deformed by the crimping operation, it will just fall off at some later point and slide down the wire. In addition there is nothing to stop the wire from going all the way through the connector and comming out on the other side. So often when crimping these one you get the connector in place, and crimp it, but in the space of time between placing the connector and crimping, it slides down the wire.

When I took apart my connections on the stepper motors, I found a number of failed connections. Most of them were insulation that had fallen off, some had loose connectors, and in one case the connector just fell off as soon as I removed the screw on the terminal block. (see the pictures below) 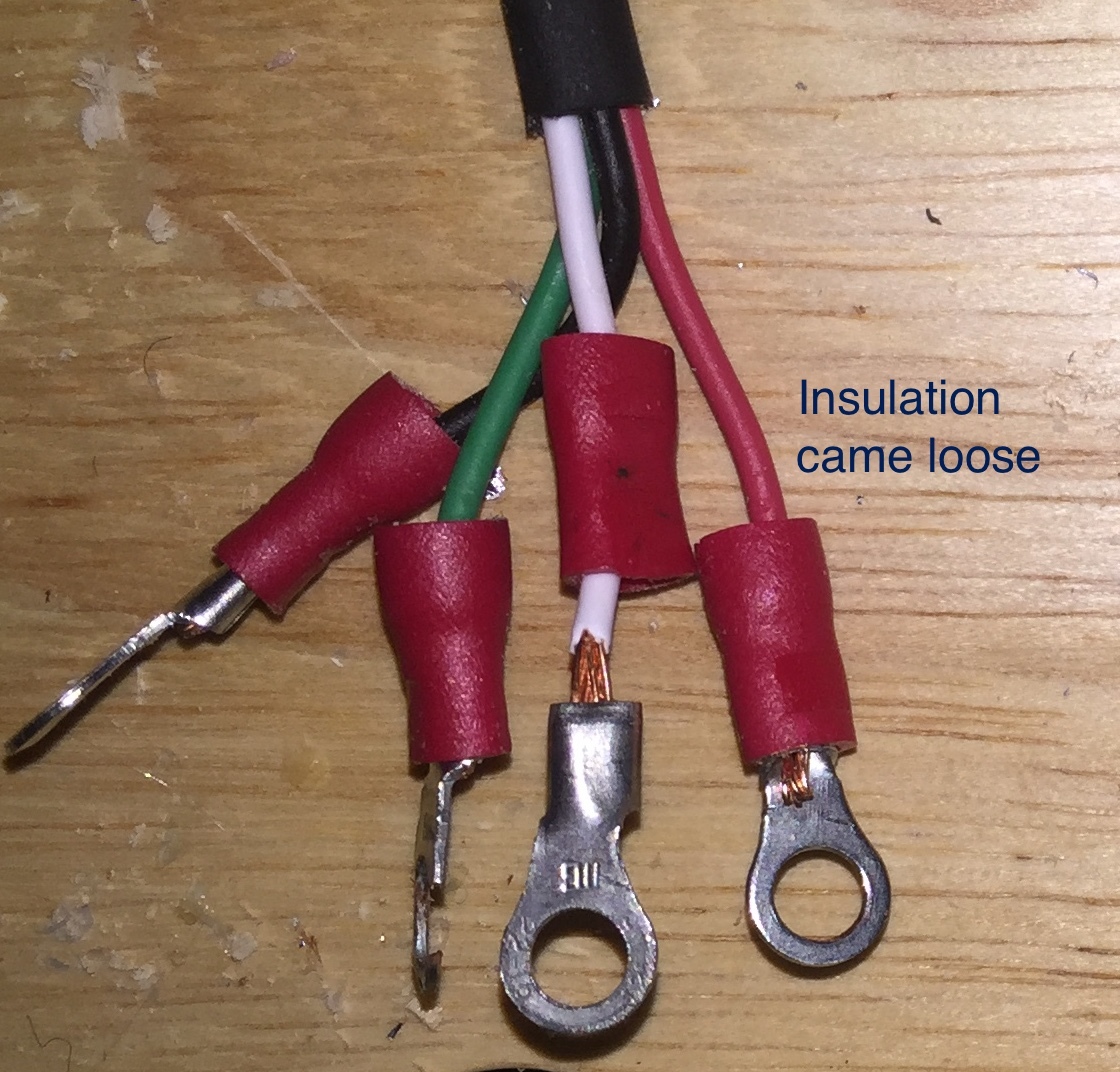 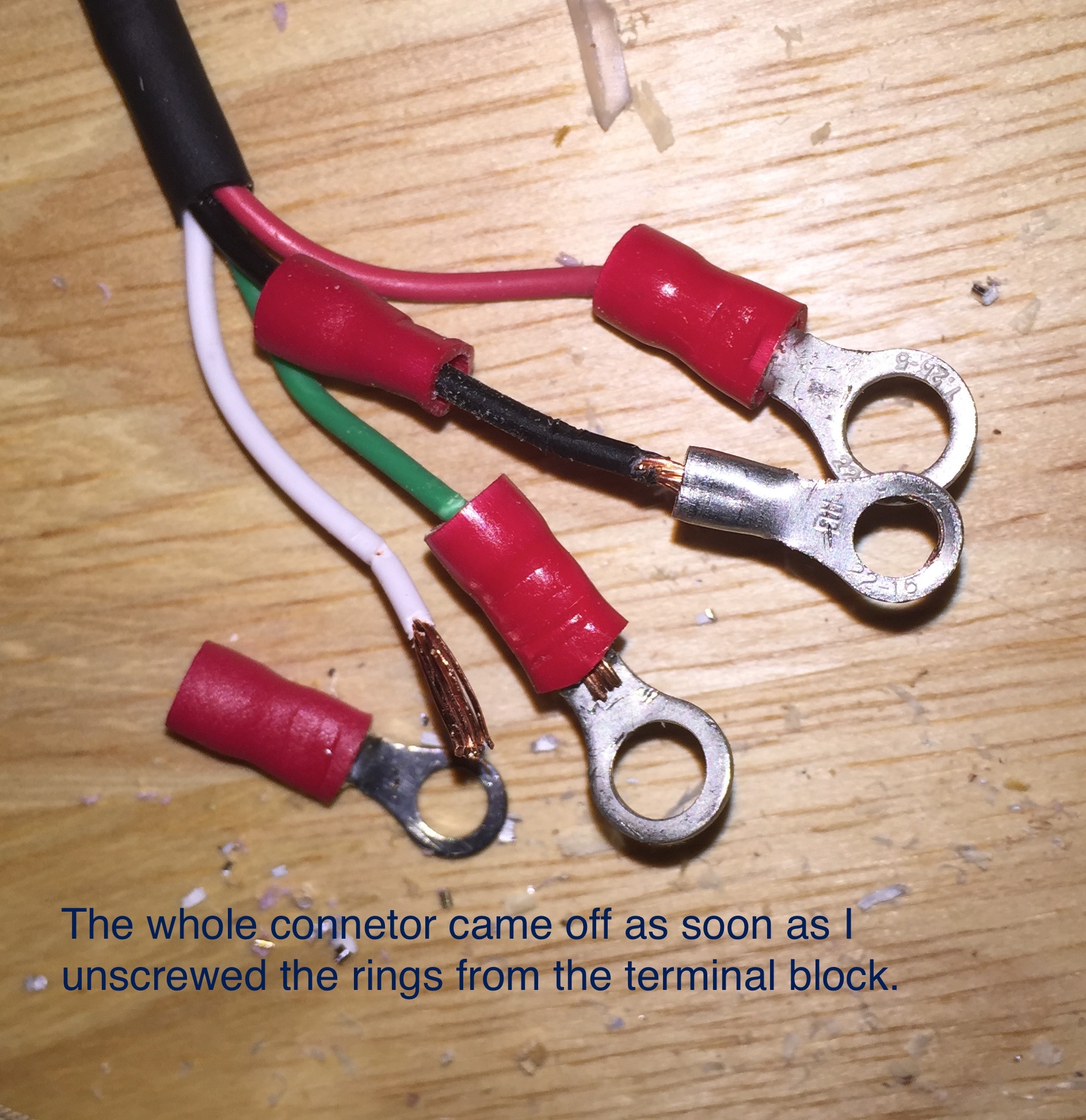 I’ve been replacing these with heat shrink / adhesive connectors I got from ebay. I think they are about $7 for 25, so they are a bit more expensive, but not crazy. The adhesive on these didn’t seem to have much affect (or maybe these have no adhesive, they didn’t have a datasheet), so I stuck a tiny sliver of glue gun stick in each collar before applying heat. They also take more heat than typical heat shrink. I ended up using 400 degrees. But you get a super strong connection that bonds the collar to the wire insulation. Here are a couple of pictures.

Before heat is applied. Notice the tiny piece of hot glue I stuck in there. It is just a tiny piece I shaved off the stick with an exacto knife. 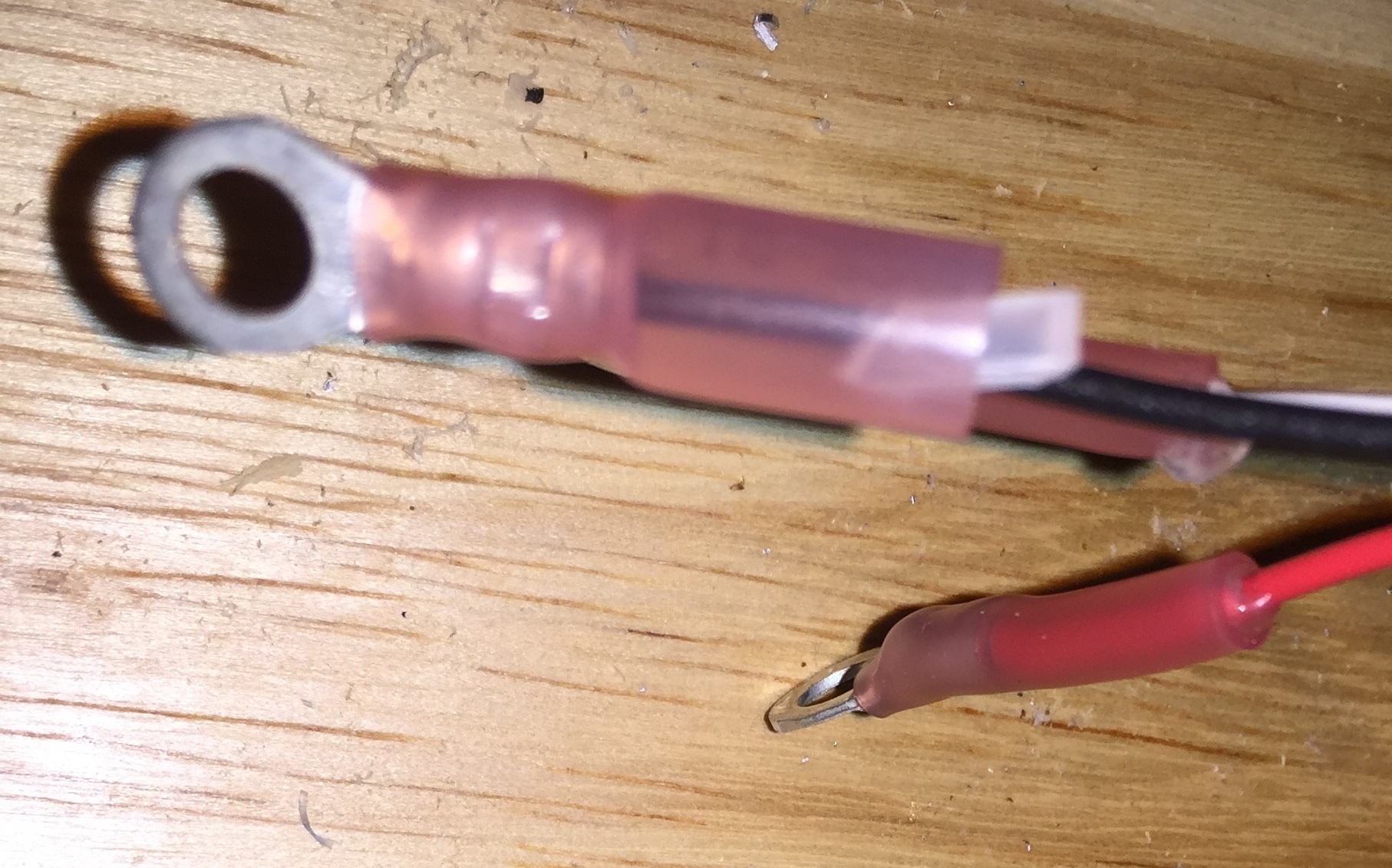 After heat is applied. 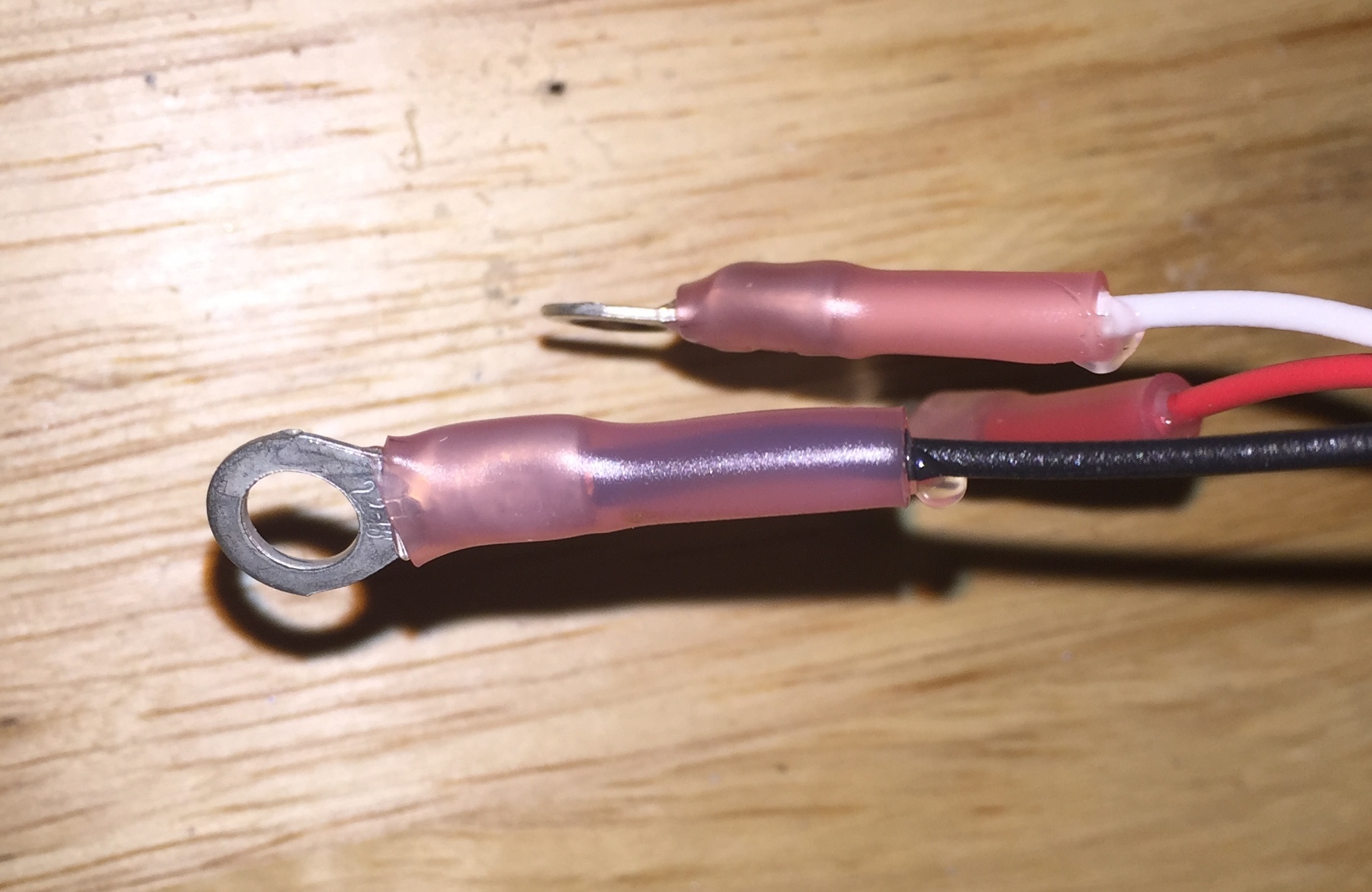 Anyway, I highly recommend that anyone planning to use ring or spade connectors gets the good ones. Don’t cheap out. Don’t go to Home Depot!

Interesting, I was going to make the comment early on when everyone started using the crimp connectors, I have yet to see a reliable one. I like direct wire connect, if something should get loose you see it right off with bare wire. The connectors look neat and nice, but not practical on moving parts.

Those look much better than the originals

I usually use the crimp connectors that come without the plastic insulator. Something like these:
http://images.maplinmedia.co.uk/maplin-uninsulated-ring-and-spade-crimp-terminal-eyelet-32mm.jpg?w=283&h=283&r=4&o=CVVKinw@pZdAT$Z1bxEhSjdHk54j&V=E2eb

I crimp the wire in place, and depending on the application, I’ll flow a bit of solder on the crimp. Then I just cover it with a piece of heatshrink tubing.

A proper crimp tool is just as important.

I did mine this way, took a little time but works/looks great!

Hear hear. A proper crimp job with a proper crimp tool, will result in mechanically sound and aesthetically pleasing connections.

I used the similar red connectors in the forked variety and with the proper crimp they hold as good as a soldered joint. The crimper I use is for uninsulated connectors but when used on these it not only crimps the metal connector properly, it also tightens down the red insulator so it doesn’t move. 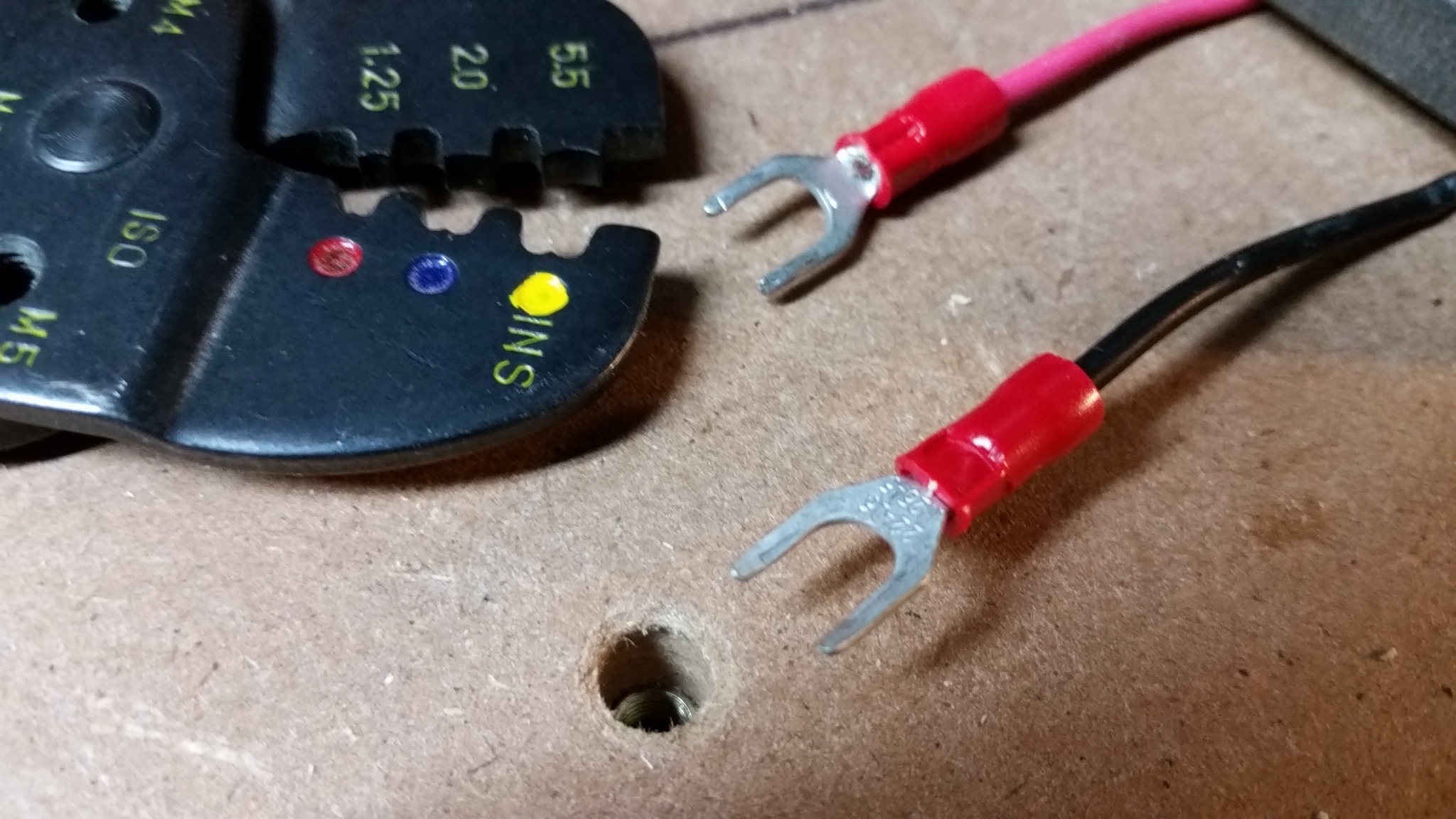 Yeah I have had enough crimp connectors fail on me over they years that I don’t trust them. Especially in any situation with movement or vibration.

For basic work I crimp them as hard as I can. That seems to make a big difference.

For areas with movement or vibration I usually remove the plastic, solder the wires into the connector and finish it with some heat shrink.

I really like the hot glue trick! I am going to start doing that.

I always flow solder into crimp connectors. Always. Especially on smaller gauge wiring projects. It only takes a second for each connection.

Agreed. I’ve been using the insulated crimper on my Irwin wire strippers (the automatic kind), which has worked OK. I would like one of those ratcheting crimpers though.

As for soldering, these connectors, at least the good ones, are designed to work without solder. Getting a good solder joint with the terminal would require you heat it enough to get the solder to flow over the terminal, not just the wire. Doing a bit of research, a 18 AWG connector (properly done) should be able to take 30 pounds of force before coming loose.

This is exactly what I do! I haven’t seen connectors without the insulator on them in the store, but I usually just remove the insulation myself.

Before we get way over our skis on this, note that high-vibration connections are never soldered, but crimped.

Wait – what? Uh-uh, as my sister would say. I have had lots of boats and other motorized equipment and many dangerous fast moving projectile like electronic projects and nothing is better than soldering. Most people just can’t solder.

Had to research this a bit. To be clear, I am talking about soldering AND crimping. I flow my solder from the terminal end, protecting the sheath and crimp but soldering the wire to the connector itself. So, apparently, the best of both worlds. The wire will NEVER pull out.

I will not deny that most people can’t solder.

Thats a good read @Earwigger… I almost always flow some solder into the crimped joint. It just makes sense to me. I should add though that most of the wire I use is military surplus, teflon coated hi-temp wire so I think it minimizes the effect of heat melting the insulation

Its amazing how good some of the wire our fine military uses. A friend of mine works on LCAC’s as a contractor for the Marines and I get much of my wire from him.

I used the cheap Home Depot crimp connectors. I only had 1 come loose, and I’ve been checking and re-checking periodically as I tweak my machine. The 1 that came loose was my fault too, as I could see that I didn’t do a good job on the crimp.

I use a decent crimp tool; I have several from different projects so I can’t recommend a brand but it’s the generic “flat” style; nothing super expensive. I always make sure to double-crimp, at both ends of the taper in the plastic insulation. Put another way, the red plastic sleeve usually has a thick part and a thinner part, with the thin part near the spade or ring and the thick part where the wire goes in. The thin part corresponds to where the crimpable part of the metal connector is, and it’s often wider than the jaws of my tool are, so I put a couple of crimps in there.

Also, I found very small connectors for the homing switches if you don’t feel like soldering them. There’s an electronics store near me that’s like a wonderland for tinkerers like me and professionals alike.
The connectors are from a company called NTE, model 76-NIFD22-110.
That stands for “Nylon Insulated Female Disconnect for 22ga wire, .110” size." I don’t know what the 76 is for.
They’re website is http://www.nteinc.com/terminals-and-connectors.php?a=27 but you have to look up the part on a .pdf sheet and I guess order over the phone. These electronics suppliers don’t like doing business online apparently.

Honestly, we use cheap crimp on connectors even in Air Force Avionics connections, the biggest thing is using the right size terminal for the wire and using the right crimper…it’s one of those things, if I had a nickel for every vise-grip pliers crimp I’ve had to re-repair…