I downloaded it.
Do I have to enter my license again?

So I ran my bottom surfacing program and when it finished the readout showed X-0, Y-0, Z-.500
I moved the Y 3.0 to get the machine away from the material.
I brought the Z down until it read zero.
I then jogged down another .010, called that my new Z-0 and re-ran the program.
Absolutely perfect…
Thank you.

And my eyes thank you for changing the color LOL…

So I’m happily cutting along and suddenly 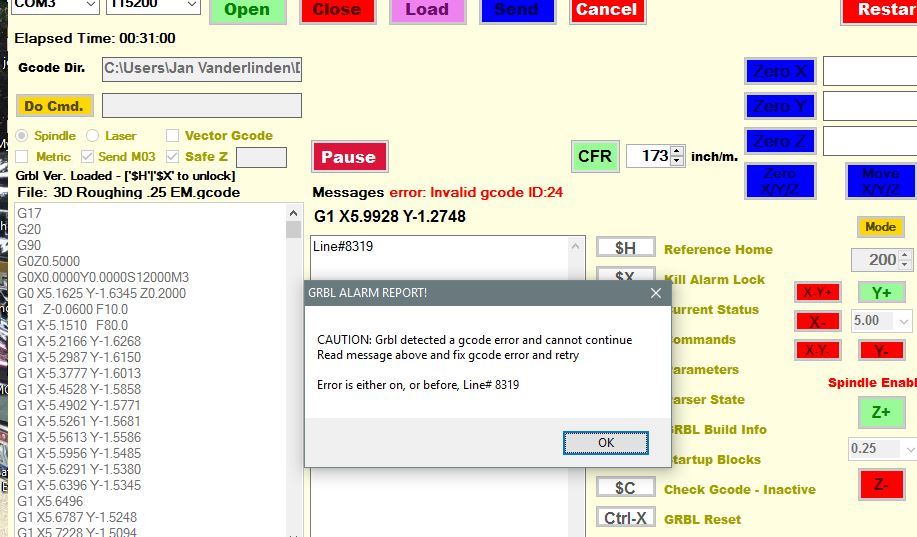 I recommend you set a Safe Z distance so if you Cancel your job, the Z will retract there before returning to the X&Y zero positions. If not, your cutter may break by plowing through the material.

What does the Vector Gcode box do?

Yes, I need to set a safe Z.
The machine did in fact stop in the material.

Yes, I need to set a safe Z. The machine did in fact stop in the material.

The Safe Z only retracts the tool when Cancel is selected while running a job . If there is a grbl error, it will just stop where it’s at and you will have to jog the tool out of the material.

What does the Vector Gcode box do?

The Vector Gcode box bypasses some proprietary code in PS used only for laser engraving images. Just leave it selected for all your spindle gcode files.

Robert,
I bought this machine in September.
I’m not smart enough in the CNC world to know what the software is.
Its the X controller.
Its supposed to be the latest and greatest ???

John,
I will leave the box checked.
Thank you.

Ok gentlemen,
So I continue to have a couple of problems (although not to the extent that I had with UGS).
I sent the screen shots to John / Jeff and they were gracious enough to send me several e-mails in an effort to help me out. (thank you vey much)
It appears that I’m loosing my USB connection, (which is not a picsender problem) but I really don’t know why and I will continue to investigate.
I have bought a new USB cable with the ferrite chokes, and a new power USB connector, with (I believe) some results.
So now (finally) the next question.
What is the $X command supposed to do?
It is my understanding that $X should simply unlock the machine, then you should be able to quickly move it to anywhere in the work envelope, and then call that X,Y,Z, zero.
All without going through the tedious $H homing cycle.
At that point you should be able to run your program. (irrespective of the “MACHINE HOME.”)
When I used UGS (with all its problems) I was able to do just that.
However, now that I’m using picsender, and I just simply unlock the machine with the $X, and then enter a move, (lets say 1 inch in Y) the machine absolutely crawls ~12 inches and then stops.
Why cant I simply unlock the machine, move to the X, Y, Z, zero of my choice and run my program?
Sorry to write a book.

Why cant I simply unlock the machine, move to the X, Y, Z, zero of my choice and run my program?

You can do that, but…

To answer your question:

When you start grbl (open the USB connection) and you do not home your machine then Machine Zero becomes the location where your spindle is when the connection is established. Throws soft limits right out the window. Can’t use them this way. A side issue.

$X unlocks the machine, but if you are going to run this way then just turn off homing and grbl will not start out in the alarm state so you don’t need $X. Also, eliminates the use of soft limits. A side issue.

Since you would like to maintain the relationship between Machine Zero and Work Zero, you need to jog your machine to the location where you want to establish Work Zero.

Many people start out this way only to discover that homing is your friend.

Larry,
Thanks for the response.
I have come to realize that you are a wealth of information and I really appreciate your help.
I will definitely try your suggestions, however it may not be for a day or two before I’m able to get back out to my shop.
How do I turn off homing?
However I DO like the fact that the machine stops and asks for me to make a decision as to what I want to do.

How do I turn off homing?

There are also two other parameters that are related to your issue.
$24 and $25 can be changed to increase/decrease the homing sequence rate.
$25 is the coarse rate of movement for the initial move to the switch
$24 is the fine rate of movement which is used to refine the position.

I have not experimented with these values so I don’t know if there is a better compromise. I just use the defaults.

I think this is more of an issue that some X-controllers were delivered with a corrupt version of 1.0c installed. Inventables did a new release just to change the 1.0c release date which I assume was for tracking purposes to tell people if they didn’t have the new date release to upgrade the firmware to the new date release.

I use an Arduino Uno (not a clone) and a gShield v5 with my SO2, and I have never personally experienced a USB disconnect when running gcode files. I have tested all of the popular Grbl releases with my setup, and currently alternate between LarryM’s 1.0c Grbl and the latest official Grbl v1.1f. I also use four Arduino Unos, each with a different Grbl version, on my software development computer, and never experienced a USB disconnect with them either (excepting those that that I stupidly caused

It is my personal belief that many of the cases reported of USB disconnects can usually be traced to one or more of the following:
1 - running the spindle ac power cords in the drag chain with a machine’s signal cables.
2 - poor, or missing, electrical noise suppression circuitry/techniques.
3 - the control computer’s settings.
4 - running other computer programs while also sending gcode to a machine.
5 - inexperienced users making changes to Grbl settings.

Unfortunately, software bugs do exist in all of the programs we use (including Grbl), and I, and other program developers, work long hours to eliminate them when discovered. I am personally embarrassed whenever a serious bug is discovered in one of my programs that causes a bad carve/engraving for my users, and I set aside my own hobby craft work until I can find a solution and issue an update.

The reports/complaints we receive about problems are often lacking in important details we need to investigate/duplicate the problems, and provide solutions to them. The help from experienced users like Jeff Woodcock, Larry Mayberry, Larry Gonshak, to name but just a few, are greatly appreciated. Without them my work would be much harder. My sincere thanks to you all, named and unnamed.

As to Grbl itself, Sonny Jeon, the chief programmer/developer, deserves far more recognition and reward for gifting all of us his time and talents as evidenced in Grbl.
John

John,
I hope that I’m not coming across as bashing the picsender program.
That is absolutely not my intent.
I will continue to use it because I have far better results than I did with UGS.
I don’t know what version of software I have in my Xcontroller.
I took delivery of it in mid October.
Maybe it needs an upgrade, but that is something that is so far over my head that There is no way that I would attempt that. (I may have to contact Inventables)
Maybe I need a new laptop.
I will try Larry’s suggestions when I get back out to my shop.
Phil,
I’m not quite understanding what you’re saying.
Can you expound?
I do appreciate everyone’s time and help efforts.

I hope that I’m not coming across as bashing the picsender program.

Thanks Jan, and absolutely you are not. You did earlier discover a rarely surfacing bug

in PicSender, and I really appreciate that. And I hope you will continue to report any other bugs you find, with any program. We all will benefit that way.

My post is just to try to get users to investigate their setups first before thinking that they have a software problem with a program others are using with no problems. Hopefully this will save us all some time. We old timers do understand the somewhat daunting task some new users are faced with when setting up a cnc machine for the first time, and are glad to offer help. I personally wish it was easier, but it is what it is. So please do not ever hesitate to ask for assistance.

I don’t know what version of software I have in my Xcontroller.

In PicSender just click on the ‘$I’ button and read the message box.

Maybe I need a new laptop.

I use old laptops on my machines, and all work good with PicSender and various Grbls. I am very doubtful your laptop itself is at fault so that it needs replaced, but it may just need some setting changed if the USB port is being disconnected by Windows to “save” power - a common occurrence.

All the best,
John

John,
I have gone into the setting and turned off the power saving feature on all 3 of the ports.
I also have it set up to never shut down while plugged in to an outlet.