So, haven’t posted here for a bit, thought I’d share my latest project! This was a collaboration with a local friend who’s son is in the local Pinewood Derby. He wanted a car on the general theme of the Mk-5 and the Batmobile. Friend did up the model in Creo, then exported a STEP file. I opened that in Fusion360 to rotate, scale and save it as a STL file, then moved that over to MeshCam V5 for programming. Sent the file with ChiliPeppr.

This was roughed with a .250 upspiral, then finished (separate files) with a .250 round-nose two flute, with two finishing passes, along the X, then along the Y, with a .050 stepover. Think it came out fairly decently! Still a lot of sanding to do (didn’t want to make it TOO easy) along with all of the assembly and tuning, but for making up a basic shape, I think I found a winner!

As always, this was my X-Controller-upgraded X-Carve, with the Suckit dust boot. I was really surprised at how well the Suckit caught the chips, even with the bit exposed most of the time. This was an excellent example of how far the bit can extend through the suckit, this was right at an inch of carving depth, and the limit was the flute length on my bits, not the dust boot or the mechanical limits of the machine. 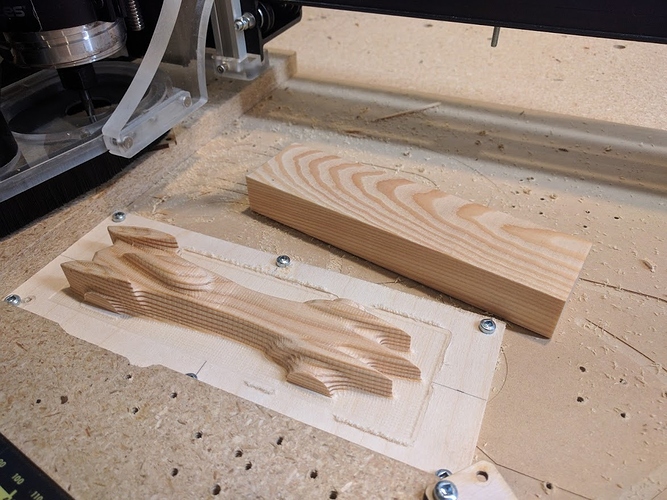 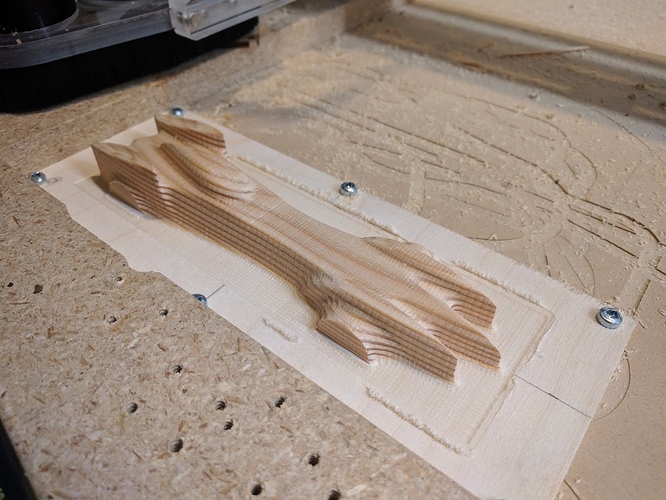 Not the best photo, my friend snapped it with poor lighting and his iPhone. But I think it gets the story across!

Also, apparently their trophy department needs an X-Carve of their own. That’s gotta’ be the single worst trophy I’ve ever seen. 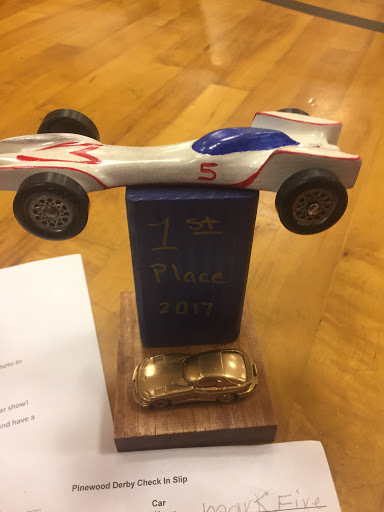 Lol. I know what you mean!

This is great! How did the one the boy did do against the other 9 year olds?

Care to share or sell the files for this?

Can you share the STL file for those of us who use Vectric?
Thanks

Sure, I’ll see if I can find that file when I get home.

Very cool. this has been on my list for a while for my nephew.

Awesome! To get the best performance out of it, the tops of the rear fins should be weighted as much as the rules allow to get the mass up as far back and as high as possible.

The top? I would have assumed the best placement would have been as close to the ground as possible.

Nope, to gather maximum potential energy, you want the weight as high and as far back as possible. Would be a awful idea in a real race car, stability and handing would suffer horribly, but those aren’t important on a pinewood derby car. Also, bend your axels VERY slightly so that only the edge of the wheel touches the ground, adjust it so only three wheels touch a flat surface when it’s sitting, and trim it to turn VERY slightly to the side that has two wheels touching. Plus polishing your axels, of course.

That minimizes friction of wheels on track, and will make the car “rail ride” on one side only, instead of wasting energy bouncing back and forth between the rails. You lose a tiny bit to the light contact friction on the one rail, but it’s a whole lot less than the repeated bounces.

ok, I was thinking of real life scenario. very different from pinewood derby 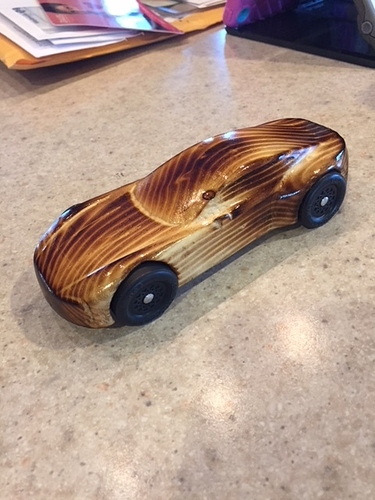