A quick search didn’t turn up anything that answered this thought.

Has anyone attempted to reconfiguring the Y axis plates and rails by flipping the makerslide to allow the gantry to ride on the inside of the rails rather than the outside? In looking at the setup of my machine it does seem like it would be possible. The only thing that looks like could cause interference would be the stepper motors being on the inside could interfere with the X axis extrusion at the extreme ends of travel. I am still running nema 17s that do look like they would actually allow the X axis extrusion to slip in the gap between the stepper motor and the X-axis rail. Nema 23 Steppers increased size may consume this additional space.

If this could work, it could provide room for additional travel for the X axis. Now, since this idea does seem like low hanging fruit, I’m sure there is someone that will enlighten me on something that I have missed in my hypothetical reconfiguration.

If I understand what you mean, then the motors would be on the inside of the axis rails which would reduce X axis travel. Perhaps I need a picture …

Yes you can, I have seen a picture of a rebuilt ShapeoKo2 like the SO3. The stepper motors were mounted on spacers on the outside of the gantry plates.

On the ShapeOko 2 you can mount the X gantry (ShapeOko2 X gantry) just behind the center where the gantry passes above the idler and belt, the X can do 330mm when carefully adjusted. The X-Carve gantry is too big to do this.

myhobby-cnc sells plates for what they call ShapeOko-X motorplatte when you drill 2 additional holes to mount the X beam 6mm further forward the SO2 X gantry will pass between the back wheel and idler. I mounted it X-Carve style and now I have 330x330mm on my 500mm ShapeOko2. I have no idea whether the one piece X gantry will do that.

Well gentlemen, I don’t often allow others to sway my actions with naysaying, but usually quite the contrary. I pulled my machine apart to do a little experimenting. My X-axis is currently riding on 500mm rails. Configured as intended, my gantry has X axis travel of 11.875 inches. This measurement is constrained by the X-axis extrusion coming into contact with the V wheels on the Y axis plates on either side.

I removed each Y axis rail and swapped them sides on the gantry. This configuration placed the makerslide on the outside of the Y Axis plates rather than on the inside as originally designed. With Nema 17 steppers, there was actually clearance enough to allow the X-Axis extrusion to slide between the Stepper motor and the X-Axis makerslide. This gap would not have the needed clearance with larger stepper motors. In this configuration, my X- Axis travel increased to 12.3125 Inches and was constrained by the X-axis extrusion coming in contact with the top of the stepper motors. If one were to relocate the stepper motors to the other side of the plates using spacers as @ErikJanssen suggested, an additional inch of travel could be gained.

Yes, gaining size is as simple as buying new parts and building bigger, but this whole thought was to gain some additional travel without having to purchase additional components. If you are using Nema 17 steppers, it would be easy to gain an additional .4375 inches of travel just by reconfiguring (may or may not be worth the effort depending on your needs). If you used spacers to relocate the stepper motors to the outside while still leaving the the rails on the outside, one could gain nearly 1.5 inches of additional travel on. For small machines, this would provide a substantial gain, for larger machines, probably not worth the effort.

With so many people here that think outside the box and the fact that this machine has evolved due to continued iterative progress, I’m surprised that this thought was greeted with criticism. Either way, it was a fun experiment for me and one that I will likely continue to toy with. 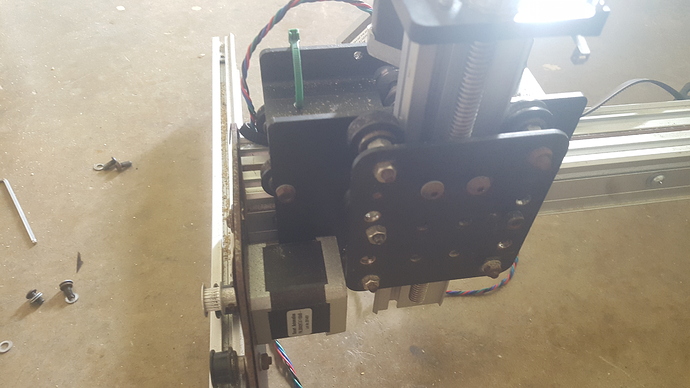 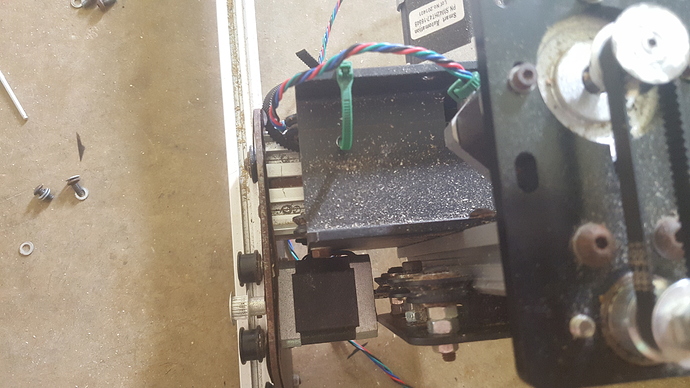 Thinking outside the box can take another direction. In my case, I wanted more travel for the gantry, so I bought enough Makerslide to lengthen it from the beginning. Simple!

The point is that you can build the machine in the way you would if you were the designer. Satisfying your creativity and outsmarting others without having to answer the question why.