So kind of time sensitive question. Finished the first part of a multi-part carving last night. Shut down the power supply to make adjustments and then could not get it to power back on. I’ve got the first version X-Carve and originally had end stops but found they kept causing issues (likely my fault) so cut them out. I’m also running a DeWalt 611 rather then the stock spindle from Inventables. So at this point basically the only thing using power from the power supply are the arduino and stepper motor drivers. I believe the issue is with the Power Supply Interface PCB, likely the switch itself as I have a spare power supply from an old 3D printer project and got the same results with it. Is it possible to just cut out the Interface PCB entirely? If so which terminals do you wire the red and black wires that feed into the stepper board?

Ideally I’d like to replace the PCB just to continue using the Inventables designed case it mounts into, but I need to get this machine up and working no later then tomorrow to finish this project so I’m in a bit of a time crunch.

Not really the point, but I’m not using Easel to carve. I divide each tool size path into its own separate gcode file. The software I use needs to be restarted after each gcode file thats run (Old version of the Universal GCODE Loader). Occasionally, as occurred last night, it won’t reconnect to the Arduino properly, which requires the power be shut off to the arduino.

Power supply appears to be fine, as does my spare. Issue appears to be related to the Power Supply Interface PCB, and the question is can this device be removed? If so, how is the stepper motor board wired directly to the power supply? 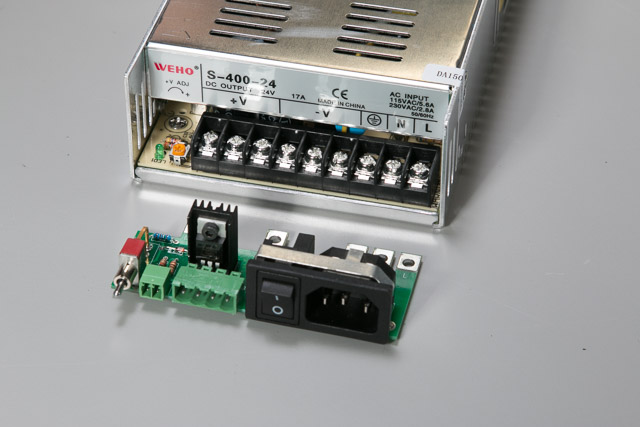 Bingo, thanks much. I simply wasn’t sure if the PCB provided any power stepping or filtering for the arduino and stepper motors and was reluctant to remove it without checking.

Essentially then the device is just a way to make the wiring ‘nicer’ and control the spindle if you have it wired that way?

The Arduino and the gShield logic is powered by the USB cable.

The power supply provides 24 DC for the gShield motor drivers.

The PCB is for convenience and to provide a switch and 24 volt PWM signal for the original spindle.

Excellent. A big help. Looks like I should be able to rig something to at least finish this carving in time then.