Preparing for my X-Carve

Just built my stand and plan to put a 2 foot flip out addition to it for laptop and other equipment. Overall table dimensions inside are 45X45X22.5. Is this a big enough area for my X-carve. Any suggestions on what else I could do to be better prepared for my X-Carve 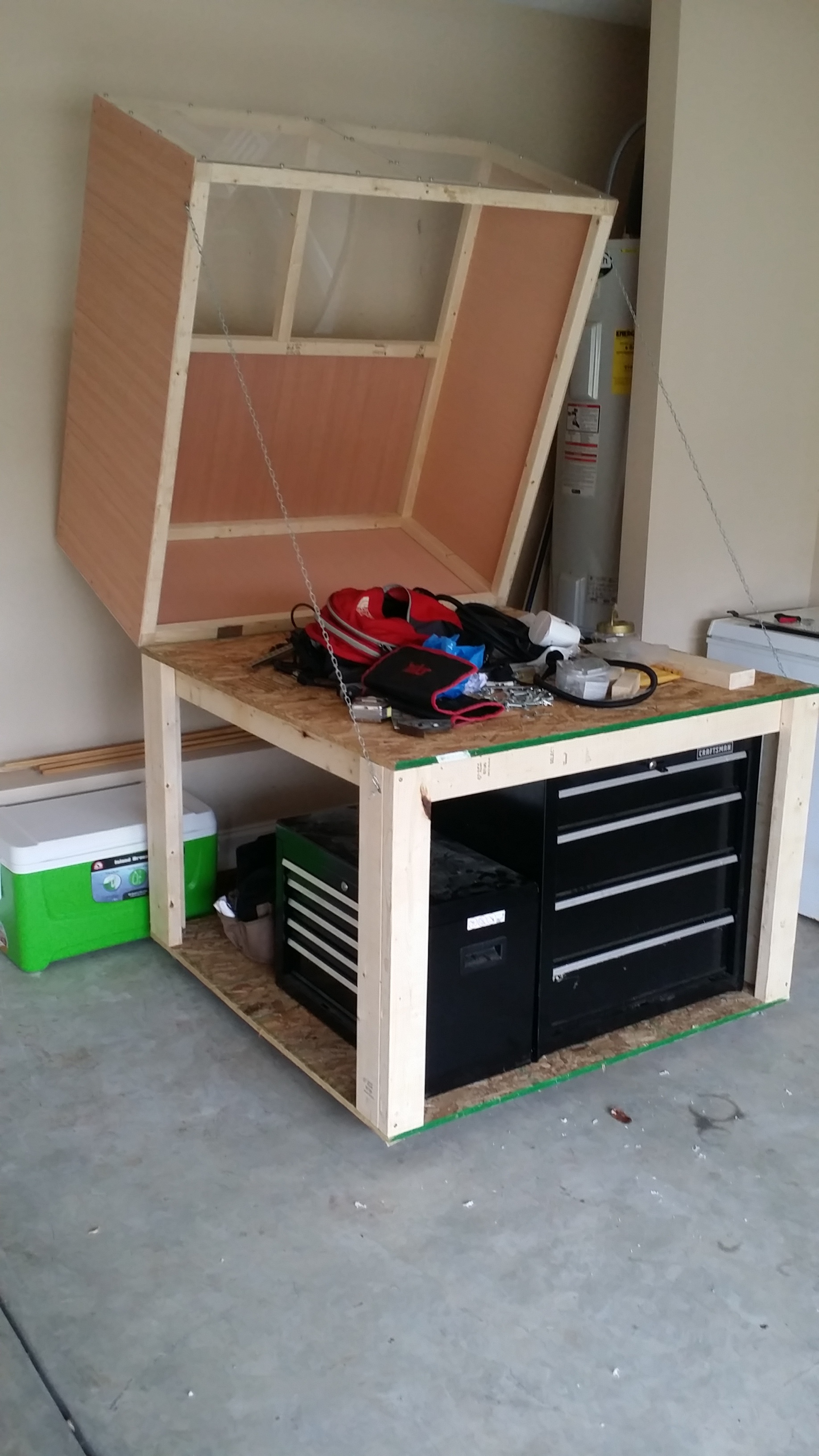 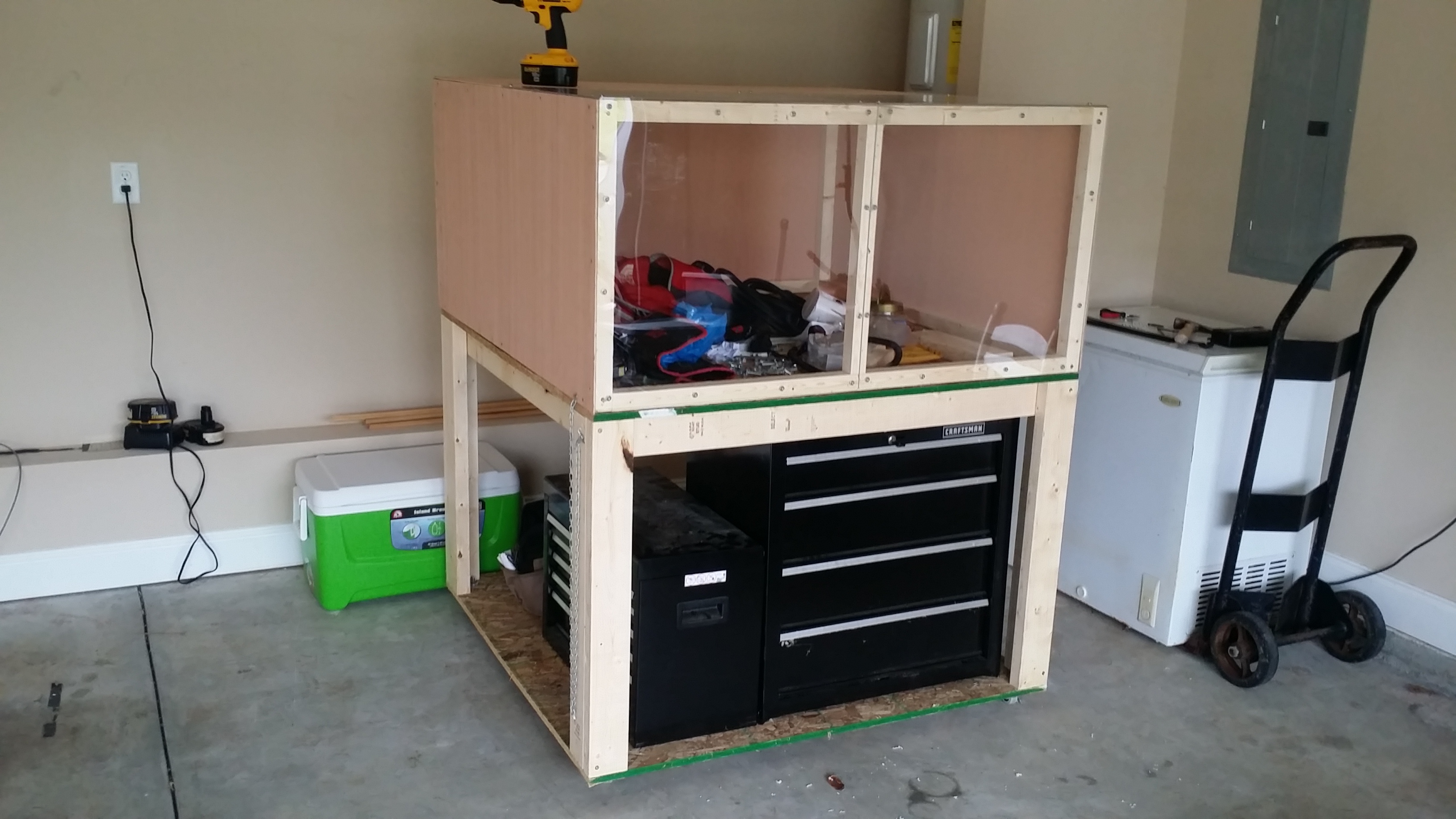 I have a very similar idea, for mine, except I will be adding drawers and an Emergency stop button to mine somewhere on top or the side of the enclosure. Good job with the enclosure though, I really like it

Have you thought about a hole for dust extraction and maybe foam panels or some sort of noise dampening?

Looks good. I built my own tabletop as an extension of an ancient Sears Craftsman metal workbench in the garage. Haven’t done an enclosure yet. Mine is pushed back further against the wall so I was thinking of fixed sides and back, and a top with piano hinges about midway along, and at the bend between the top and front face, so I can just ‘fold back’ to get interior access.
Also want to plumb in a flex line for air for a blower by the spindle, and a big intake for my air cleaner, although I’m less certain I want any eventual metal chips mixed in with my usual woodworking debris. Might have to rig up another trash can with a cyclonic top on it to at least attempt to keep them separate.

I’m not too worried about sound in the garage, besides the 1.5hp aircleaner itself is a howler.

My tabletop right now is 40x40, which might end up a little undersized…I neglected to think about a place to mount the power supply, and set a laptop (actually my Surface Pro is likely going to end up being the controller). Guess I can always undermount the electronics and pull out a drawer to set the Surface on.

Looks great! Only thing you need is a chair to watch the awesomeness. Looks like you already have the cooler.

Thanks guys for the positive feedback. I will def. Put an e-sstop in for safety…I was thinking about foam some nose isolation foam pads on the plywood walls and a foam perimeter around the bottom to seal the top. I have 3 computer fans I plan to install on the side to blow the debris off the routed item, but think I will put a tube on the opposite side that I can attach a shop vac to to pull the debris out at the same time…

I built a similar but smaller enclosure for it which has a piano hinge on top and a staionary back section so it can sit right against the wall so clearance from the wall is not needed to open it.

It also has a 4" duct connected to my 1.5hp dust collector system. While it does not catch all of the chips, it does get the super fine stuff, corrals most of the other chips and most important, it draws cool fresh air into the enclosure to keep the bosch colt router cool while in operation. 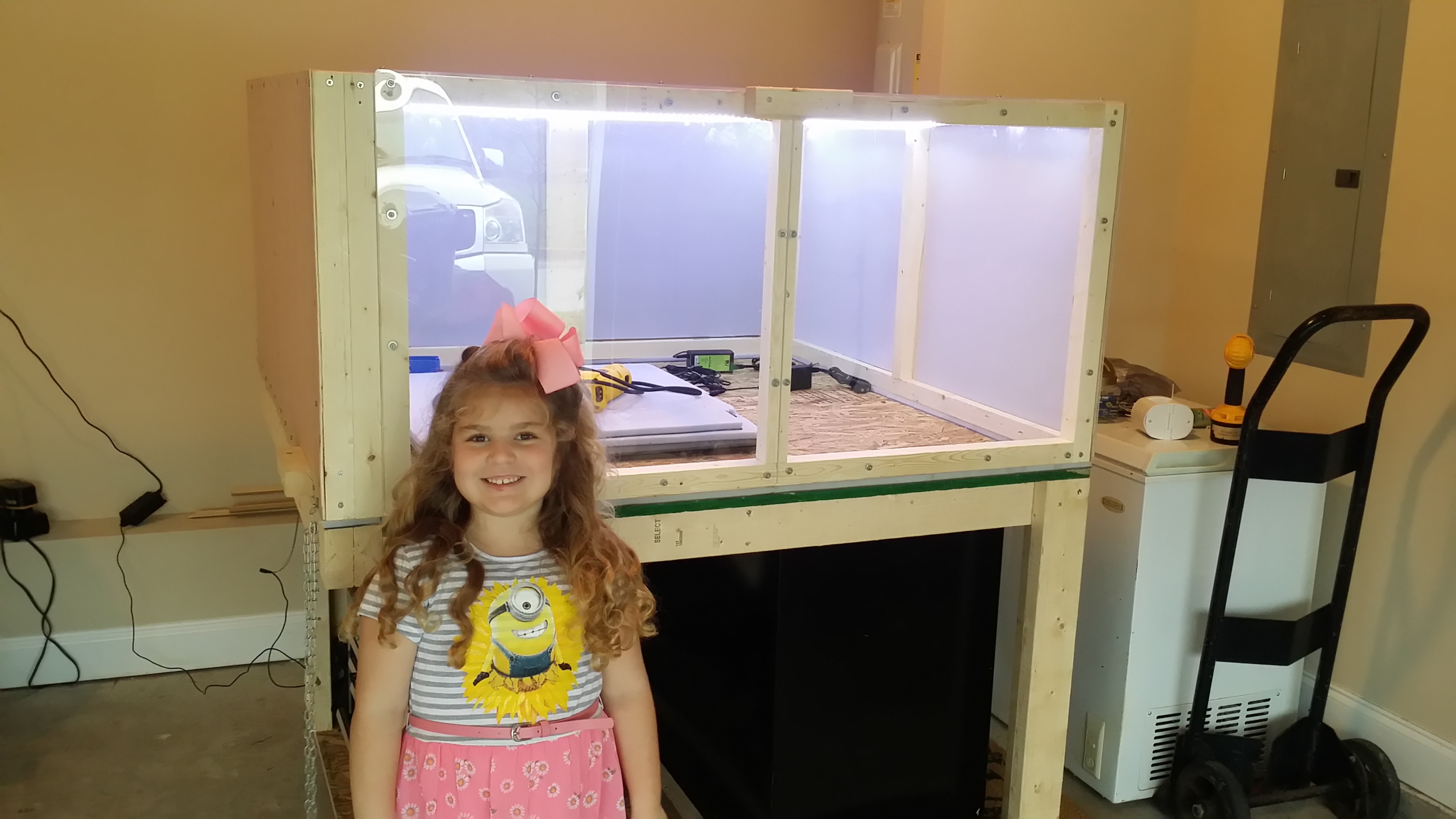 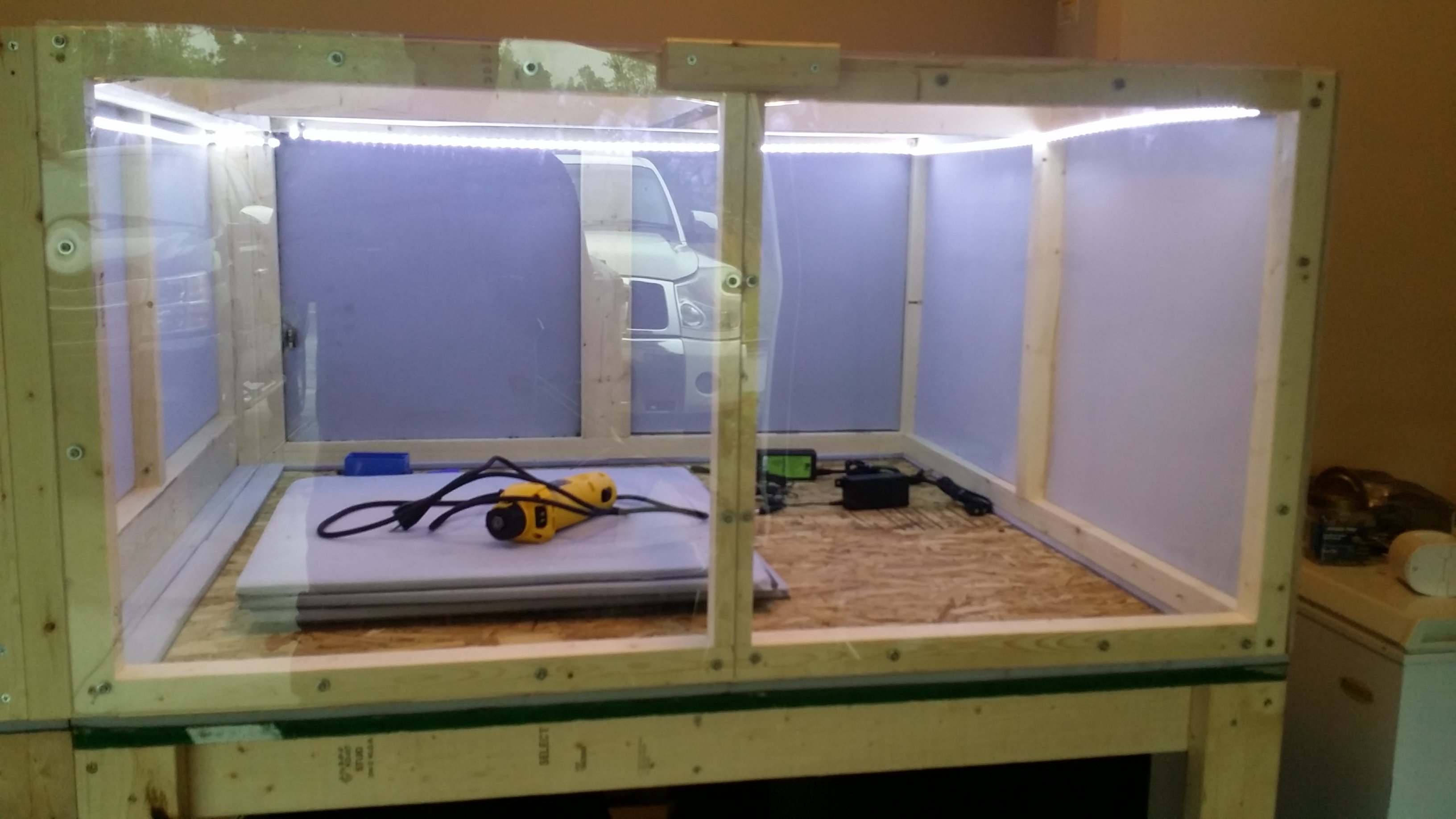 Light Mod done…jkwestphal…can you take a picture of your vac system? I’m trying to come up with mine and would like some ideas. …I got the estop and awaiting my xcarve to start running electrical…wanting to run a switch to run my vac system and cut on my router on at same time…anyone else keep the ideas flowing and feel free to show off your benches

Hey Richard…be sure to take into consideration the motors and chain guide…I made a boo boo by making my table 48x48 and my top set in 45x45…you need at least 45.5 x 40 to clear the entire machine, adjustments were easily made, but wouldn’t have been necessary if I had known ahead of time

I dont have any pics of my piranha enclosure since it has been sold and I am now waiting on my 1000 mm x-carve (Yippeeee!!!) I apologize but I didnt get back to this thread in time to take any snaps of it for you.

A little visualization on the construction of the the stationary back portion.

Above the rear legs of your table imagine a vertical seam where the front and back meet about 5 inches forward from the back of the enclosure.With a piano hinge on top,the forward part of the seam rotates forward and up as the lid opens (top, sides and front) the rear part stays in place and has a 4 1/16 hole bored through for the dust piping to connect with the bottom of the hole at tabletop level.

For the incoming air to the enclosure, the front of the cover, right behind the darling young ladies back in one of your pictures, extended out beyond the table top by about 1.5 inches creating a gap at the bottom where air would enter.

A little sawdust would occasionally escape from there but it was the heavier stuff and hit the floor directly in front of the machine.

I had a light mounted on an arm above the unit with a wooden catch to hold the cover open while i was setting up work pieces to cut but with the larger machine I think I may come up with some sort of pulley and counterweight system due to the larger size and weight of the x-carve.

I hope all of this puts images into your mind that make sense for you,