Some students at my school have created a school newspaper for the first time. During this Coronavirus disaster, I’m trying to take small positive things like this and make them into a HUGE DEAL. Anyhow, I thought it would be cool to carve the newspaper, just as it was printed into something more permenant to hang up and preserve it for the kids to see their work.
I’m having a heck of a time figuring out how to do it though, I’ve turned the PDF file into a jpg file and tried to import it - no success. I’ve tried (my best) at using Inkscape and then exporting it as a “Plain SVG” straight into Easel. I’ve also tried image trace in easel.
Short of retyping the whole newspaper, does anyone have a suggestion of how I’d go about doing this? Also, any suggestions as far as materials? All I have is Easel Pro personal and through the school - they appear to be the same thing.
Document contains school logo, some student drawings, and roughly 1 page of text.
Suggestions?

I also have the original Google Document, but using any other document program somehow messes up the layout. 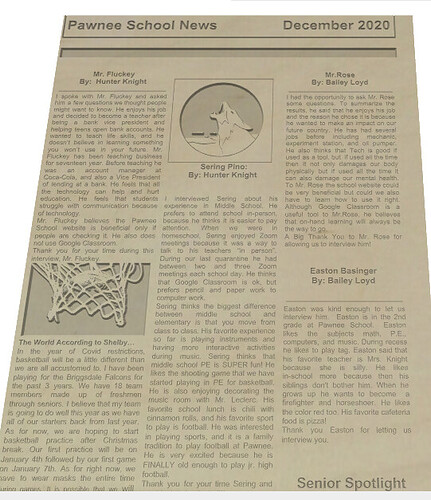 Takes a while to load and generate paths in Easel. I removed a few “borders” that could be easily added back in.

Thank you for doing that!
Is there a simple answer for How?
Also, wondering if using the same technique it’d be possible to add the second page to the first page to produce one long continuous paper instead of the front/back

Is there a simple answer for How?

Import PDF to Inkscape.
Convert all non-vector components to vectors:

Then just remove the junk.

Definitely not difficult, but I’ve seen a lot. If you’re familiar with using Inkscape for this stuff, it just takes some time.

Yeah, There’s not a lot of places smaller than or as small as our tiny little district. I really appreciate the help. I probably need to spend some time figuring out Inkscape.

So if you were to attempt this project, would you

From what I read on here, pausing has a pretty good chance of messing things up. But at the same time for a carve that’s estimated at taking over 7 hours, I wonder about the router and equipment getting too hot. Is that even a valid concern?

I can’t figure out how to get the images to trace out. Following the help from Inkscape website, I should choose Tracebitmap and then when I click ‘Update’ something should happen and a copy of the image should appear over itself at which point I’d delete the original, but I can’t get that to happen.
If I need to post these questions in a different place I can do that, but I’m having a heck of a time with this image thing.

I’d have to sit with you for a while to show you what I did. Basically it involves ungrouping and looking for weird artifacts. The top two images traced without much issue. The rest had “masks” from another program. I had to remove those. There were also rectangles everywhere on that second page. Easel will see vectors even if they are not visible in the design.
Both SVGs: newsPaper.zip (578.0 KB)
Updated Easel (same project as above). 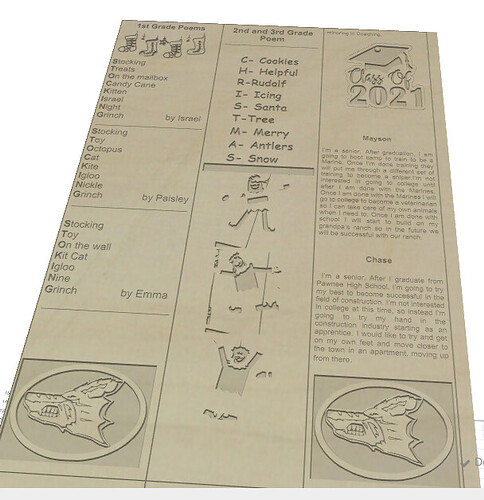 I also don’t think they’d take THAT long to carve. You should be able to do it in one pass with a 1/4 V-bit.

Neil thanks for the help on this, this is such a cool project.

Wylie if you get it carved I’d love to feature on some Inventables posts, feel free to drop it on the forum and email me at brandon@inventables.com.

Thanks Neil,
I’ll keep working. But thank you very much for your help!

Decided it’d be for the best to at least get some practice in and attempt the first carve. I’m learning I’m going to have to make this project quite a bit larger than I initially expected.
I’m beginning to wonder if I should change up my materials because there has been enough variance even in some planed wood that on the low end the bit doesn’t even touch the material as it carves. Adding a BOATLOAD of clamps helps a little, but near the center it still balloons out a little. I think by increasing the size of the carve, I’ll get more depth out of the V bit and hopefully that will help.
I’m also learning we don’t have the right kinds of scrap materials laying around to practice carves. We’re going to need to begin adding to our available materials.

This forum sure is great! Perfect little community. My short amount of time learning with the x-carve sure has been made easier with the help of this community.

Neil- you are a SERIOUSLY nice person for doing that. I hope your kindness comes back to you often

I think I’m starting to see how to make the adjustments in Inkscape. Thank you again @NeilFerreri1 for fixing them for me!
Still working, have not abandoned this project, just on pause for Christmas break!