Just completed the Pro build, which was actually quite fun.

I noticed when I did the X-axis surface planing step, it left very slight ridges (see attached picture). As an owner of the X-Carve 1000, I also experienced very slight ridges when planing on it via X axis. I’ve learned over the years that the X-Carve 1000 planes much better on the Y axis, so I re-ran the planing project with the Y raster. Same as the 1000, the Pro planed way better on Y. Smooth carve (except the front edge where it shifts X axis).

Curious if anyone else has noticed this, or if the ridges are a sign of some additional tweaking I might need to do. 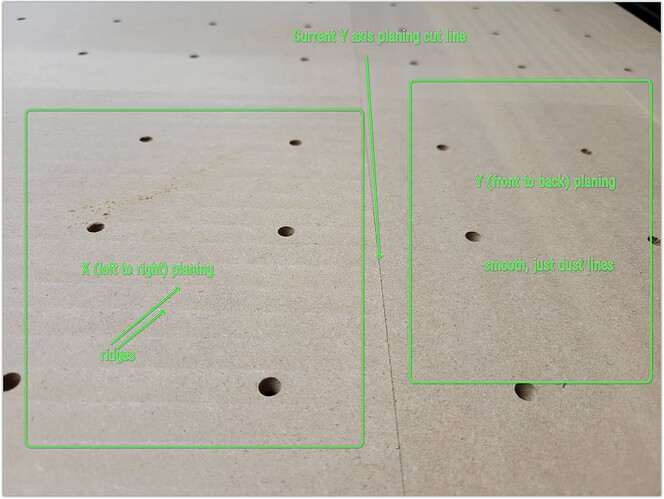 This is an indication that the Tram/Nod is off. Have you trammed the spindle? (on either machine?)

Fair point! I did tram the old machine, but to be honest, I didn’t try planing on the X axis afterwards. I knew Y worked best, so stuck with it. I have not yet trammed the pro, will give that a shot here soon.

New user here… What exactly is involved in that process?

There are many different tools that work well enough at different price points. This video shows the cheapest of those options, but on a different brand of Hobbyist CNC 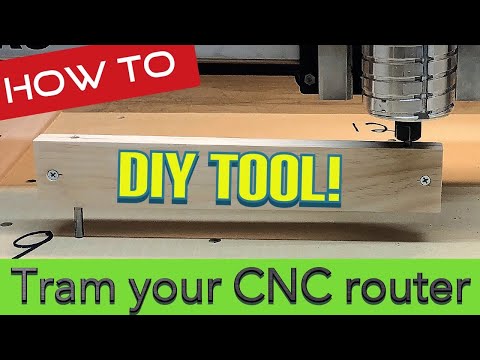 So my X tram is spot on, which is testament to Inventables’ design and build.

Y axis tram is off about 1/32 of an inch, tilted to the back. I’ve emailed support asking for some instructions on how to true it up. 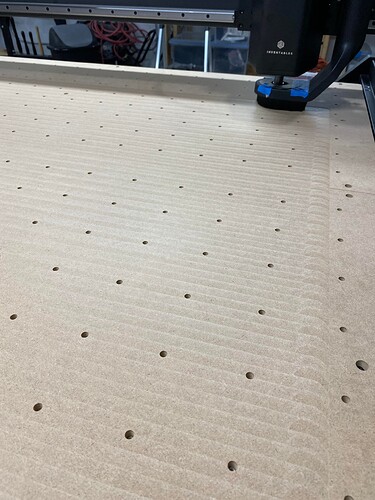 I haven’t gotten mine yet, but if any of you get information on how to adjust this from Inventables, please share it here!

I’m already learning a lot about getting this machine set up, this has been a very informative thread.

@PhilDejarnett, will definitely update when I hear back. I presume it will be loosening the six cap head screws on the sides of the gantry that bolt to the Y1 and Y2 rails, then some kind of finagling to attempt to get it straight. Maybe Inventables will have a tip for how to do this, minus the finagling.

Just another note, when I did the first planing, the instructions said to bring the bit close to the waste board. The picture they show has it not quite touching. I think in actuality they are having you do a manual Z axis zero, since using the probe with a surface planing bit it not always accurate. My first run barely touched the board except in a few areas. Once I figured that out, the second run was better (and across the Y axis).

@ChuckScott, @SethCNC , I happened to notice while I was tramming, when I would lean on the waste board it would throw off the scale. Seems even barely leaning on it adjusted the scale by a few degrees. Wondering if you have seen this. My boards appear to be screwed down completely, but maybe I should crank them a little more to be sure. If it’s not the boards warping, then the platform is not as sturdy as I would think it should be.

I’ll figure a way to shoot a video of this and post it tonight.

Can you loosen the X at the Y plates and rotate the entire thing around the X axis?

Using tram tool indicated above was able to adjust front to back plane. When I went to rerun the planing sequence in the setup with surface planing bit, the spindle stalled in the waste board… any thoughts?

@ChuckScott, when you say stalled, do you mean it caught and forced stop, or the spindle shut off on its own?

Also, I just noticed you have tape over the vac opening, does that improve the vac performance?

@NeilFerreri1, that’s what I’m thinking, but waiting for feedback from support.

I made a short video of what the tram meter looks like when I apply a little bit of pressure (may 4-5 pounds), and if I lean a little further (maybe 15-20 pounds). Not sure if this is normal. I did this video after I ensured the waste board is screwed down tight. Having to leave a dropbox link to the video, since the forum has a 15mb max limit.

Spindle bottomed out on MDF and didn’t move but continued to rotate. Seems strange not to use z probe with this part of the initial set up. For dust collection I taped a piece of cardboard over the dust shoe as a test to reduce dust which it seems to have done. Hoping to get guidance on this planing issue so I can start using this new machine. Learning curve is steep.

What’s underneath the mdf? I’ve never seen a pro.
Regardless, looks like you need to support that. Foam board insulation might do the trick.

The Pro has 5 metal crossbars that sit on 6 metal feet. The waste board screws into the crossbars. See the Pro build step pictures below.

I wonder though if I’m chasing squirrels on this, anyone else able to do my test on a Pro or XC1000? Maybe it is normal behavior. 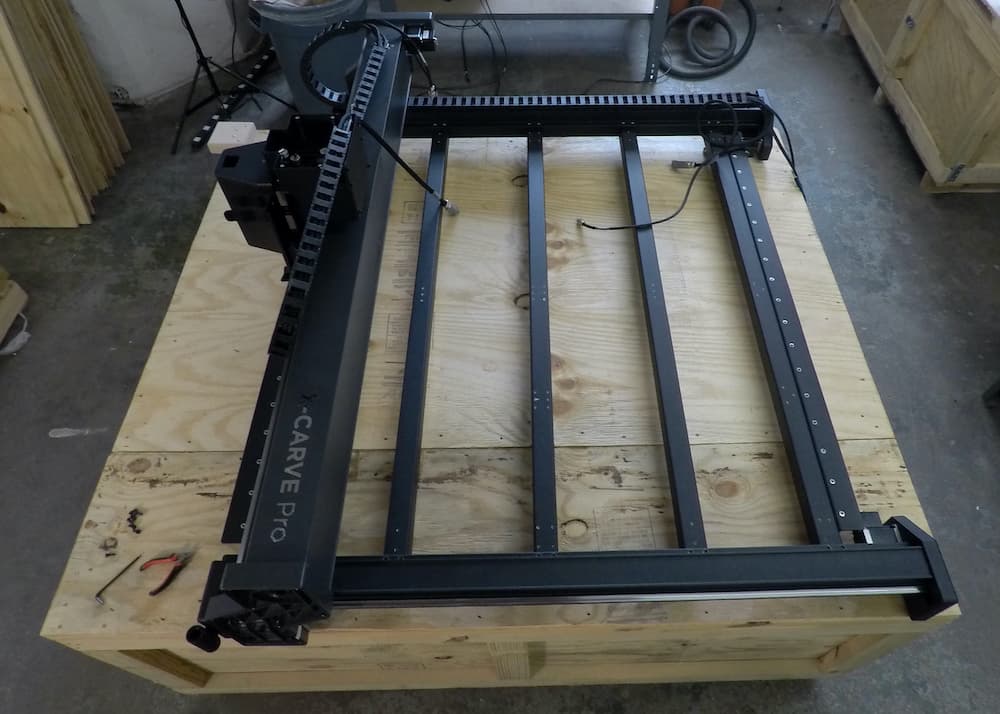 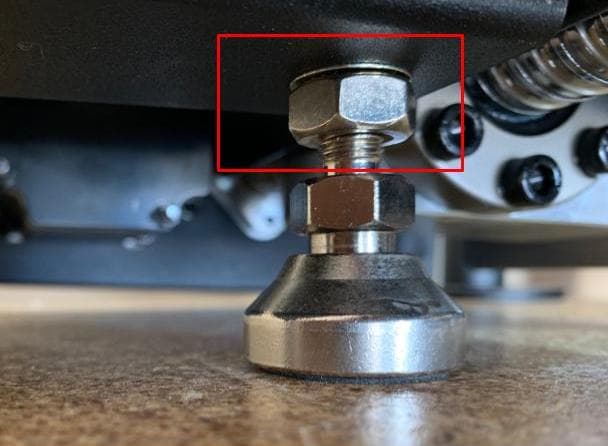 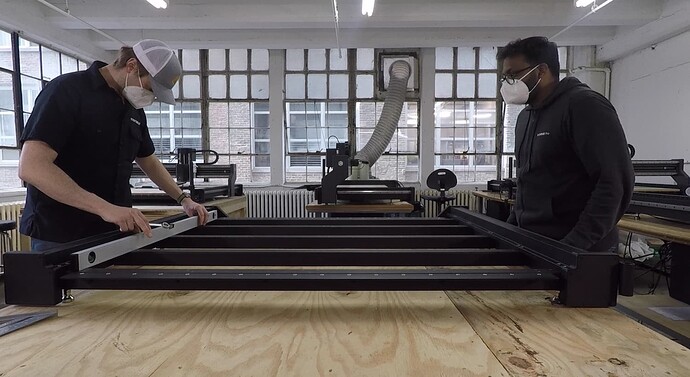 As Neil said, you may want to make supports to go along the middle.
I have a different model CNC that has (about half a many) cross supports as the Pro, So I set my table saw up and ripped some strips of MDF to place under the frame so support the frame to the Table top below it. No more issue of sag or movement when pressed down on since the table was designed with a torsion box style it doesn’t move at all! Some sort of continuous support underneath will fix your stability/sag issues.

Separate note: I think I physically cringed at the photo of a bubble level being used during assembly as level to earth makes no difference in the assembly of a cnc… the goal is co-planar and perpendicular where appropriate. With that said, the use of leveling feet are a joke and what are actually making your issue worse than it needs to be!! I’d ditch the leveling feet and use a solid support underneath to those cross beams.

The entire instructions for building explains the need for a level table, which then leads to just ensuring the pro is leveled on the tabletop. I’m not sure I see leveling feet on the bottom of the pro as anything different than having leveling feet on the bottom of the CNC table. However, having only 6 feet on the outside edges may not be sufficient. There are mounting holes in the middle of the three main crossbeams, I might consider adding three more feet, depending on what support comes back with.

I did get a response from support, but it was asking for general information. I’ll be sure to update once I get something tangible.