Hey, is there any way to add some visual or audible indicator to the signal from the probe connected to A5? I am worried when using the probe that I am going to destroy something if the probe gets disconnected by mistake

Nice I tried something similar like that but the led is very dim. I’m going to try again

No, no, that won’t work. A5 is only held high by a weak internal pull up. The current through the LED would be less than a mA. And because the pullup resistor is probably really large, the voltage at A5 would be close to 0V.

Besides, that isn’t what OP wants. He’s afraid that he’ll lose connection to his bit, meaning when it makes contact then A5 won’t go to 0V. Monitoring A5 won’t tell you whether there’s a broken connection.

OP, the only option you have is to make a more secure connection between your A5 and the bit. A few suggestions I can make are:

You know, some days I should just stay in bed.

I’ll try again. This time I actually hooked up the circuit and tested it.

Not quite as convenient, but this would work. Instead of using one clip on your mill use two. One clip would go to ground. The second clip would go to the bottom of the LED. Use a green LED. As long as you have the green LED on you’re good to go. If either clip pops off the mill then the green LED will turn off and you know you might have a problem. 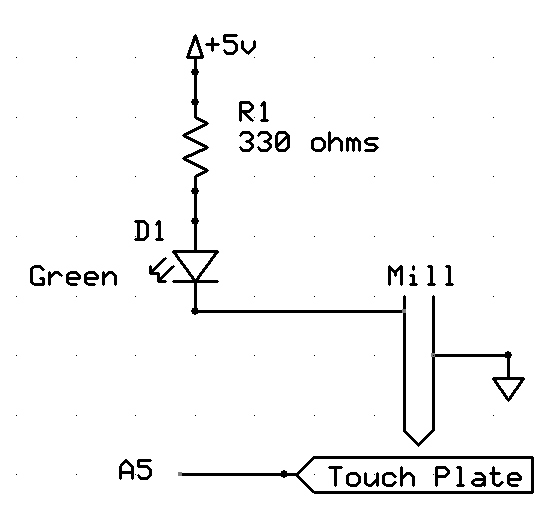 Maybe it was not properly expressed in my question but having a probe led status it would be good enough (ie.: digitalWrite(STATUSLED,!analogRead(A5)) ). I mean, not a probe “connected” led but just the same probe status led, so before calibrating you make 1 contact and visually check that there is a light/beep.

I can make sure what Nathan said is followed, firm connections etc but since I made the probe removable having a quick way to confirm connection is what I need. Maybe a led in the clamp body itself that lights up when I touch ground. (much like what my induction sensor does in my reprap when it engages).

So you are not concerned with a clip coming off, you just want to see that the contact was made?

Basically yes. I can’t find even a software way to do it, only the homing limits are reported

The good news is that you can get the A5 status with the appropriate settings for $10 (status report mask) and the ? (current status command).

The bad news is that it requires version 1.0c of grbl which is not released, but can be used at your own risk.

Changes to the status report for Grbl version 1.0c Troubleshooting

Updates to grbl have changed status reporting in version 1.0c (used in the X-controller I believe). These changes affect the output from the "?" status command to grbl. Information here is based on version 1.0c (edge fork). The status report mask (grbl parameter $10) has two new control bits to select display of the probe pin and control pins' status. The bit assignments are as follows: 7 - Not used at this time 6 - display control pin status 5 - display probe pin status 4 - display homi…