I have been cutting a model airplane from 1/8" birch ply. The file is a commercial one. The parts have many slots and tabs/fingers for interconnecting the parts.

I have been having many problems with the tabs and slots being carved too large (slots) or too small (tabs/fingers). Not all tabs are wrong, not all slots are wrong, but many are.

I am using the standard spindle and a 1/6" bit.

When choosing the cut I select the outline cut option, I also use the Easel tabs feature.

I have included a photo showing the problem 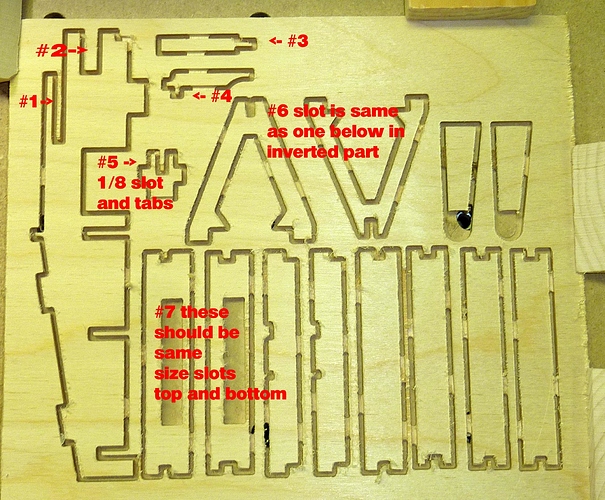 I have included the SVG file where the parts originate

If the 1/8" tab/fingers and slots are not 1/8" the assembly is not going to happen and result in a sloppy fit. Seems like when a slot is cut the path up, then down the slot should touch whereas the path cut wants to have a minimum sspace between the up and down paths.
Can someone explain why the cuts are happening like this. Is it a “bug”?

I do like the improved tabbing feature, it makes removal of parts a snap!

Looks like it may be due to common, setup issues. Belts, v-sheels, motor current, or dying spindle.

That should work, but I think at least part of the problem is that some of the paths aren’t closed (the first and last points aren’t exactly the same). Currently, Easel can only do inner or outer cuts on closed paths. Also it unfortunately doesn’t tell you something’s wrong when you try to do it with an open path—although you should see some red outlines in the 3D preview for any shapes where the toolpaths won’t be where they should be.

It is difficult to cut anything but on the line when the vectors are not closed. You really need to close the vector shapes prior to cutting.

I think real problem is cutting inside slots on outside configuration. Also I’m not sure using 0.0625 bit. It seems .125 bit cut. And for uneven cut problem is not Easel. Either your clamping a little weak, or you have loose belt/Vwheels. Lost position just a little bit, can’t tell the problem. I would be sure machine alignments first, then start separating cuts inside cut and outside cut. That’s all I can see.