Problem with the size of Stars

Hello, recently I have been having issues with carving stars. When carving the stars start out the right size but as easel runs its path the stars start to get smaller and smaller. Does anyone have any ideas as to what may cause this to happen?

If you’re using a V bit and your material is not flat then it will cut some stars smaller. If you’re cutting them with a straight bit then it might be the file.
What bit are you using and can you post some pictures?

I had a similar issue to this a while back. My issue was inconsistent material thickness (like Russell suggested).

This may also be missing steps. This happens when the controller tells the Z to descend, but the router cannot cut fast enough to keep up with the motion. The steppers try to move the router down but they instead miss a step or two. The controller then believes that it has descended more than it actually has. When the controller lifts the Z back up, it lifts up higher than before. After this happens, all cutting is shallower than it should be.

It is also possible that your bit is not snug in the collet and that as you cut your bit is working its way up. This too will lead to cuts that are shallower than they should be.

I’m using a 90 degree vbit the wood appears to be fine. 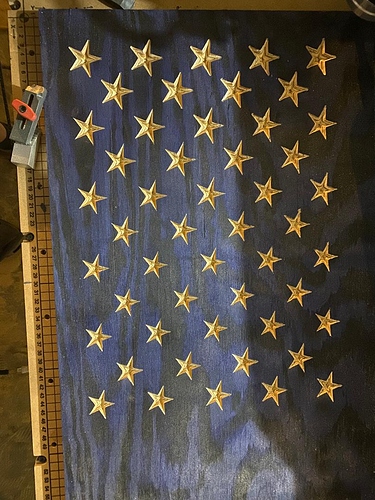 How do I tune and calibrate the X-Carve?

if it happens again, and it will. Block off the ones that cut the deeper depth, rezero close to the shallow runs and rerun your project to make them all consistent. I use rough sawed cedar from time to time and thats how I cheat to make the graphics look more consistent