I have a file that’s been driving me crazy for about a week.

Picture I’ve converted to vector in AI- but no matter what format I try to bring it into easel it will not load. I think my file size is too big (got it down to 11mb) for DXF. SVGs I can pull in but they never load.

From my personal experience, this is a computer memory / timeout issue. I can view the file, the problem occurs when you want to preview or actually carve as it both chews memory and becomes unresponsive in the browser (from a netowork/keep connection alive with the easel servers point of view.

You could try Firefox, as you can adjust the network timeout to solve those issues. Also, you’ll want a computer with at least 32gb of RAMif not more. My experience with large files like this is that you’ll often be able to do the roughing pass, only to have the finishing pass calculation fail.

However, ultimately I think you’ll need to use something other than Easel, and generate g-code.

Thanks so much for your reply and help. In the course of troubleshooting I had my computer guy confirm that my RAM was adequate. He also suggested FireFox due to the manual timeout options (which I also tried).

I cant imagine the frustration if I could rough but not detail it. Thanks for the suggestions!

I think you’d have better luck converting the image to a STL lithopane and using the 3d carving feature and carving it as a 3d relief instead. https://3dp.rocks/lithophane/

Thank you! This worked well and loaded immediately. I did not know about this tool.

You’re the man. Have a good weekend.

Im sure they sell more bits that way, but shit!

Because you’re importing into Easel as a 3D design, ballnose bits are assumed as they are the way to go for 3D - that’s why there aren’t non ballnose options for the finishing pass.

You can also find much cheaper ballnose bits on Amazon - e.g. SpeTool

Got it- thank you James! Have a good weekend

What James said!!
Dont feel tied into using inventables bits, there’s much less expensive options out there… heres the spetools list of ball bits, and you can generally use tapered ball bits for even smaller, fine details on your 3d reliefs, but smaller tips mean more stepovers and a longer carve time…
But ive used their smallest ones with great results 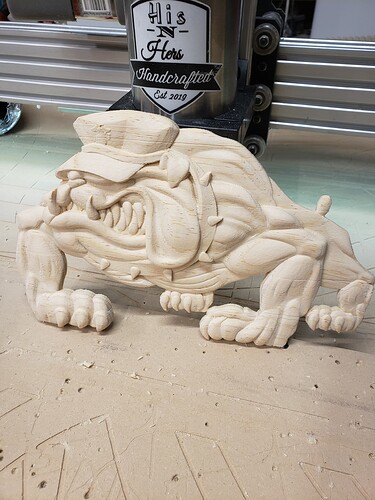