Problems with getting my laser going

ok so here’s the deal I added the 2.8 laser from jtech and so far I got the install to go through. however I’m having problems getting the actual laser to work with easel. at the present time I would just like to burn words into wood later on I will get the picsender and picengrave software when I see fit however I just want to do this for right now. I also have vcarve desktop and will be looking on how to get that up and running also. I know there is a post processer with this and I have that installed also.please help me out asi have spent a couple of days trying to do it. I know its memorial day today other wise I would have called jtech already. heres what I don’t understand

If you bought the X Carve with the electronics included (like most people do), then they shipped an Arduino UNO with GRBL installed already. You either have GRBL version 0.9i or 0.9j which Inventables branched from the main GRBL github development site. Both of these will work fine for most applications, but will leave a slight delay when trying to engrave pictures with PicLaser software. If you just want to cut things and do black and white engraving, then you will have no problems.

If you want to use power control for the laser (via Pulse Width Modulation) the laser command is:

Try reading this: Where is the laser engraving category?

I have read that and I’m not sure where I’m getting with it. I don’t understand all the lingo either much less where to put it in at. I got the post processor to work with vcarve however it doesn’t do the whole design and burns holes into the wood

ok so heres what I have been able to do. I made this in vcarve desktop and I’m unsure of how to get rid of the dots and make the laser stop when moving elsewhere 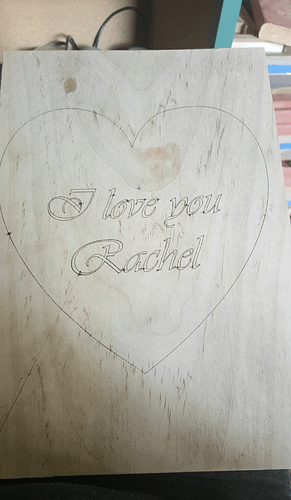 Vcarve generates the gcodes for spindles not lasers, so it sets a S command to turn on the spindle with PWM at the beginning of the file, then rapids to the place to start and that is causing the burn line with the laser. Any hesitation of movement when the laser is on will cause the burn dots.

You may want to consider using Inkscape and the J-Tech laser extension for your vector engraving projects. It will generate the gcodes properly without having to do any editing. When using a laser, higher accels are required for the X&Y axis and that will eliminate the hesitations/dots you are getting. ok thanks so much. now does inkscape do pics also?

does inkscape do pics also

I believe it only traces pics for vector engraving, but I never tried it so I can’t give you a definitive answer. I only use PicLaser or PicEngrave Pro 5 for raster laser engraving photos & logos.

I will buying those once I recoup a bit of my money lol. I also would like some kind of tutorial on how to use it

The Tutorial for PicLaser is in the Help menu and in PicEngrave Pro 5 the Tutorial button appears after loading an image. The Tutorial in PicSender is available by selecting the Info button.

when I’m done with the file in inkscape do I just import it into easel?

Are you talking about a gcode file from Inkscape? If so, I don’t know if the J-Tech Laser Extension generates the gcode compatible with Easel for streaming. We don’t use Easel or Inkscape, so you may want to read these gcode requirements for Easel.

ok then so I guess when using picengrave do I need to flash my grbl or anything of that sort?

You don’t need to flash the J-Tech LaserMode grbl 9g to your UNO if your are vector engraving by turning the Laser on/off with S commands. But it is recommended if you are raster engraving photos with varied intensity with your Laser.

Ok so what do i flash it with to get picengrave to work and will i be able to use the spindle part of it also?

The instructions are where you copied the quotes from at the beginning of this thread. https://jtechphotonics.com/?page_id=3565

The J-Tech grbl will run X,Y & Z commands for a spindle but will not run arc commands or G00 rapid moves. I recommend you copy/paste your original grbl settings to a text file before flashing the grbl firmware to your UNO. The grbl settings will change and you will have to change the majority of them back for your X-Carve, so it’s important you back them up.

well I did that once already and didn’t save it now I have the grbl file cause I found the orginal hex file for it. it think I should be able to do both but it looks like I will have to buy another machine to do both instead of flashing the grbl twice a day

PicSender makes it easy to switch between the different grbl firmware versions and grbl settings.

The Manage GRBL Settings menu is disabled in the DEMO.